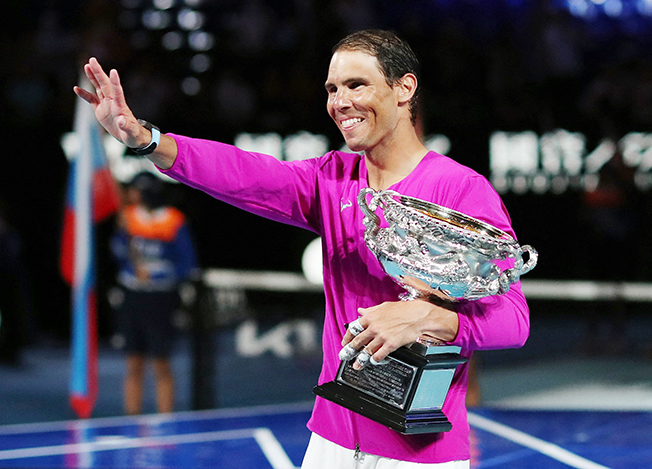 Rafa Nadal roared back from two sets down to edge Daniil Medvedev in a classic Australian Open final and claim a record 21st Grand Slam title only months after fearing his glorious career might be over.

With Novak Djokovic forced out by deportation and Roger Federer recovering from knee surgery, the Spanish great is now one major title clear of his ‘Big Three’ rivals after surviving the 2-6 6-7(5) 6-4 6-4 7-5 thriller at Rod Laver Arena.

“It was one of the most emotional matches in my tennis career,” Nadal said after the five-hour 24-minute epic.

“It’s just amazing now (given) one month and a half ago I didn’t know if I will be able to be back on the tour playing tennis again.

“And today I’m here in front of all of you having this trophy with me.”

Riding a wave of raucous support from the crowd, a vintage Nadal pulled off his greatest escape to deny Medvedev again, less than three years after leaving the rangy Russian heartbroken in five sets at the 2019 U.S. Open final.

In a match steeped in drama that stretched into the early hours of Monday morning, sixth seed Nadal was two points from the title but was broken as he served for the match at 5-4.

He held firm to break Medvedev again and served out the match to love, with a backhand volley the final coup de grace.

Dropping his racket, Nadal shook his head and grinned, then kicked a tennis ball away and pumped his fists in delight.

Tributes flew in from around the world, with Federer and Djokovic quick to congratulate him.

“A few months ago we were joking about both being on crutches. Amazing. Never underestimate a great champion,” Federer wrote on social media.

It was a triumph that defied time and logic, with the 35-year-old Nadal fighting back from a two-set deficit for the first time in 15 years — the last time against Mikhail Youzhny at Wimbledon in 2007.

It came 10 years after losing a five-set marathon to Djokovic in the 2012 Australian Open, which lasted nearly six hours.

Having suffered three other final defeats in 2014, 2017 and 2019, Nadal can now savour a second crown at Melbourne Park, 13 years after beating Federer in another epic decider in 2009.

The long hair and pirate shorts of that era have fallen by the wayside, but the class and fighting spirit endure despite titanic battles with his body.

He missed Wimbledon due to fatigue and the U.S. Open with a chronic foot condition, leaving him on the brink of quitting the sport in late-2021.

Just making the second week at Melbourne Park felt miraculous for the Spaniard, who joins Djokovic, Rod Laver and Roy Emerson as the only men to win all four Grand Slam titles at least twice each.

Often booed and heckled by sections of the shamelessly pro-Nadal crowd, Medvedev admitted the frosty reception had hurt him, and he was still raw hours after the match.

After a lengthy monologue in his post-match media conference, Medvedev said he would gladly skip Wimbledon or the French Open if he could instead play in front of home fans in Russia.

“The kid stopped dreaming. The kid is going to play for himself,” he said with emotion.

“It will be tougher to continue tennis when it’s like this.”

The hyped-up crowd was often unruly and one intruder jumped on the court to protest Australia’s detention of refugees as Nadal struggled to serve out the second set.

After a brief delay as the protester was bundled off court by security, Medvedev went two sets up after sealing the tiebreak and flapped his hands at the crowd with a smirk.

It proved a red rag to a bull as Nadal and the terraces united to harry Medvedev through the rest of the match.

The Russian was left begging for crowd control from the chair umpire as Nadal stormed back into the game.

“They are idiots. No brains. Empty brains. Probably in their life it must be very bad,” he grumbled during a change of ends.

The 25-year-old’s frustrations only grew as the match wore on and his court coverage waned. He frowned as a trainer worked on his left thigh but dragged himself out to make a game of it.

Nadal, however, was not to be denied.

Ten years Medvedev’s senior, with creaky knees and a suspect foot, the Spaniard finished full of running, showing himself and the world that further records may yet be at his mercy.

Microsoft to preview Android apps on Windows 11 next month