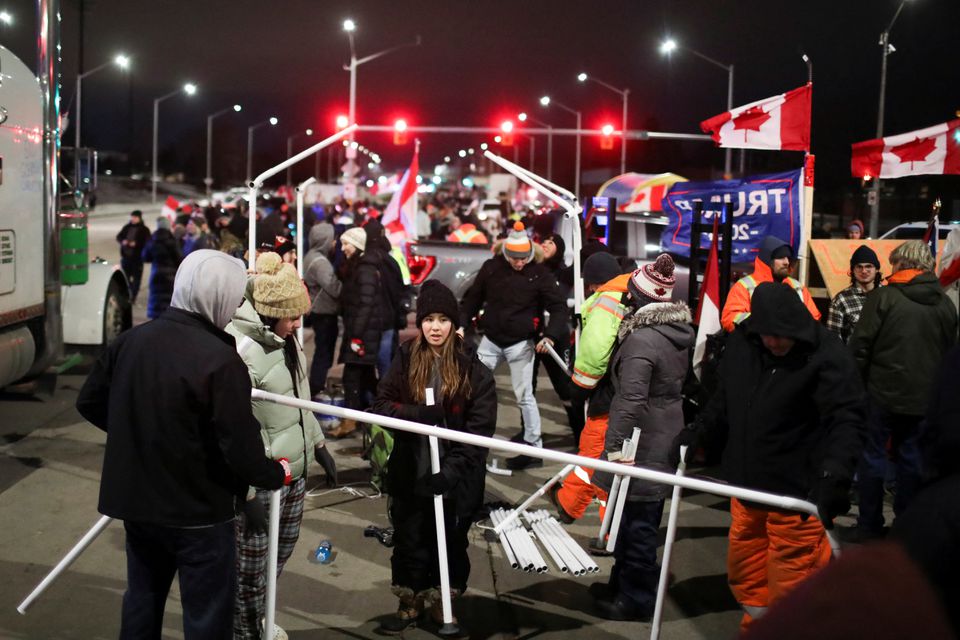 Truck drivers and supporters continue to block access to the Ambassador Bridge, which links Detroit and Windsor, in protest against vaccine mandates, in Ontario, Canada

Canada’s Ontario province declared a state of emergency on Friday and Premier Doug Ford threatened fines and jail terms as authorities came under increasing pressure from the United States to end anti-vaccine mandate protests that has drastically cut trade between the two nations.

The “Freedom Convoy” by Canadian truckers opposing a vaccinate-or-quarantine mandate for cross-border drivers, mirrored by the US government, began with the occupation of the Canadian capital, Ottawa. The truckers then blocked the Ambassador Bridge earlier this week, and shut down two other smaller border crossings.

The closure of the bridge, North America’s busiest international land border crossing and a key supply route for Detroit’s carmakers, has halted some auto output and left officials scrambling to limit economic damage.

“I will convene Cabinet to use legal authorities to urgently enact orders that will make crystal clear it is illegal and punishable to block and impede the movement of goods, people and service along critical infrastructure,” Ford said in a press briefing on Friday.

Ford also pledged new legal action against protesters, including fines and potential jail time for non-compliance with the government’s orders.

Michigan Governor Gretchen Whitmer on Friday said she has been pushing the Canadian government to get the protest under control and that the bridge blockade was hurting her state.

“The Canadian government has to do whatever it takes to safely and swiftly resolve this,” Whitmer told CNN in an interview.

Canadian auto parts maker Magna International on Friday said the shutting of the Ambassador Bridge has started to have some initial impact in some areas of the company’s operations, as it became the latest company to become swept up in the truckers protest. The company’s stock fell 4.4 per cent.

The Biden administration on Thursday urged Canada to use federal powers to ease the disruption.

Canadian Prime Minister Justin Trudeau said he was working with municipal leaders to end the blockade. Public Safety Minister Marco Mendicino said federal police forces would be deployed to Windsor, near the bridge, and to Ottawa.

Mendicino is scheduled to speak with US Homeland Security Secretary Alejandro Mayorkas on Friday, his office confirmed.

Police in Windsor, Ontario, which borders Detroit, said they had received additional resources from outside jurisdictions to “support a peaceful resolution to the current demonstration at and near the Ambassador Bridge.”

In Ottawa, the epicentre of the protests, police were waiting on Thursday for a request for provincial and federal reinforcements to be completed. They have made 25 arrests so far. City police chief Peter Sloly expects the reinforcements to arrive in the next 48 hours ahead of a potential rise in protesters in the city over the weekend.

“This is an entirely sophisticated level of demonstrators. They have the capability to run strong organisation here provincially and nationally, and we’re seeing that play out in real time,” Sloly told reporters.

Canada sends 75 per cent of its exports to the United States and the bridge usually handles 8,000 trucks a day, representing a quarter of all cross-border trade, or about C$500 million ($392.56 million) per day.

About C$100 million worth of auto parts cross the border each day, with many shipments timed to arrive just as manufacturers need them.

While officials at the federal, provincial and municipal levels have held regular meetings, they have had limited impact on the ground.

Windsor Mayor Drew Dilkens has sought an injunction from the Ontario Superior Court to have the protesters at the bridge removed, adding that he was striving to resolve the issue peacefully and ensure that nobody gets hurt.

As many pandemic-weary Western countries near the two-year mark on coronavirus restrictions, replica protests have spread to Australia, New Zealand and France.