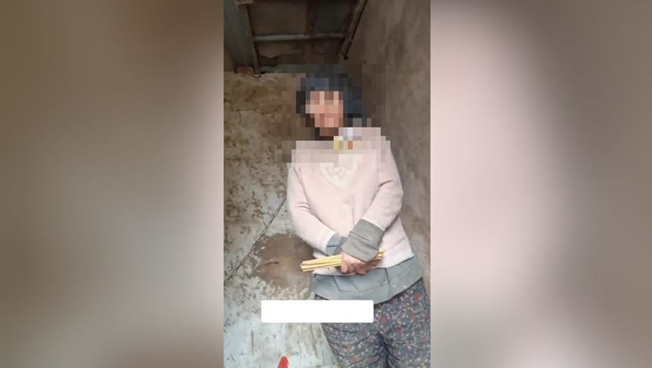 A screengrab of the video posted on social media showing the woman chained up in the cold (Image: Twitter/Manya Koetse)

The Chinese provincial government of Jiangsu will “thoroughly” investigate the facts surrounding a video of a woman chained by the neck, state TV said on Thursday, a move seen aimed at soothing public anger over neglect by authorities.

The case came to light in late January after a video was posted on social media that showed the woman chained up in the cold. Other videos showed her husband listing the names of eight children he said they had together.

The videos went viral on social media, prompting city and county authorities in the province of Jiangsu where she lives to investigate. But anger erupted after the authorities initially said she was mentally ill and dismissed suggestions of human trafficking.

While they later said they had detained three people including her husband and that human trafficking was indeed involved, public indignation has only grown, with critics criticising the handling of these probes as bungled.

It also stirred debate over China’s handling of human trafficking cases, particularly in rural villages around Jiangsu’s Xuzhou city, where the issue has been documented for years as widespread.

The Jiangsu government decided to set up a team to comprehensively investigate the case, “thoroughly find out the facts, severely punish relevant illegal and criminal acts in accordance with the law, and seriously hold responsible persons to account,” state broadcaster CCTV reported on Thursday.

SHINE OFF THE OLYMPICS

Outrage in social media over the case has grown in recent weeks despite the attempts to assure the public as well as attempts by online censors to delete some of the conversations.

Some social media users said the handling of the case had taken a shine off the jubilant mood China was trying to encourage during the Winter Olympics, comparing the lack of attention given to the woman’s case versus state media and government adulation of national athletes such as skiing champion Eileen Gu.

“Instead of caring about the gold medal hanging on some girl’s neck, we should care more about the metal chains around that woman’s neck. That’s because while most of us and our daughters can never achieve the success of the former, it is highly possible that we may accidentally end up as the latter,” wrote Huatu Wangkun on Weibo, China’s equivalent of Twitter.

A number of people who described themselves as alumni of Peking University and Zhejiang University, some of China’s top educational institutes, started online petitions urging the central government to scrutinise local authorities’ handling of the case, though these were by Wednesday taken down by censors.

Some Chinese investigative journalists also published reports about the case, digging up documents that questioned the local authorities’ conclusions.

The latest announcement by the Jiangsu government received over 800,000 likes within an hour, and surged ahead of Olympic-related topics to become the most searched item on the Weibo platform.

Many of the comments urged the Jiangsu government to look beyond the woman’s case and thoroughly investigate the well-documented and long-standing problem in China of women kidnapped by human traffickers and sold as brides to men in villages around Xuzhou city. (

Tour of Green Line for speaker of UK House of Commons