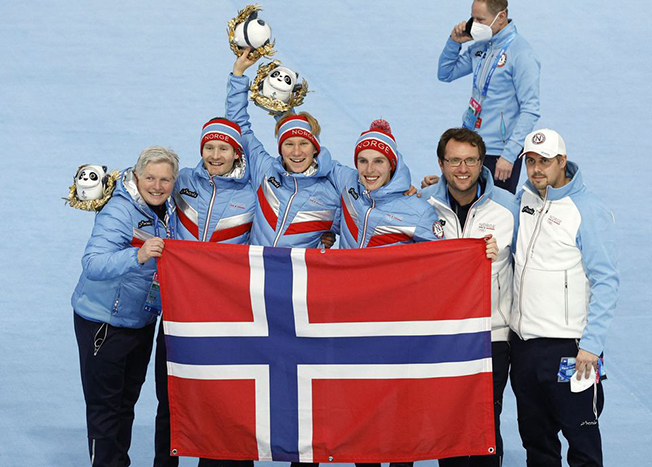 Norway could set a record for the total number of gold medals won by a country at a single Winter Olympics in Beijing but for chef de mission Tore Oevreboe enjoying themselves and creating good relationships is more important than winning.

With Norway’s chances of claiming more gold in the remaining biathlon and cross-country races looking good before the Games close on Sunday, the record is within reach but Oevreboe and the Norwegians measure success in different terms.

“The main objective for us is to make the athletes have fun all the way through the Games,” he said as Norway won the men’s cross-country team sprint for a 13th Beijing gold, one medal shy of the record jointly held with Canada and Germany.

The Norwegians put their winter sports success in recent years down to a three-pronged approach.

“One of them is to have a very high quality of daily training, which is the main thing to do to achieve development over time, and we are also very specific in the work with the competitions, preparations and execution,” he told Reuters.

Creating those conditions for success begins long before the likes of Olympic champions Johannes Klaebo and Marte Olsbu Roieseland get to the elite level.

“This is part of the Norwegian sports model, all the way from the start from childhood – it should be physical activity based on fun, many types of activities, variety, different sports,” the 56-year-old former Olympic rower said.

“Lots of small competitions, but we do not track the results of the athletes.”

Oevreboe prefers an approach whereby youngsters can try as many sports as possible before specialising at a later age, rather than hand-picking talented children for specific events.

He believes the aim should be not just producing great champions but also good Norwegians at every level of society.

“Many of the kids have good opportunities to realise their potential in a variety of fields, and sport is one of them … and then they will develop their potential as humans and citizens,” he said.