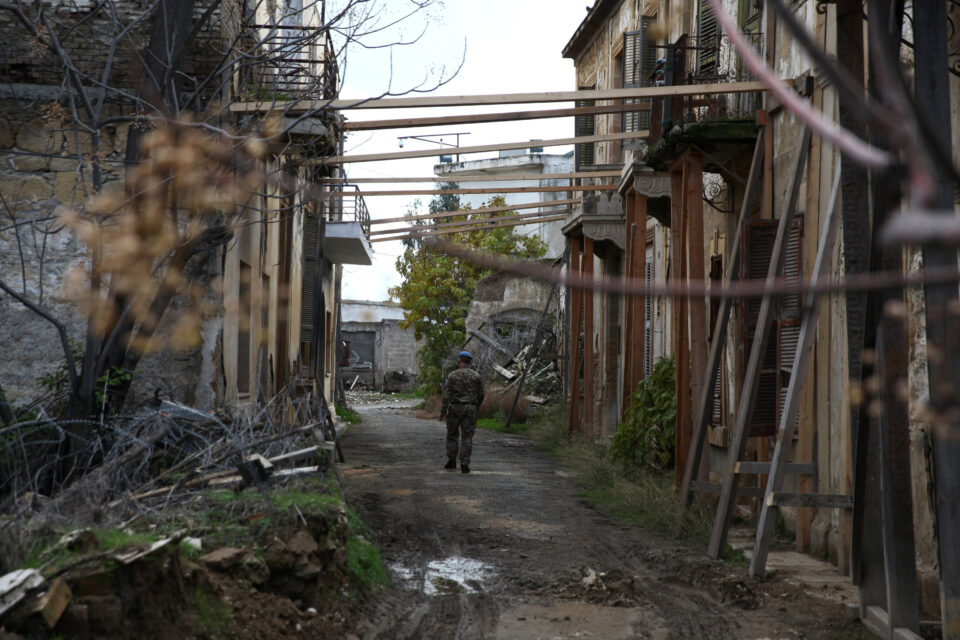 Confidence Building Measures (CBM) are back in fashion, a kind of back-to-the-future effort. Their effectiveness will depend as much on the good will of the parties as on the strategic importance of the locations to perform the role. There is now discussion about a twin Famagusta and the airport in the north. It’s like old wine in a new bottle.

Another opportunity should be put forward as a CBM: that of the buffer zone in the walled city of Nicosia which is confined but symbolically important in many ways. Like any other CBM, it will require good will and give-and-take to open up, conserve the buildings and the infrastructure, and breathe new life into this area.

This small but important location (roughly 1.5 km. long and one building plot deep) spans either side of Ermou street east to west from Famagusta to Paphos Gate, near Ayios Kassianos neighbourhood. It includes some 240 decaying buildings and some empty plots. The technical challenges of conservation would themselves offer opportunities for extensive cooperation between the experts of the two communities. These efforts would build on previous joint projects carried out under the Nicosia Master Plan Project which remains the most successful urban planning collaboration in Cyprus to-date.

There are many strong arguments in its favour. Firstly, it won’t start from scratch. There is a lot of well-developed technical and policy documentation with actionable design and detailed planning guidelines on conservation and how to kick start the first interventions.

Secondly, there is a successful history and tradition of cooperation behind it, Greek and Turkish Cypriot professionals have worked together producing many competent studies and reports on the subject touching also on the problems of their city as a whole.

Thirdly, there has been ongoing interest in the future of this area by several international agencies who may be encouraged to renew their interest and throw their weight behind it.

To explain this point a little further, the pioneer Nicosia Master Plan study covered the entire greater urban area of Nicosia, north and south. It was sponsored by the UN and its offspring, the New Vision for the Core of Nicosia, investigated opportunities and constraints of strengthening the vitality of the central area of Nicosia. It was sponsored by USAID and was followed-up by the technically focused Buffer Zone Study which looked at the actual condition of buildings in the buffer zone itself.

Recently the walled city buffer zone made the agenda of Europa Nostra, aimed at tackling the most endangered monuments in Europe, while a mission by UNESCO experts also expressed concern about threats to these buildings and the loss of cultural heritage they represent and called for urgent action.

Of course there are challenges as well as benefits. If we remain stuck on the former nothing will be done and the buffer zone will lose all that it represents and its potential for ‘gluing the city’ together, to borrow a term from Nicosia Master Plan.

There are significant benefits of two kinds: On the practical side facing the challenges of working together to achieve tangible results will offer an opening for looking at the future differently. The other angle is the longer-term impact of getting people thinking about a common future, which can be a profound contribution to strengthening the social underpinnings of a settlement.

This type of CBM undertaken in the walled city buffer zone which, as studies have underlined suffered most from the long-drawn-out Cyprus problem, offers a chance to revitalise the walled city and for this location to be perceived as the “heart” of Nicosia.

There cultural heritage aspect makes this area a special case. Its historical and intrinsic architectural value are what attracted the attention of several donor organizations such as the Nicosia Master Plan, USAID, Europa Nostra and UNESCO.

Notwithstanding the need to deal with the ‘hardware’ of the Cyprus problem, and Turkey as a major player, our attention should focus more on benefits and less on problems. There has recently been active interest and emerging initiatives for a technology and innovation centre in the buffer zone at a place accessible to both communities. Acting on the buffer zone can unlock opportunities for diverse activities with peacebuilding effects for all.

Glafkos Constantinides is an economist and planning consultant