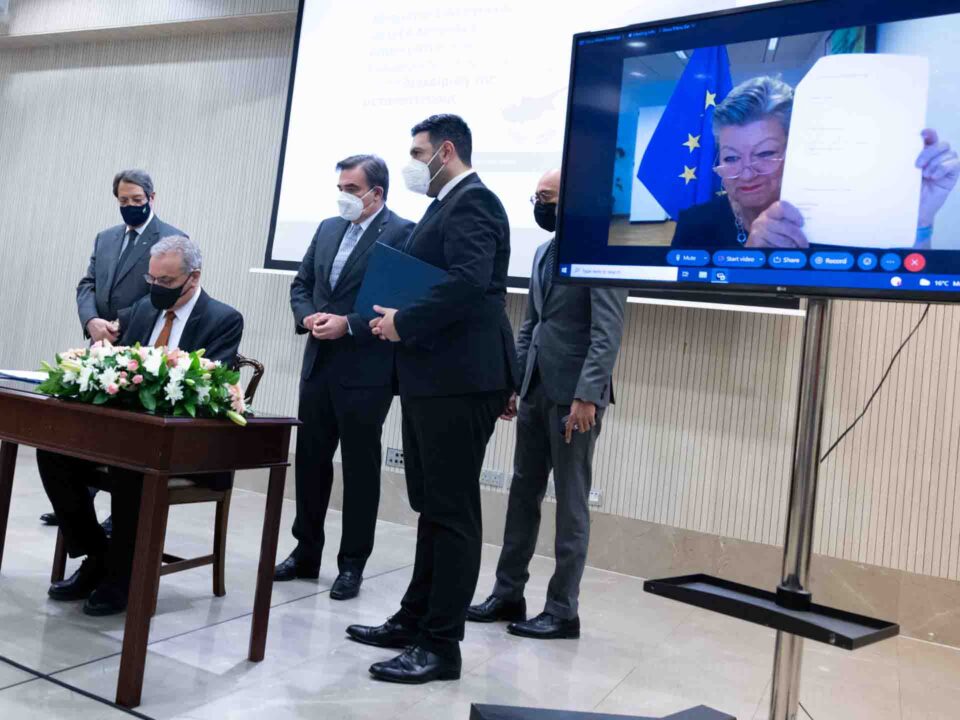 Signing of the agreement at the presidential palace

A memorandum of understanding which attempts to alleviate issues stemming from the migration pressures faced by the Republic was signed with the EU on Monday.

The stated aims of the agreement are to enhance first reception capacity, the implementation of timely asylum procedures, establish effective integration and improve efficiency of returns.

It is the last point – returns – which has most recently become the focus of the Republic’s efforts to reduce the number of migrants and failed asylum seekers.

EU Commissioner for Home Affairs Ylva Johansson signed the memorandum on behalf of the EU remotely, with Interior Minister Nicos Nouris signing for the Republic at the presidential palace in Nicosia.

“It marks the real solidarity of the EU Commission towards Cyprus in dealing with the urgent crisis it is facing,” Anastasiades said.

Schinas struck a tone of EU solidarity, saying that no member state under pressure will be left alone.

“The Green Line is not an external border of the EU, the Green Line is the EU,” Schinas said, adding that the memorandum places into a single framework the commitments and actions required to manage the issue.

He said that the memorandum has identified three key areas for improvement: identifying and dealing with migration flows from Turkey, assisting in asylum procedures through funding while also increasing the number of people returned to their countries of origin.

The memorandum was co-signed by Europol, Frontex and the EU Agency for Asylum.

But while top EU and government officials described the memorandum as ‘historic’, right-wing Elam was quick to dismiss Monday’s events as perhaps symbolic but lacking clear substance.

“Elam emphasises the necessity for the Republic to take substantial measures which will stamp out illegal migration,” a party press release stated.

For his part, Nouris said that while the Green Line is not an external border of the Republic it is the point at which dozens of irregular migrants arrive daily.

He added that the memorandum is proof that Europe is on the side of Cyprus in managing the migration issue.

Nouris also met with Schinas over the weekend as the pair toured sections of the Green Line, an area which the government says is the point of entry for up to 85 per cent of those who seek protection in the Republic.

“What I see here today on the green line, shocks me,” Schinas said. “Under no circumstances is Cyprus alone in this struggle”.

Cyprus, he said, “needs to bear on its shoulders, an extremely large, disproportionate burden of responsibility for the whole of Europe.”

He also said there must be a large wave of returns to their country of origin for those who do not have the right to remain in Europe and he will go to Turkey himself in March to address the issue of irregular migrants.

At a press conference afterwards, Schinas said it was extremely important that Cyprus had already successfully started a wave of returns for failed asylum seekers.

“Now, with the help of both Frontex and us, these returns should be strengthened,” he said, adding that there will be no migration policy in the EU without a very convincing framework for returns. He warned, however, that there was no “magic button”.

Schinas highlighted the difficulties faced by both the EU and Cyprus stemming from the unique challenge posed by the Green Line.

Cyprus faces two main issues, he said, firstly that there is no external border – but instead there is a buffer zone which does not comprehensively act as a point of control and checks. Secondly, he added, it is a small member state which is facing a highly disproportionate migration flows.

“But these are not just Cypriot issues they are wider EU issues.”

Asked about the practicalities of the Green Line, Schinas said that there must be a range of measures taken.

That would include “technological means” and other tools to monitor crossings while also controlling them to a greater degree.

Nouris further detailed that there is a need for physical barriers to help deter illegal crossings.

Rings of Power: They have cave trolls