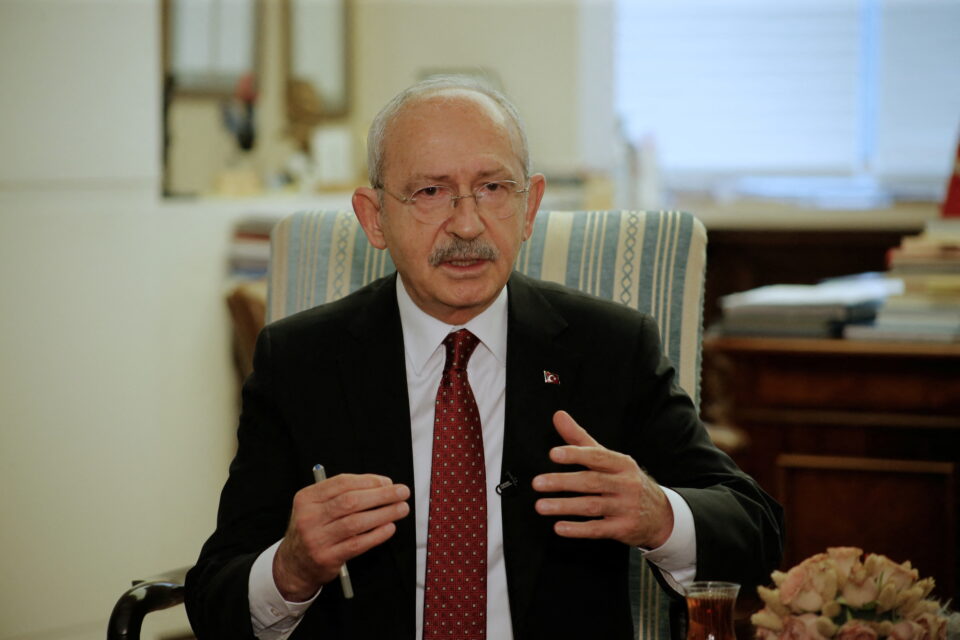 A veteran Turkish political leader who has struggled for years to have President Tayyip Erdogan voted out of office says it is “very clear” that his dream is drawing nearer, even as doubts remain about whether he will be the main opposition candidate at presidential elections set for 2023.

The comments reinforce expectations Kilicdaroglu, 73, will be the presidential candidate of a six-party alliance in elections due by June 2023, though polls show several other opposition figures winning more support.

“Of course, five party leaders pronouncing me as candidate would be an honour. It also means they have trust,” he told Reuters in his office on the 12th floor of the CHP’s headquarters on the outskirts of Ankara.

The six anti-Erdogan party leaders would discuss their candidate later, but first need to agree on economic, social and other policies for their joint platform. It is “very obvious and very clear” that whoever they choose will become president, he said.

Kilicdaroglu said he saw no reason for Turkey’s purchase of Russian S-400 missiles that caused a rift with Washington. He also said he would overhaul the central bank’s leadership if elected.

A former economist and civil servant who lacks the president’s fiery charisma, Kilicdaroglu has lingered in Erdogan’s shadow as the CHP, which he has chaired since 2010, suffered repeated defeats. Erdogan’s favourite target, he has stoically absorbed near-daily criticism and even scorn from the man who has dominated the country for nearly two decades.

Yet Kilicdaroglu and other critics of the country’s authoritarian and Islamist drift sense their time may have come.

Erdogan’s polls have slid to multi-year lows after his unorthodox interest rate cuts sparked a currency crisis late last year, which in turn sent living costs soaring and deepened poverty, especially among the president’s working-class base.

Can Selcuki of Istanbul-based pollster Turkiye Raporu said Kilicdaroglu has grown “bolder and more aggressive”, showing his determination to be the bloc’s candidate. But he remains the “weakest nominee” of the opposition hopefuls and unless his support grows, Selcuki predicted he could still pull out before the vote.

Bespectacled and low-key, Kilicdaroglu earned the nickname “Gandhi Kemal” for his style, and for strategies such as his vow this month not to pay electricity bills in protest at price hikes in the face of near 50% inflation.

CHP parliamentarian Utku Cakirozer said Kilicdaroglu’s ability to build alliances was key to broadening the opposition platform. “He is open to building bridges with different parts of society,” he said.

Though the opposition bloc has not named a presidential candidate, surveys by Metropoll show Kilicdaroglu is far less popular, at 28.5%, than three other possible names and than Erdogan himself, who 37.9% said they preferred in December.

Ankara Mayor Mansur Yavas and Istanbul Mayor Ekrem Imamoglu, both of the CHP, had popularity of 60.4% and 50.7% respectively, while IYI Party leader and alliance bloc member Meral Aksener had 38.5%. A previous Metropoll survey showed Kilicdaroglu was the only potential candidate whom Erdogan would beat.

“These surveys are of no importance for today,” Kilicdaroglu said, adding that Yavas and Imamoglu would continue running the country’s two biggest cities.

Soaring prices recently – including 50% increases for electricity and 55% for food – have pushed more Turks into poverty.

The central bank is widely seen to have bowed to Erdogan after he replaced its monetary policy committee with like-minded members. Asked whether he would replace the committee to give it independence, Kilicdaroglu said: “We would do exactly that.”

“Who will we use the S-400s for? We haven’t received the answer to this question yet,” Kilicdaroglu said. “A large amount of money was paid, and they are currently waiting in storage.”

Erdogan has said Turkey is keeping the missiles despite U.S. objections and the possibility of selling them.

Turkey will send home the millions of Syrian refugees it hosts and re-establish diplomatic ties with President Bashar al-Assad if the opposition alliance wins the elections, Kilicdaroglu said.

“If needed the United Nations needs to get involved, a 100% guarantee should be received from Assad. That guarantee needs to be tied to international accords, that he will not attack them, that their material and life security will be preserved,” he said.

Main opposition Republican People’s Party (CHP) head Kemal Kilicdaroglu, 72, has led the centre-left, secularist party since 2010. Under his leadership the CHP has failed to close the gap with Erdogan’s AKP in parliamentary elections. With support holding between 22-26% in general elections, critics have questioned his ability to push the CHP to the top nationally. Kilicdaroglu was a civil servant who ran the social security institution before entering politics and he is a favourite target of Erdogan’s criticism in speeches. His profile rose in 2017 when he led an opposition march from Ankara to Istanbul to protest the jailing of one of his party’s lawmakers.

Former interior minister Meral Aksener, 65, has risen to greater prominence in recent years as a potential challenger to Erdogan. She was expelled from the nationalist MHP party in 2016 after mounting an unsuccessful bid to oust its long-standing leader Devlet Bahceli. In 2017, she formed the moderately nationalist IYI (Good) Party, which formed an alliance with the CHP in 2018 elections and has 36 lawmakers in the 600-seat parliament. She appeals to right-wing and nationalist voters disenchanted with the MHP over its alliance with the AKP. She has pressed for a return to the parliamentary system which was replaced in 2018 with a presidential one under Erdogan.

After five years as CHP mayor of an Istanbul district, former businessman Ekrem Imamoglu, 51, rose to prominence in March 2019 when he defeated the AKP mayoral candidate in municipal elections. His status as a major new player in Turkish politics was reinforced after authorities annulled that vote and he won a re-run election more decisively, dealing a major blow to Erdogan’s dominance. Backed by an opposition alliance, Imamoglu has succeeded in appealing to more conservative voters beyond the party’s secularist grassroots. He has clashed at times with Erdogan over issues such as handling of the coronavirus pandemic and the president’s plans for a huge canal cutting through the west of Istanbul. He is seen as a potential presidential candidate even as he runs Turkey’s largest city in a term scheduled to run until 2024.

Nationalist politician and lawyer Mansur Yavas, 66, defeated the AKP candidate in 2019 municipal elections in the Turkish capital as the CHP candidate backed by an opposition alliance. Previously he served for 10 years as the nationalist MHP mayor of an Ankara district until 2009. He left the MHP in 2013 and joined the CHP the same year before narrowly losing the Ankara municipal election in 2014. Opinion polls have indicated strong support for Yavas as a potential challenger to Erdogan at the national level after he won praise for his performance as Ankara mayor during the coronavirus pandemic.

Babacan, 54, is an ex-deputy prime minister and former close ally of Erdogan who resigned from the AKP in 2019 due to “deep differences” about its direction. He formed the Deva (Remedy) Party and called for reforms to strengthen the rule of law and democracy. He served as economy and foreign minister before holding the post of deputy prime minister from 2009 to 2015. He was well regarded by foreign investors during his time in charge of the economy.

Davutoglu, 62, served as prime minister between 2014 and 2016 but first came to prominence as foreign minister between 2009 and 2014. He broke with Erdogan’s AKP in 2019 and established the Gelecek (Future) Party. In the first decade of AKP rule he championed a less confrontational foreign policy with the mantra “zero problems with neighbours”, but his Middle East strategy was derailed in the turmoil of the Arab uprisings. He has since criticised what he described as a lurch towards authoritarianism under the executive presidency.