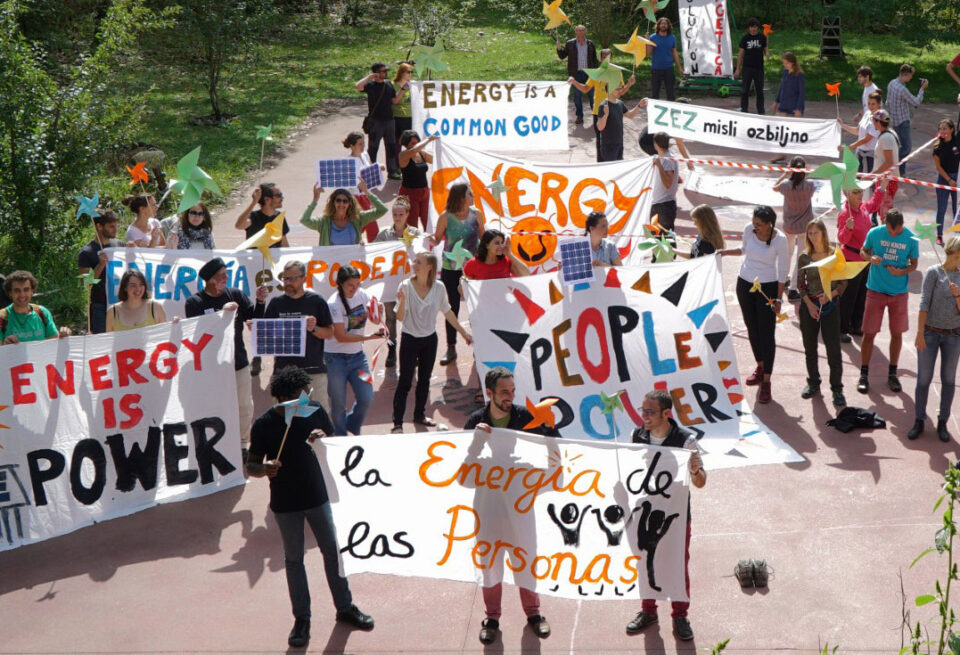 Energy community event by Friends of the Earth Europe

In Sifnos, an island in Cyclades in Greece, a new cooperative has emerged. An energy cooperative has been set up, to utilise the inexhaustible renewable energy sources of the island with a vision to make Sifnos energy autonomous.

Sifnos Island Cooperative is advancing towards the realisation of an energy autonomous plan for the island, that will have the capacity to generate all the energy that is required in the island only through Renewable Energy Sources and promote and implement energy communities.

Renewable energy communities involve groups of residents, social entrepreneurs, public authorities and community organisations participating directly in the energy transition by jointly investing in, producing, selling and distributing renewable energy. Beyond the reduction of greenhouse gas emissions, there are many benefits for the communities involved, including economic development, the creation of new jobs, cheaper energy, self-sufficiency, community cohesion and energy security.

More concisely, renewable energy communities will involve generating energy from renewable sources which are partially or wholly owned by local communities. The energy produced is used by the communities for their own consumption, making them prosumers (producers and consumers at the same time) and making decisions on how this energy will be consumed, produced and even sold.

In the case of Sifnos island, the electricity will be generated from RES installations jointly owned by the inhabitants and the friends of the island who will be prosumers (producers and consumers at the same time). A community led renewable energy production, wholly or partially owned and controlled by communities through partnerships with the private sector, bringing renewable energy to everyone.

In Brixton, London, Brixton Energy Cooperative has led the establishment of three community solar energy projects since 2012, generative renewable energy and bringing financial revenue into the local neighbourhoods where these projects are placed. The communities in this case, produce and consume their own renewable energy and they sell the excess energy to nearby facilities with all the revenue divided by the shareholders of the cooperative.

All over Europe, the energy revolution is gaining momentum. Individuals, communities, cities and local authorities are at the vanguard of Europe’s energy transition: they are increasingly controlling and producing their own renewable energy, and fostering the transition to fairer, democratic and decentralised energy. Community energy has the power to achieve an energy transformation more quickly, fairly and with added social benefits. And it has recently been boosted by new EU rights for people and communities to produce, sell and own renewable energy. The community energy movement has recently received a boost, in the form of improved EU legislation which newly gives communities and individuals the right to generate, store, consume and sell their own energy.

The different legal forms used to create local energy communities include (but are not limited to) cooperatives, partnerships, companies with a community interest, foundations, non-profit organisations, trusts and associations. The legal form depends on needs, and the rules around cooperatives and organisations in each country.

How can this be implemented in the case of Cyprus?

The cooperative must be organised in a democratic, open and transparent way. Members of the cooperative can be consumers or producers of renewable energy. They can financially invest in the cooperative or they can participate as consumers without investing. In all cases of energy cooperatives in Europe, the governance of each cooperative discusses the functions of its members before operating.

Once the energy cooperative is set up, then the local authority (in this case Strovolos) can provide the rooftops of municipal buildings for the installation of solar panels to produce energy. This access to public buildings and facilities can make a difference in kick starting an energy community that does not have any financial support.

In Germany, more than two-thirds of cooperatives use the roof spaces or real estate properties of municipalities to locate their installations. In the UK, the city of Plymouth has made 32 schools and community roofs available to the Plymouth Community Energy for the installation of their solar PV projects. In the city of Frankfurt, in 2013 the roof of the public sport arena was made available for the installation of a PV system financed by 20 residents in the Rhein-MainArea. Yearly reporting made available on the cooperative website shows that the plant now delivers the electricity equivalent of 60 households. In 2017, it mitigated 116 tonnes of CO2 emissions and generated around €44,000. Therefore, the municipality of Strovolos can provide the space to establish this co owned project, or it can partially finance it (or invest). Strovolos residents who will be members of the cooperative can also invest in the installation of the PVs.

Simple. Let’s push for it.

Natasa Ioannou is an environmental biologist working as a project officer for Friends of the Earth Cyprus and the general secretary of Ecological Movement Cyprus. Her focus includes education and public awareness campaigns, as well as activism, community organising and mobilising on environmental justice issues

Smart legal contracts: a new game or the same?