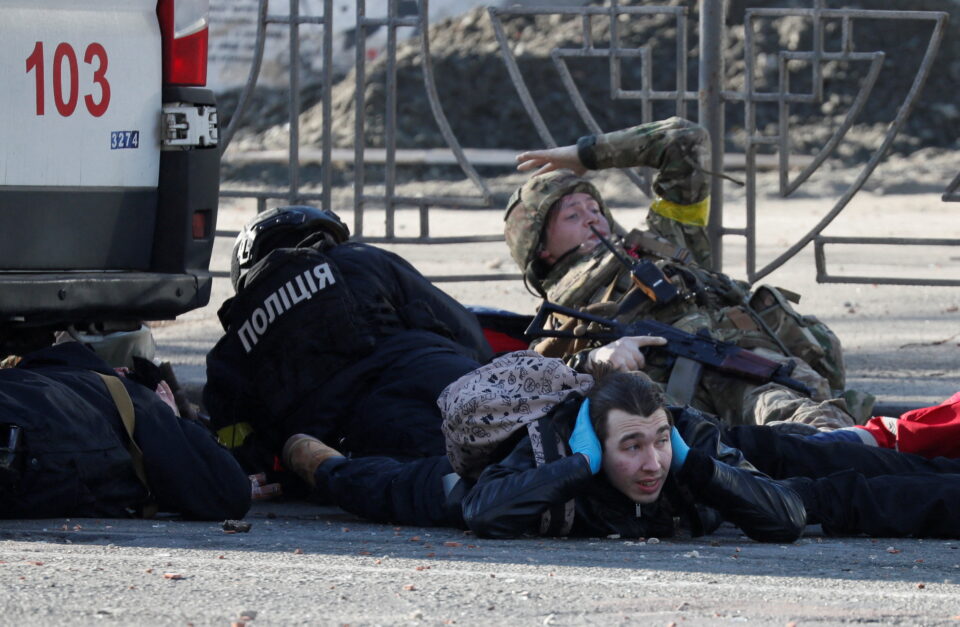 Huge explosions from Russian attacks on oil and gas installations lit up the night sky in Ukraine early on Sunday, while Western allies tightened sanctions to banish major Russian banks from the main global payments system.

Ukrainian forces were holding off Russian troops advancing on the capital Kyiv, President Volodymyr Zelenskiy said as the biggest assault on a European state since World War Two entered a fourth day.

But the night was brutal, with shelling of civilian infrastructure and targets including ambulances, Zelenskiy said.

Casualties from the war are unclear. A United Nations agency reported 64 civilian deaths and Ukraine claimed to have killed 3,500 Russian soldiers.

More than 100,000 refugees, mainly women and children, have poured into neighbouring countries, clogging railways, roads and borders since Russian President Vladimir Putin launched what he called a special military operation on Thursday.

Offering a glimmer of hope for talks, the Kremlin sent a diplomatic delegation to neighbouring Belarus. Ukraine quickly rejected the offer, saying Belarus had been complicit in the invasion.

“The enemy wants to destroy everything,” said the mayor, Natalia Balasinovich.

That blast sent a cloud up into the darkness, though Ukraine’s gas pipeline operator said the transit of Russian gas to Europe via Ukraine was going on as normal.

Russian-backed separatists in the eastern province of Luhansk said a Ukrainian missile had blown up an oil terminal in the town of Rovenky.

Reuters witnesses in Kyiv reported occasional blasts and gunfire through the night, then three blasts after air raid sirens went off shortly before 9 a.m. (0600 GMT).

“We have withstood and are successfully repelling enemy attacks. The fighting goes on,” Zelenskiy said in a video message from the streets of Kyiv posted on his social media.

The United States and its allies have authorized more weapons transfers to help Ukraine fight and imposed a range of sanctions on Russia in response to the assault, which threatens to upend Europe’s post-Cold War order.

On Saturday, they moved to block certain Russian banks’ access to the SWIFT international payment system, making it harder for Russia to trade and for its companies to do business.

They also said they would impose restrictions on Russia’s central bank to limit its ability to support the rouble and finance Putin’s war effort.

“We will hold Russia to account and collectively ensure that this war is a strategic failure for Putin,” the leaders of the European Commission, France, Germany, Italy, Britain, Canada and the United States wrote.

They did not name the banks that would be expelled. An EU diplomat said some 70% of the Russian banking market would be affected. Read full story

The allies initially shied away from targeting SWIFT transfers – a move the French finance minister had called a “financial nuclear weapon” – largely because of concern about the impact on their economies.

Sanctions on Russia’s central bank could limit Putin’s use of his more than $630 billion in international reserves, widely seen as insulating Russia from some economic harm.

Google barred Russia’s state-owned media outlet RT and other channels from receiving money for ads on their websites, apps and YouTube videos, similar to a move by Facebook.

Earlier, the Kremlin said its troops were advancing again “in all directions” after Putin ordered a pause on Friday. Ukraine’s government said there had been no pause.

Russia has not released casualty figures and Reuters was unable to verify tolls or the precise picture on the ground.

A United Nations relief agency said as of Saturday evening at least 64 civilians had been killed among 240 civilian casualties, more than 160,000 people had been internally displaced and more than 116,000 had fled to neighbouring countries.

Ukraine, a democratic nation of 44 million people, won independence from Moscow in 1991 at the fall of the Soviet Union and has pushed to join NATO and the EU, goals Russia opposes.

Putin has said he must eliminate what he calls a serious threat to his country from its smaller neighbour, accusing it of genocide against Russian-speakers in eastern Ukraine – something Kyiv and its Western allies reject as a lie.

Section of Nicosia – Limassol highway closed due to works