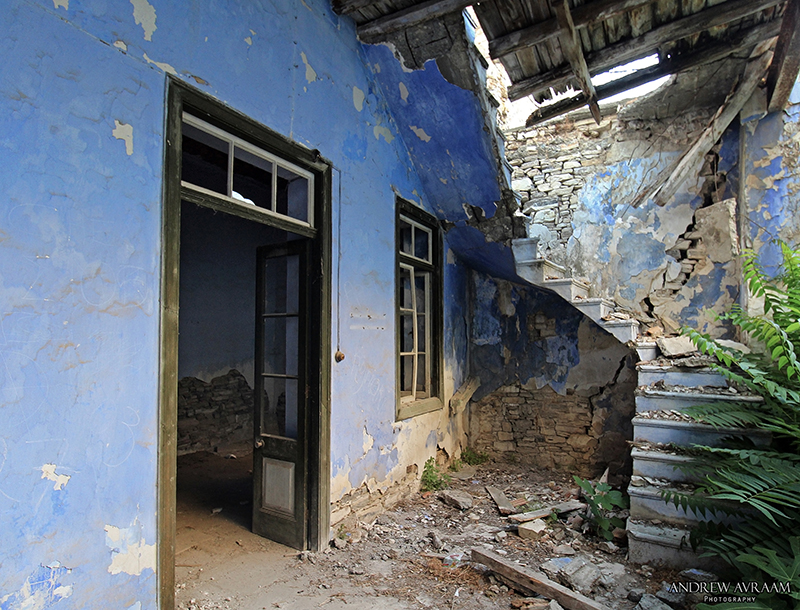 In abandoned spaces, one photographer finds the fascinating tales of lives once lived, stories that are worth sharing with the world. ALIX NORMAN has a look

Andrew Avraam is just 24, but he’s already made a name for himself with his stunning snaps of Cyprus. But unlike many of his generation, Andrew’s interests aren’t sun, sea and sand-soaked selfies: for this young talent, it’s the island’s abandoned places and spaces that fascinate. And his images often tell a story that’s haunting…

“At the age of 15, I was walking through the old town of Larnaca,” Andrew recalls. “And I caught sight of an abandoned building, complete with antique furniture. I got out my camera and took a few snaps – and that was the beginning of my fascination with the forgotten spaces of this island.”

Andrew, who originally hails Aradippou, began researching, planning trips and pestering his parents to drive him to the island’s other forsaken spaces. And though, eight years on, he’s working in marketing and living in Nottingham, he still seizes every opportunity to explore his favourite subject.

“While most people see an abandoned space as an eyesore, I see an opportunity to tell a unique story,” he reveals. “I’m fascinated by the reason for its neglect, and I want to show the world what remains: the mystery, the remnants of a life once lived. It’s about far more than a pretty picture,” he adds. “I’ve learnt so much of the history of Cyprus through its forgotten and abandoned places. We have a history that needs respect and appreciation; without it, we would lose our culture, our identity. We wouldn’t be here today without our past, without the tragedies and triumphs. And that’s a story worth sharing with the world, I think.”

Andrew has a book of his photographs in the works. But before that happens, he’s planning another trip to the island this summer, and has been researching “an abandoned hospital, amusement park, and cinema, to name just a few. The biggest challenge is always gaining access,” he says. “Many times, I’ve worked for months with governing bodies to get permission. But the reward is being able to tell the stories of places that may soon no longer exist.”

Taken in June 2021 in a derelict house in Nicosia’s Buffer Zone, this photo tells the story of lives and loves abandoned to the ravages of war. “It depicts both the serenity of a happily ordered life, and the panic of sudden departure,” says Andrew. “You can clearly imagine how the people once lived; there’s a sadness trapped in the moment.”

THE FORGOTTEN TRAINS OF CYPRUS

“I knew about the Cyprus Railway network, which once carried passengers, mail, and freight from Famagusta to Evrychou,” says Andrew. “And for years, I’d heard rumours of abandoned trains. But it took a huge amount of research to discover the location of this locomotive. Even then, we drove for hours and only happened upon it by accident!”

THE JAR OF POISON

Exploring in No Man’s Land, Andrew entered an abandoned house and found a kitchen caught in time. “I picked up some items to read the tins and get more information on the products,” he explains. “And then I realised that some of the jars contained poison; I don’t know what kind but it was clearly labelled.”

On a trip to the Old Town of Nicosia in 2019, Andrew came across a dilapidated mansion. “I had to balance carefully on an unstable floor, and twist myself into knots to get the right shot,” he recalls. “But there was a beautiful ray of light coming in from the setting sun that cast a serenity over the moment. Even the cat was just chilling!”

“Snakes are a real worry when I’m out exploring in the summer,” says Andrew, “especially in the mountains. Abandoned usually equals overgrown, so you’re never sure what’s lurking in the long grass! This neglected Chevrolet dates back to the 1920s or 30s, and may have been rusting away for decades. I don’t know the make and model of its companion – if anyone does, please let me know!”

Taken in July 2020 in a village near Omodos, this vignette made Andrew feel “curious; it was strange to discover such an intimate depiction of a family in a cupboard outside an abandoned house. It made me wonder who they were, where they lived, what they loved. I recall,” he laughs, “dodging a swarm of bees to take this image – there must have been a hive nearby.”

“I’d studied many government documents on the ruined churches, monasteries, and chapels in the occupied areas,” says Andrew. “But nothing prepares you for seeing them in real life. It’s one thing to read about these places, but quite another to see such devastating destruction in person. I was thrown by sadness; it was difficult to focus and get the shots I needed.”

DO YOU THINK IT HAS NETFLIX?

Taken in September 2018 in a village near Lofou, this crumbling house contained both the old and not-so-old trapped in time. “I was fascinated,” says Andrew. “Ancient clay pitharia lying next to a wooden television, and everything covered in spider webs!”

Characteristic of the unique blue colour of many of Lefkara’s houses, this abandoned building is, says Andrew “typical of the traditional home of the area. It makes you appreciate the unique style of Cypriot architecture – even in decay, there’s a welcoming warmth.”

SHOULD I STAY OR SHOULD I GO?

Taken in June 2021 on a trip to Varosha, this photo of a pre-1974 traffic light felt indicative, says Andrew, of the uncertainty that still lingers. “There’s such an unease to the town; it’s there in the air. I can’t imagine what the residents must have gone through – the split-second decisions they were forced to make.”

Western companies head for the exit in Russia as sanctions tighten