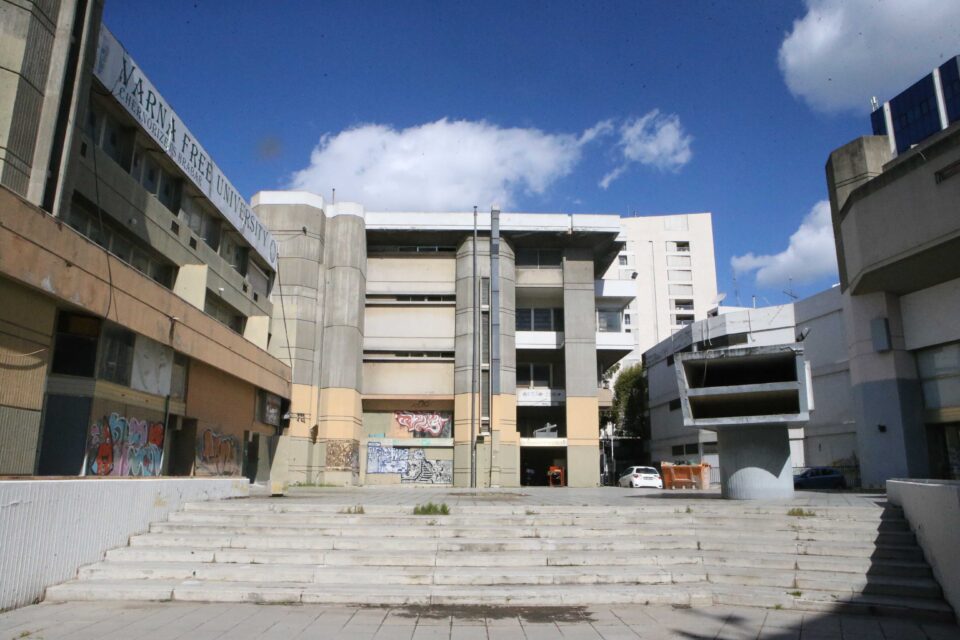 The internal area where teens once congregated en masse, with the entrance to the Zena Palaca cinema to the right (Christos Theodorides)

The Zena complex in central Nicosia was never beautiful, but what was once the main meeting place for 1970s and 80s teens now oozes urban decay

Walking around the Zena complex in the centre of Nicosia is a bit dispiriting. The venerable building looks neglected, its shops largely shuttered, its stairwells daubed with graffiti; urban decay in a nutshell. Still, the situation is more complicated.

Built in 1966, the Zena – a rectangular building complex spanning three streets, with a 780-square-metre courtyard in the middle – has always been iconic, basking in the reflected glamour of Zena Kanther (a.k.a. Princess Zena Kanther De Tyras), the woman who built it.

Kanther’s story is remarkable in itself, born dirt-poor in the village of Tala and ending up a renowned philanthropist and bona fide princess, married to an American millionaire and ‘spiritually adopted’ by a Greek prince, hence her royal title.

The eponymous building was originally intended to be even grander. Foundations were laid for an eight-storey edifice – the plan was to build a hotel – but “my mother became financially embarrassed” according to Theodoros Kanther, who now runs the place (Zena died in 2012, on her 85th birthday), and construction stopped at three storeys.

It was never a particularly lovely building, done in solid grey concrete and influenced by the brutalist style that was all the rage in the 60s – though the top storey adds a row of partitions jutting out between its small windows, for a certain crenellated effect. Yet the Zena became a landmark and a meeting point.

There was the Zena Palace cinema, for a start, dominating the north side of the complex. Then there was Piccadilly on the east side, a snack bar and pinball arcade where hordes of youths would gather in the 70s and 80s – plus another cinema (the Diana 3, later the Metropole) across the street and Makarios Avenue a few feet away. The area was buzzing, with the Zena at the hub of the action.

Nostalgic Nicosians of a certain age will pine for those days if they walk past the building now – especially the south side along Zena Kanther Street, which is derelict and has been for ages. The shops are empty and dusty, plastered with ‘To Let’ signs. ‘We are moving, and will be with you again from July 1, 2020’ reads a sign on the window of what used to be Station Tattoo, an indication of how long the place has been shuttered.

Signs of life persist, especially on the east side (opposite the parking lot that was once the Metropole) where the old Piccadilly is now Utopia Coffee, run by the same family. Tenants still occupy some of the office space on the upper floors. The palatial cinema is nominally open too, though only for special occasions like Cyprus Film Days next month. Otherwise it lies dormant, a sleeping giant like the complex as a whole.

Is the giant sleeping, or in fact half-dead? This is where it gets interesting – because the situation is both much better than it seems from the outside, and a good deal worse.

The building’s decline wasn’t inevitable. Two years of Covid devastation are responsible for much of it, closely followed by the many years of construction work that made the area impossible to access. “They closed us off, both front and back,” recalls Soulla Samata of Yellow Submarine, also on the east side.

One might also note that the Zena has been living precariously, so to speak, for years now. Back in August 2014, it was reported that Russian investors were in advanced negotiations to buy the building, knock it down and build a luxury hotel. That particular news turned out to be just a rumour – but Kanther has always been open to offers, at least since the death of his mother, and of course the Zena sits in a prime location. “The idea of selling the building was always there,” he confirmed to the Cyprus Mail.

Yes, it’s a landmark – but “it’s an old building, it requires a lot of maintenance… I’m always making repairs, adding insulation, putting in new elevators. I do what I can. But the income it brings isn’t really satisfactory.”

That said, circumstances seem to be changing. The roadworks are finally complete, at least on two of the Zena’s three streets; Makariou has been elaborately upgraded, the area made pedestrian-friendly and earmarked (at least that’s the plan) as the core of a new, thriving town centre. Even Covid seems to be abating. Nostalgic Nicosians may be overstating the problem, indeed the sleeping giant may be about to awaken.

“Every day I get phone calls from people asking to rent shops,” says Kanther. Two new bars are slated to open soon, on the east and west sides of Zena. Well-known brands are getting in touch, looking to establish a presence in the new shopping area – but will the municipal plan become a reality, or is it too late?

On the one hand, the situation isn’t as bad as it looks; Covid and the roadworks drove away most of the old tenants – but new tenants are now arriving to take their place. On the other, it’s even worse than it looks – because the plan to restore the centre to its old glory may be fatally flawed, the action having long since decamped to shopping malls and discount centres on the edge of town.

“The city’s been de-centred,” laments Samata. “I remember in the old days, around Christmastime, Makariou was flooded with people. Families with kids, walking around. Now it’s all been deadened – they’re pushing people to the malls. People grab their kids on the weekend and go to the mall, they shut themselves up in the four walls like rats.

“That’s the reason why the building is so silent. The whole town is silent. Go walk around and you’ll see.”

It’s unclear what the fate of the Zena will be. The building is indeed a symbol, but probably not in the way the nostalgists think. It doesn’t represent the past, the ‘good old days’ of a more close-knit community.

It represents the future – the future of the city, and two competing versions of that future. It remains to be seen which will prevail.