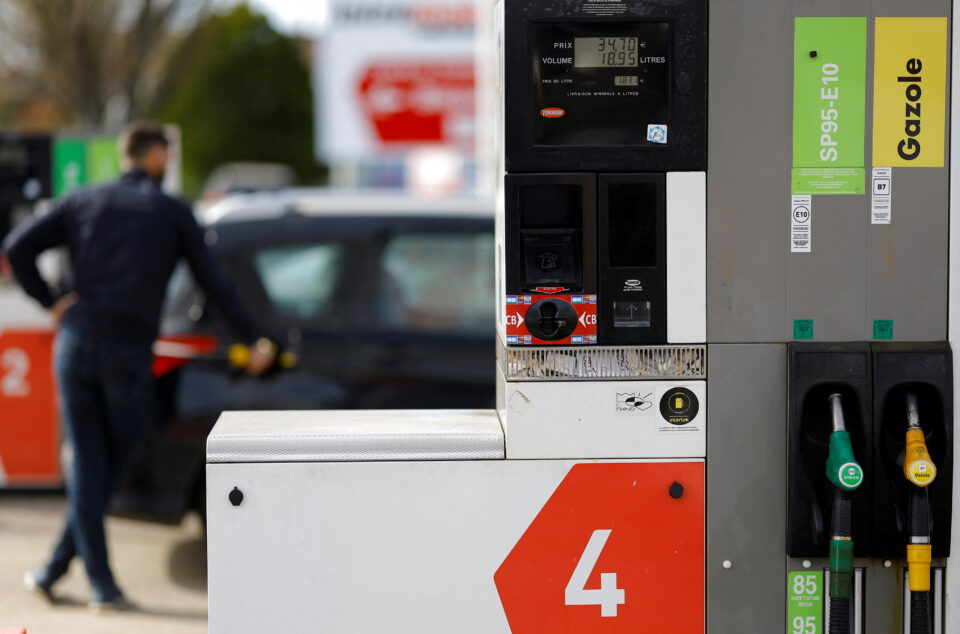 A man fills up his tank at a petrol station in Reze, near Nantes, France

A growing number of European countries are cutting fuel taxes to lower surging pump petrol prices. The move brings respite to motorists but environmentalists say it flies in the face of commitments to curb global warming.

Rising international oil costs, exacerbated by the war in Ukraine, have driven petrol above 2 euros per litre in much of Europe for the first time, placing a huge burden on car owners and industry.

Italy said on Friday it would cut the price of petrol and diesel by 25 cents per litre until the end of April, funding the measure with a one-off tax on energy firms whose profits have surged in the last six months.

France has promised a rebate of 15 cents per litre for four months from April 1 at a cost of almost 3 billion euros for state coffers, and Sweden has announced similar measures. Both countries face elections this year.

However, climate activists and some economists criticise the approach, saying politicians are reneging on pledges to cut fossil fuel subsidies and are responding to the fuel price emergency at the cost of the climate crisis.

“What governments are doing clearly goes in the wrong direction, they should be reducing subsidies that hurt the environment and instead they are increasing them,” said Michele Governatori of the Italian climate and energy think-thank ECCO.

He said countries should offer financial incentives for people to use public transport, car-sharing or other means of ecological mobility. Alternatively, simple cash handouts would provide support for the needy which they can spend on petrol if necessary, but without directly encouraging car use and therefore greenhouse gas emissions.

The EU policy think-tank Eurointelligence called the moves “misguided” and “regressive” because they subsidise middle-class car users instead of helping households least able to bear the brunt of energy price rises.

The petrol price cuts have seen virtually no political push-back in Italy or France, where environmentalists have little weight in parliament, but in Germany the question has exposed the first signs of tension in the three-month-old government.

Finance Minister Christian Lindner from the pro-business Free Democrats has proposed a petrol and diesel rebate worth 6.6 billion euros over three months but the plan is resisted by the Greens, reluctant to back state subsidies for fossil fuels.

The frictions are undermining the unity of Olaf Scholz’s coalition government ahead of an election this month in the state of Saarland, the first since last year’s national ballot.

The Greens and some lawmakers from Scholz’s Social Democrats say a universal rebate is unfair given that car ownership is prevalent among high earners whereas the spike in energy prices is squeezing low-income households, many of whom have no cars.

Economists such as Clemens Fuest, president of the high-profile Ifo institute, have also questioned the cost-effectiveness of the measure. Jens Suedekum, who advises Germany’s economy ministry, said it amounted to “throwing money out of the window”.

The stakes for the environment are high. In its latest report last month the UN climate science panel warned that climate change was impacting the world far faster than scientists had anticipated.

“Denial and delay are not strategies, they are a recipe for disaster,” US climate envoy John Kerry said in a statement accompanying the report, which was largely overshadowed by Russia’s invasion of Ukraine just four days earlier.

Simultaneous heatwaves last weekend at the north and south poles saw temperatures 30-40 degrees Celsius above normal for the time of year.

The Paris-based International Energy Agency (IEA), a grouping of 31 industrialised countries, on Friday urged consumers to travel less, share transport and drive more slowly as part of a 10-point plan to cut oil use in advanced economies by 2.7 million barrels a day within four months, as the war in Ukraine intensifies concerns about supply.

Asked by Reuters whether the fuel subsidies to motorists being adopted by EU countries contradict the spirit of its plan, the IEA avoided any direct criticism.

“Wherever possible, pricing measures should be designed carefully, prioritising the poorest parts of the population and those for whom cars are an indispensable part of their economic activity,” it said in a statement.

The European Commission, which has called on member states to cut greenhouse gas emissions by 55% by 2030 compared with 1990 levels, also avoided criticising governments.

“We understand the difficult situation created by the recent hikes in energy prices and the need to cushion the impact for households and businesses with temporary and targeted measures,” a spokesperson said.