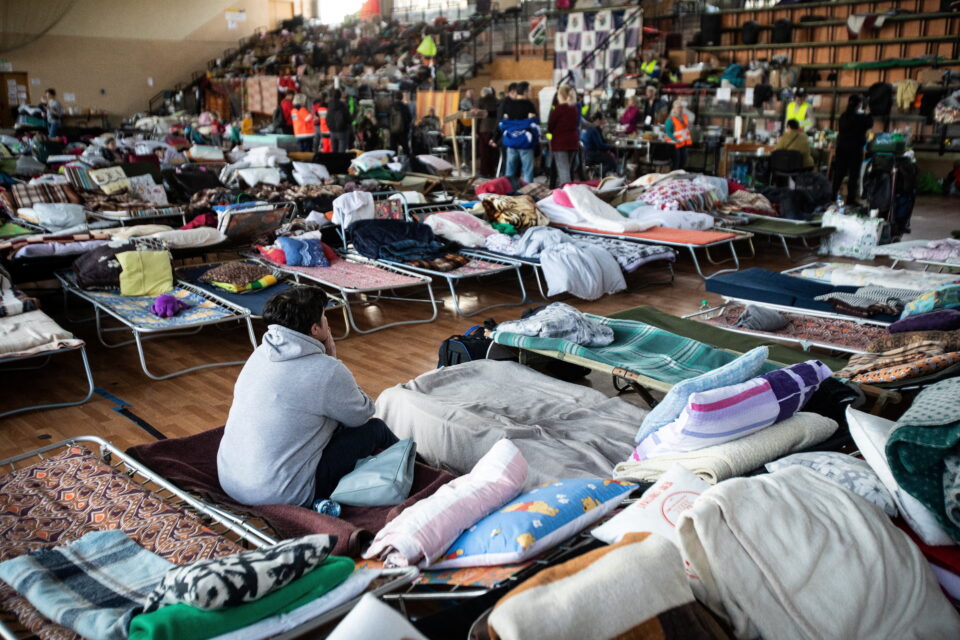 The hall of Hrubieszowski Sports and Recreation Centre which has been transformed into an accommodation facility for refugees in Hrubieszow, Poland, March 21, 2022. Jakub Orzechowski/Agencja Wyborcza.pl via REUTERS

The number of Ukrainians fleeing abroad is now 3,556,924, the United Nations’ Refugee Agency (UNHCR) said on Tuesday, with more than 2.1 million crossing the border into Poland.

“This is another tragic milestone for the people of Ukraine and it has been achieved in just under one month,” UNHCR spokesperson Matthew Saltmarsh told a briefing, adding that 6.5 million people had been internally displaced within Ukraine.

“You are looking at almost one quarter of the entire population. The speed and the scale of this outflow and this displacement crisis is unprecedented in recent times.”

The millions who have left Ukraine since Russia’s invasion began have made their way on foot, by rail, bus or car to neighbouring countries such as Poland and Romania before some travel on across Europe. Most, however, have not done so.

While fewer have crossed borders over the past week, the scale of the task of providing homes to those seeking safety in the European Union is becoming increasingly apparent, above all in Eastern and Central Europe.

Poland, home to the biggest Ukrainian Diaspora in the region even before the war, has taken in more than 2.1 million people and while some plan to head elsewhere, the influx has left public services struggling to cope.

“The number of children of refugees from Ukraine in Polish schools is increasing by about 10,000 per day,” Minister of Education Przemyslaw Czarnek told public radio, saying 85,000 children had been enrolled in Polish schools.

Czarnek said authorities were organising courses in basic Polish for Ukrainian teachers so they could be employed in local schools and teach preparatory classes for Ukrainian children before entering the school system.

With men of conscription age obliged to stay in Ukraine, the exodus has consisted primarily of women and children, many wanting to stay in countries near Ukraine to be closer to loved ones left behind.

In a video posted on Twitter, Mayor Rafal Trzaskowski said 10,000 Ukrainian students had enrolled in Warsaw schools and that a variety of options, including Ukrainian online classes, were needed to avoid a collapse of the city’s education system.

“We will be flexible, we will act, because we want all those young people who are in Warsaw to be able to study, whichever option they choose,” he said.

While border crossings such as Medyka in eastern Poland and Isaccea in northeast Romania have grown less busy, officials are wary that any intensification of the fighting in Ukraine could trigger a new influx.

The head of the U.N. refugee agency (UNHCR), Filippo Grandi, said on Sunday the war had uprooted 10 million people since it began on Feb. 24, most of them still displaced within Ukraine rather than abroad.

Russia denies targeting civilians, describing its actions as a “special military operation” to demilitarise and “denazify” Ukraine. Ukraine and Western allies call this a baseless pretext for Russia’s invasion of a democratic country of 44 million.

More than 500,000 people have fled to Romania, where authorities are sizing up the task at hand while seeking to recruit Ukrainian teachers from among the refugees.

With refugee numbers nearing breaking point in parts of Eastern Europe, Nicolescu said refugees were returning to Romania in the hope of finding a less difficult situation.

“There are people we have personally put on trains to go to the west who we see back at the train station because conditions in countries like Hungary or the Czech Republic don’t suit them,” she said.

Cabinet approves €2.59m aid for farmers for damage to crops

FA to work with Liverpool, City to help fans travel for Cup semis