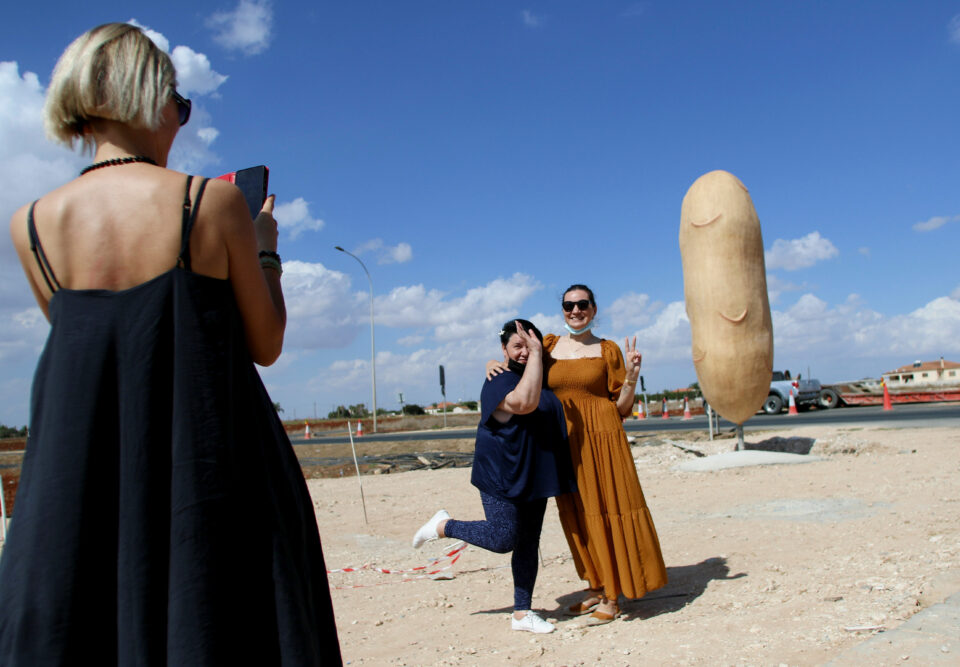 People pose for a picture next to the Big Potato in Xylofagou (Photo: Reuters)

A proposal is being put forward to the local council in Xylofagou calling for the mayor to build ‘a wall of Big Potatoes’ along the borderline with the British base of Dhekelia, partly as a response to the UK edging the village off the map.

Despite the UK having apologised and withdrawn a truncated map that showed Cyprus without the north of the island and without the British bases, the issue is still a sore point, especially in Xylofagou, located on the edge of the Dhekelia base.

The idea comes from a group that met on social media during discussions on the debacle and they have already drawn up a proposal to submit to the Xylofagou mayor on Friday.

This was a fitting date to kick things off as April 1 is the anniversary of the start of the 1955 Eoka struggle against British colonial rule.

The Cyprus Mail contacted the group, which consists of people from across the political spectrum.

Antonis Pavlou, 23, from Xylofagou who has an uncle on the local council, believes it is a great way to send a message and is confident the proposal will receive serious consideration as it would put the village on the map in a way that could never again be overlooked.

Pavlou said although they were calling it a ‘Wall of Big Potatoes’, it would not be necessary to place them side by side due to the cost, but a good number could be strategically placed along six or seven kilometres of the borderline.

“Given what everyone was joking about when the Big Potato was first erected, it’s really the perfect response,” he said. “It will also remind them of the Irish potato famine so it will kill two birds with one stone,” he added, swiftly apologising for the term considering all the bird trapping that goes on in the area.

Pavlou said the proposal was not just about the UK. He said the Big Potatoes would also be a massive boost for attracting quality tourism. “The success of the single Big Potato shows that there is room to make an even bigger statement about the Cyprus potato and many other things,” he said.

Another member of the group, Andreas Miltiadou, 26, said he had spotted a glaring error on the map. “Their version of the island was depicted in white on a blue background but in the centre they put the full map of Cyprus in yellow as it appears on our flag.” He said he could not get over the sheer stupidity, saying someone should be fired simply for that.

Ioanna Christopoulos, 40, a teacher, was angry over the EU’s silence.  She plans to send a petition to the president to take to Brussels. She was sure they would listen to him and impose sanctions at the next EU summit like they did with Russia.

“The EU admitted the whole of Cyprus as a member, but I suppose this is what Brexit gets you. The UK is now a rogue nation,” she said. As for those on the Turkish Cypriot side taking it as official recognition from the UK, “it seemed to escape their notice that the ‘TRNC’ was not on the map at all and there was a big blank where the pseudostate is,” she added.

Maria Yokou, 35, a spokesperson for the bicommunal NGO ‘Give Peace a Chance (GPAC), also joined the group and said she had put aside any political differences she might have with the more hardline members.

“The British just ‘disappeared’ our Turkish Cypriot compatriots from the face of the earth as if they never existed,” she said. Cyprus is one island and this map totally sends the wrong message.”

The Xylofagou mayor’s office said he was not available to comment but was always open to hearing suggestions for the good of the village.

Meanwhile, a foreign ministry source said there would be no more actions against the UK as they had apologised and the map was withdrawn. “However, it might be time Britain stopped redrawing the map of Cyprus. It seems to be a bit of a hobby of theirs every few decades.”

Man arrested for burglaries and theft