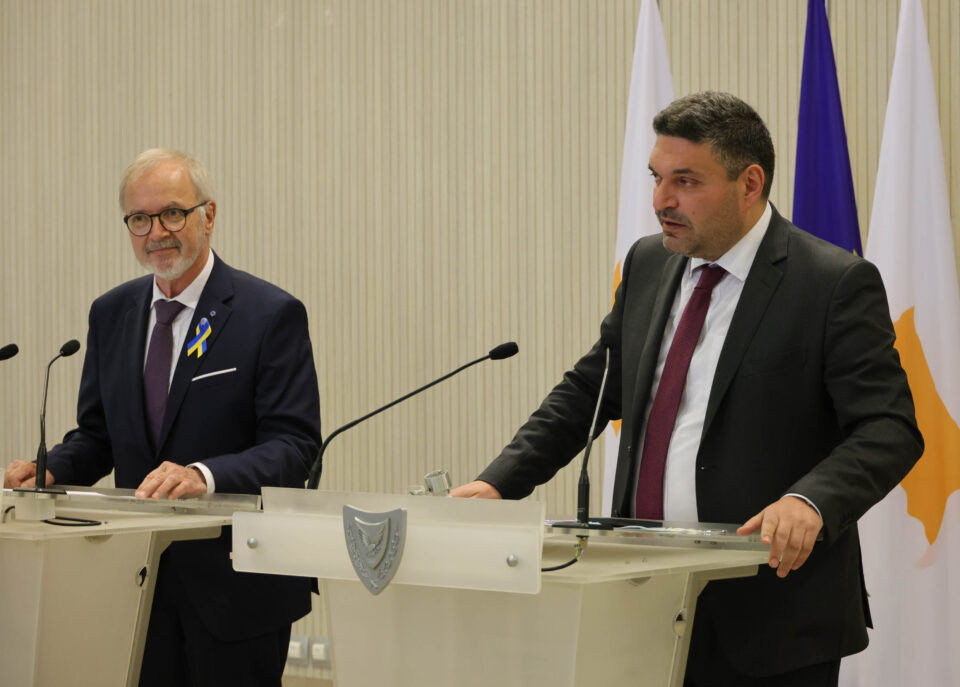 European Investment Bank (EIB) president Werner Hoyer during his visit to Cyprus on Monday confirmed that projects in Cyprus absorbed €303 million during the previous year, with both the private and public sectors benefiting from EIB support.

The EIB president’s visit to the island involved a discussion on recent and future investments in Cyprus, exploring how the bank can further local companies deal with business-related issues related to the coronavirus outbreak.

The issue of road safety in Cyprus and how this can be improved was also a point of discussion.

“This visit provides a timely opportunity to discuss with President Anastasiades and Finance Minister Petrides the positive impact the European Investment Bank is having in Cyprus after another successful year of broad engagement in 2021,” Hoyer said in a statement.

“EIB Group financing has helped Cypriot SMEs create jobs and invest in research and development. Last year, the bank also provided significant support for transport investment in Cyprus,” the EIB president added, noting that the bank is looking forward to working with the Cypriot authorities and businesses on future priority investments.

Cyprus remains the biggest per capita recipient of EIB support, when compared to any other European country, as it has received €2.7 billion or 13 per cent of the country’s GDP.

The EIB Group funding of Cyprus reached €303 million last year, rising by 24 per cent compared to 2020.

The EIB’s support to Cyprus includes the largest ever European Investment Fund (EIF) engagement so far, which was designed to boost economic resilience during the coronavirus pandemic.

Finance Minister Constantinos Petrides said he welcomed the support offered by the EIB to Cyprus in order to cushion the blow of both the recent geopolitical developments, as well as the ongoing effects of the pandemic.

Regarding the conflict in Ukraine, Petrides discussed the EIB’s response to the war and the support it has provided to reduce its economic impact, before expressing Cyprus’ appreciation for the assistance.

“We had a fruitful discussion about Cyprus-EIB cooperation and I express our satisfaction towards EIB staff, in helping Cyprus to fight the economic consequences of the Covid-19 outbreak and enabling us to reduce the economic effects of the pandemic,” Petrides said.

“As a result of the close collaboration with EIB services, in 2021 Cyprus again maintained the position of the most benefited country in Europe in terms of GDP, as regards to EIB financing, an increase of 24 per cent since last year, which demonstrates that the EIB is a committed and reliable partner and has supported our country’s growth in times of crisis,” he added, noting that almost half of the EIB’s exposure to Cyprus was approved after the 2013 financial crisis.

In terms of EIB investments in Cyprus during 2021, these include €170 million in new targeted business financing to support investments by Cypriot companies during the pandemic.

Moreover, €100 million was allocated to Cypriot small-to-medium-sized enterprises (SMEs) and midcap companies, under the second Cyprus Entrepreneurship Scheme, following the successful implementation of the original scheme.

This will be managed by two Cypriot banks, Hellenic Bank and Eurobank Cyprus.

This was used to accelerate the installation of road safety cameras at accident blackspots across the island and facilitate road improvements in Limassol, Nicosia, Paphos and Vassiliko.

“We also had the opportunity to discuss new and additional investments that are planned in key sectors of the economy which include new long-term financing in order to help SMEs and MidCaps overcome the recent economic challenges, urban infrastructure projects, innovation projects, and renewable energy,” Finance Minister Petrides said.

“In this respect, I am pleased that an agreement was reached with the European Investment Fund regarding the Cyprus Equity Fund, the first equity fund in the country supported by public resources, a few days ago,” Petrides added.

The EIB stated that in the coming months it expects to confirm new private financing initiatives with Cypriot banking partners under the Cyprus Entrepreneurship Fund risk-sharing initiative.

Finally, the EIB said that it is also finalising support for urban investment and renewable energy generation projects.

Direct flights between Larnaca and Helsinki