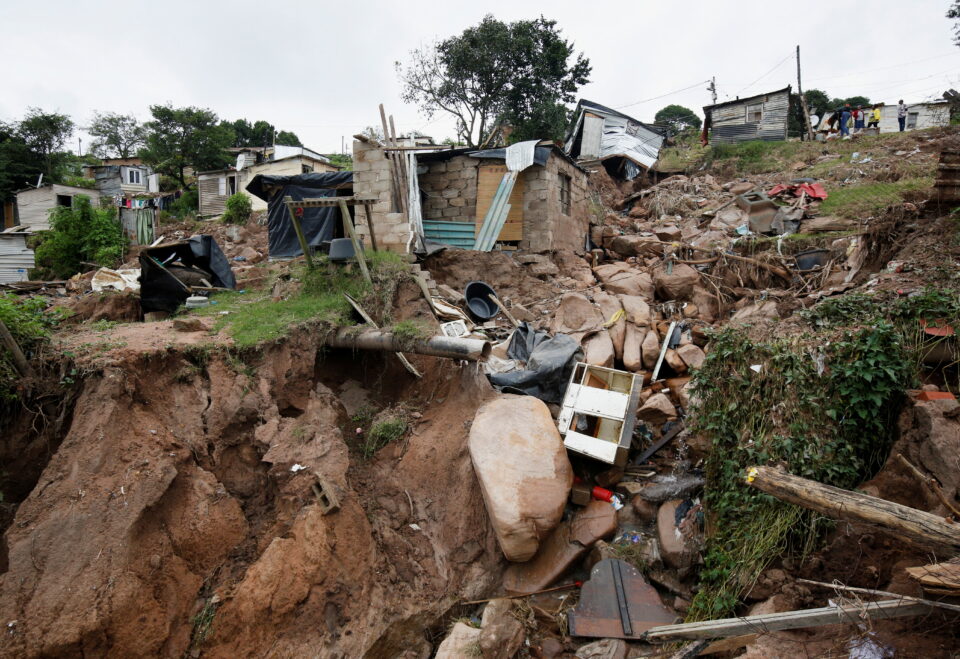 The remains of a home which was destroyed leaving two children dead after flooding are seen in Lindelani, Durban

The deluge has killed more than 300 people in KwaZulu-Natal province, and residents and experts questioned whether the city had prepared sufficiently for worsening weather extremes.

“We don’t have the government’s attention,” complained Siya Gumede, 26, outside his home in Shakaskraal township north of Durban – a home now with only walls after a neighbouring church collapsed onto its roof on Sunday.

“You saw the potholes, there are no streets lights, our taps are empty, there are no stormwater drains,” said Gumede, who had to have his head stitched up after he was injured during the collapse.

While climate activists acknowledged the plan was progressive, they said there was limited evidence it was being implemented.

But measures ranging from better drainage to more careful urban planning will be crucial to limiting losses during weather extremes such as this week’s floods, climate experts said.

“This is a teachable moment,” said Christopher Trisos, a lead author of an Intergovernmental Panel on Climate Change (IPCC) report on climate change adaptation and risks released in late February.

“The IPCC report found that 90 per cent of African cities do not yet have substantial climate adaptation plans, which is extremely concerning,” Trisos, director of the Climate Risk Laboratory in Cape Town, told the Thomson Reuters Foundation.

“But there are still opportunities to adapt.”

Flood-hit KwaZulu-Natal province was declared in a state of disaster by the Cooperative Governance and Traditional Affairs (COGTA) ministry this week, a move that helps unlock emergency funding for hard-hit communities.

In Shakaskraal, petrol tankers lay concealed in thick debris alongside the road after being washed aside by the rain. Cavernous cracks split the tarmac as young children splashed in puddles left behind by the storm.

“We need government to come and check the damage, in time before the next rain comes,” said Sifiso Zhungu, a handyman working in the nearby town of Sheffield Beach.

President Cyril Ramaphosa visited families of those who died this week and observed the extent of the damage by helicopter.

“We are treating this disaster with the level of seriousness it requires,” he said, noting his visit would help decide what resources need to be released to flood-hit districts.

But residents said more work needed to be done preparing for disasters before they hit, rather than simply responding afterward.

“There is a mega influx of people into urban informal settlements desperate for work and we have to adapt. We need proper management and maintenance of housing and sanitation systems,” Hunt said from his office.

Africa is expected to have the fastest urban growth in the world by 2050, according to the Organisation for Economic Co-operation and Development (OECD).

“There is an opportunity as lots of informal settlements are not yet covered in tarmac, so we can still create green infrastructure,” from water-absorbing urban parks to better-draining rivers, he said.

Urban researchers at design firm Arup recently rated the ‘sponginess’ – or water-absorbing capacity – of cities around the world, noting that adding parks, trees and natural drainage can cut both flood and drought risks.

Good building standards that take into consideration the topography of the area and include robust water drainage systems are also essential to tackling future floods, said China Dodovu, COGTA chairperson.

“But the overall pillar is the eradication of poverty and unemployment, as this will ensure that people have the disposable income to build quality housing,” he told the Thomson Reuters Foundation in emailed comments.

Tackling multiple social issues at once – from unemployment to housing and flood resilience – can create “double wins”, said Trisos.

Doduvu said increasingly clear threats from climate change only reiterated the need for the country to reduce its heavy energy dependence on coal – a major driver of global warming – despite stubborn unemployment and inequality.

Economic, social and environmental advances all need to move forward together, or risk failing, he said.

“It is a balancing act because none of these competing priorities can be abandoned. … South Africa’s contributions to reducing global warming are critical,” he said.

How to prove genocide, the gravest of war crimes