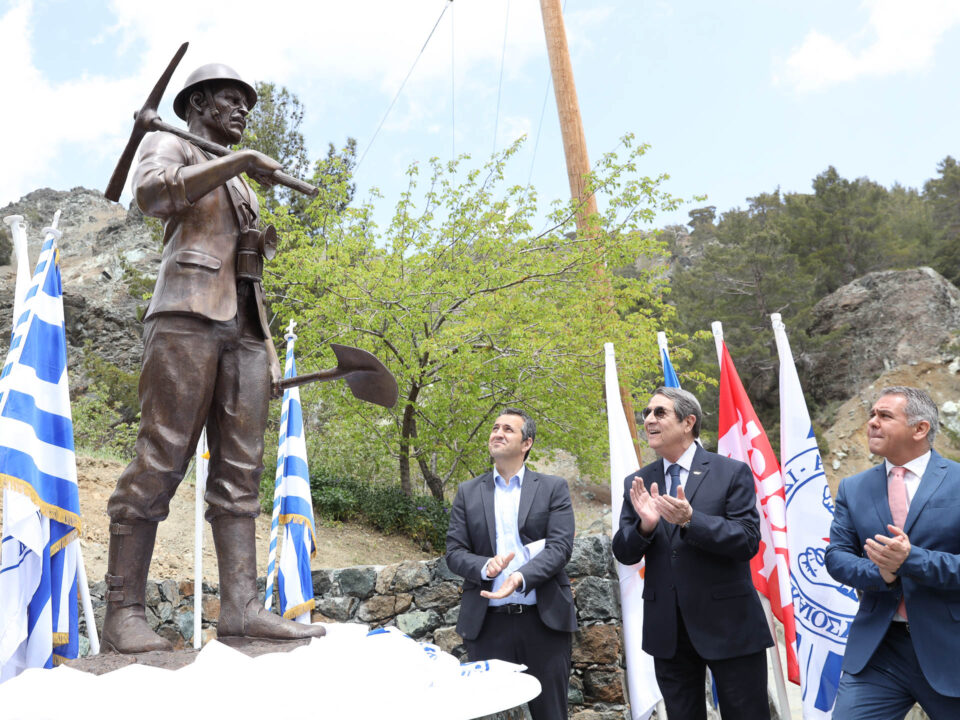 The protection of workers’ rights has been a priority for the government since it came into power, President Nicos Anastasiades said in an event to mark Labour Day on Sunday.

Anastasiades was speaking at an event organised by right-wing union Sek to unveil a monument to miners at Amiantos, where Anastasiades said he spent six and a half years of his childhood.

During the pandemic, the government spent €3.2 billion to safeguard jobs, Anastasiades said, supporting 210,000 workers, and 35,000 employers and businesses.

Improvements for workers introduced by his government, Anastasiades said, were the introduction of a guaranteed minimum income, the gradual restoration of rights abolished in 2012, the reintroduction of the cost of living allowance and the reform of the social welfare system.

Policies that are in the process of implementation include a national minimum wage, the adoption of paternity leave, pension reform and the digital transformation of social insurance services so beneficiaries are assessed quicker.

In its own message for Labour Day, Sek said a collective effort and social dialogue is needed to achieve reforms.

Efforts are continuing, Sek added, to improve wages and other benefits through the renewal, expansion and consolidation of collective agreements, both in the private and wider public sector, with particular emphasis on strengthening provident funds.

It called for the need to build on the Recovery and Resilience Plan, especially for the creation and promotion of decent and quality jobs, fairer employment conditions, a balanced, inclusive and socially just transition to the digital age, gender equality and reconciliation between family and work, successful management of the challenges posed by climate change and the achievement of the objectives that make up green growth, and the European Green Deal, better levels of medical care and safety and health conditions at work.

Sek also called for the completion of social dialogue on the reform of the pension system, ensuring that no pensioners are left below the poverty line, while ensuring the long-term viability of the Social Insurance Fund.

The union also called for the modernisation of the employment strategy for workers from third countries, re-evaluating the real and documented human resources needs and not to use foreign labour as an exploitation option to increase the profit of businesses.

As far as the the national health system Gesy is concerned, Sek said this needs continuous support and not undermining, protecting its mono-insurance character by improving the quality of the services provided and addressing the abuses observed.

As for Amiantos mine, Anastasiades said it is an important part of the modern history of Cyprus and is set to be fully exploited as part of the National Strategy for the Development of Mountain Communities.

This includes turning the area into a holistic ecomuseum.

The Troodos Cultural Foundation will also be housed in Amiantos, with the main aim of highlighting the history of the natural and cultural heritage of Troodos.

However, he said, plans to establish a cable car have not been followed through due to a lack of interest from investors.

Betting against your biological clock