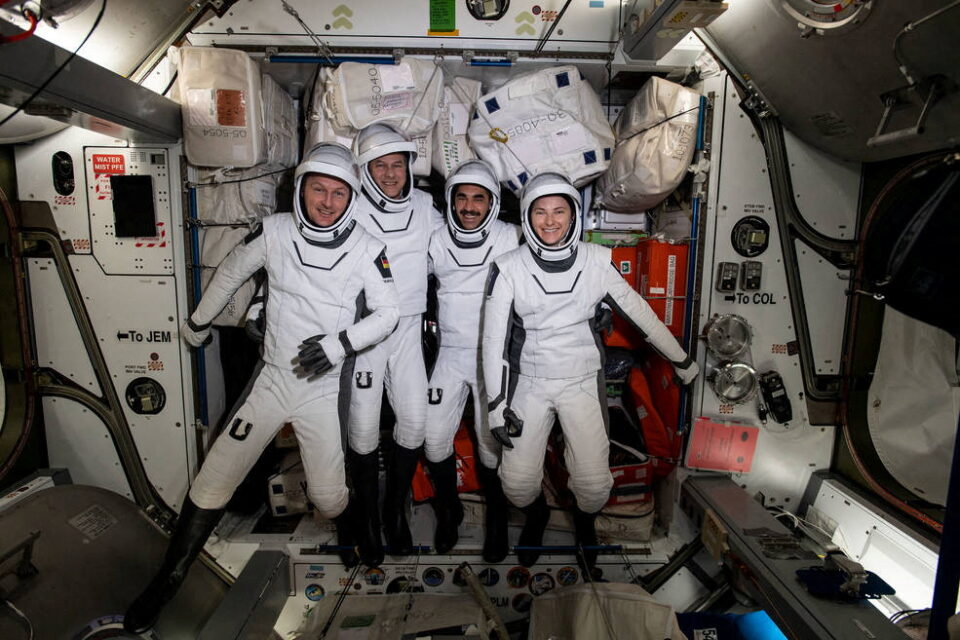 The four commercial crew astronauts representing NASA’s SpaceX Crew-3 mission are pictured in their Dragon spacesuits for a fit check aboard the International Space Station's Harmony module on April 21, 2022. From left, are ESA (European Space Agency) astronaut Matthias Maurer, and NASA astronauts Tom Marshburn, Raja Chari, and Kayla Barron. NASA/Handout via REUTERS THIS IMAGE HAS BEEN SUPPLIED BY A THIRD PARTY.

The third long-duration astronaut team launched by SpaceX to the International Space Station (ISS) safely returned to Earth early on Friday, splashing down in the Gulf of Mexico off Florida to end months of orbital research ranging from space-grown chilies to robots.

The SpaceX Crew Dragon capsule carrying three U.S. NASA astronauts and a European Space Agency (ESA) crewmate from Germany parachuted into calm seas in darkness at the conclusion of a 23-hour-plus autonomous flight home from the ISS.

Camera shots from inside the crew compartment showed the astronauts strapped into their seats, garbed in helmeted white-and-black spacesuits.

It was expected to take splashdown-response teams about an hour to reach the capsule bobbing in the water, hoist it onto the deck of a recovery vessel and open the hatch to let the astronauts out for their first breath of fresh air in nearly six months.

Two sets of parachutes billowed open above the capsule in the final stage of descent, slowing its fall to about 15 miles per hour (24 kph) before the craft hit the water off the coast of Tampa, Florida.

Applause from the SpaceX flight control center in suburban Los Angeles was heard over the Webcast, which showed infrared images of the capsule on its final descent.

The newly returned astronauts were officially designated as NASA’s “Commercial Crew 3,” the third full-fledged, long-duration team of four that SpaceX has flown to the space station under contract for the U.S. space agency.

The company also controls those flights and handles the splashdown recoveries, while NASA furnishes the crews and launch facilities at the Kennedy Space Center in Cape Canaveral, Florida, and manages U.S. space station operations.

California-based SpaceX has launched seven human spaceflights in all over the past two years – five for NASA and two for private ventures – as well as dozens of cargo and satellite payload missions since 2012.

Crew 3 returned to Earth with some 550 pounds (250 kg) of cargo, including loads of ISS research samples.

Aside from carrying out routine maintenance while in orbit some 250 miles (400 km) above Earth, the astronauts contributed to hundreds of science experiments and technology demonstrations.

Barron and Chari performed a spacewalk to prepare the station for another in a series of new light-weight roll-out solar arrays, to be used eventually on the planned Gateway outpost that will orbit the moon.

Crew 3’s return comes about a week after they welcomed their replacement team, Crew 4, aboard the space station. One of the three Russian cosmonauts also now inhabiting the station, Oleg Artemyev, assumed command of the ISS from Marshburn in a handover before Endurance departed early Thursday.

Stellantis revenues rise 12 per cent despite chip crunch, shares up