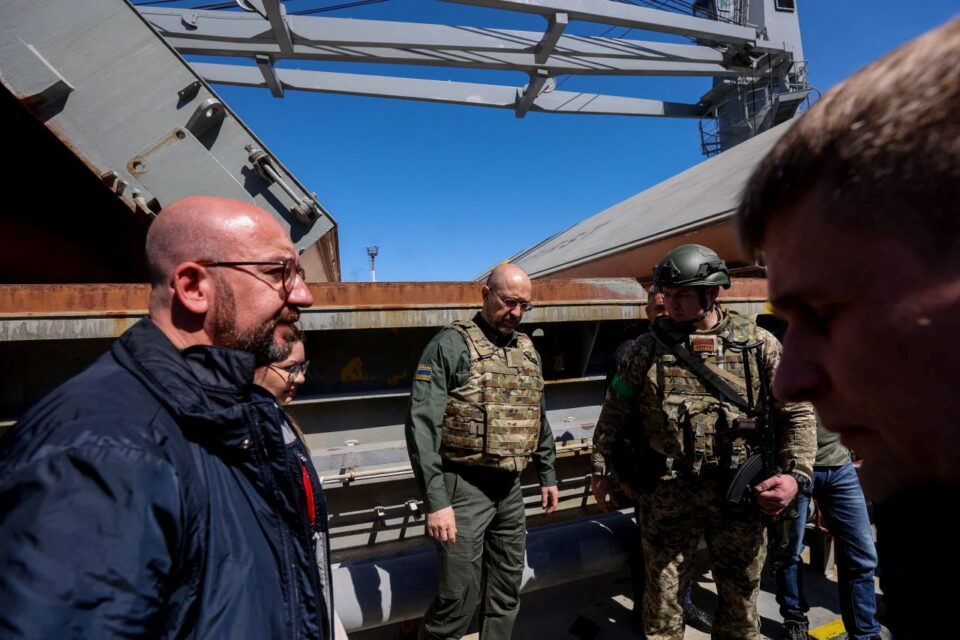 Ukraine’s president said that trade at the country’s ports was at a standstill and urged the international community to take immediate steps to end a Russian blockade to allow wheat shipments and prevent a global food crisis.

Volodymyr Zelenskiy made the comments after speaking to European Council President Charles Michel, who was visiting Odesa – the major Black Sea port for exporting agricultural products where missiles struck tourist sites and destroyed buildings on Monday.

“For the first time in decades and decades, in Odesa there is no regular movement of the merchant fleet, there is no routine port work. This has probably never happened in Odesa since World War Two,” Zelenskiy said in a video address.

“And this is a blow not only to Ukraine. Without our agricultural exports, dozens of countries in different parts of the world are already on the brink of food shortages. And over time, the situation can become, frankly, frightening.”

Ukraine was the world’s fourth-largest exporter of maize (corn) in the 2020/21 season and the No.6 wheat exporter, according to International Grains Council data. But nearly 25 million tonnes of grains are now stuck in Ukraine, a U.N. food agency official said on Friday.

“Immediate measures must be taken to unblock Ukrainian ports for wheat exports,” Zelenskiy said earlier on his Telegram messaging channel.

He did not specify what measures he was seeking. NATO countries including the United States have ruled out armed intervention for fear of triggering a wider war. s country would help Ukraine work out options on how to export stored grain.

Michel, who chairs summits of the European Union’s national leaders, wrote on Twitter that he had seen silos full of grain, wheat and corn in Odesa that was ready for export but blocked.

“This badly needed food is stranded because of the Russian war and blockade of Black Sea ports. Causing dramatic consequences for vulnerable countries. We need a global response,” he wrote.

Russia’s blockade of Ukrainian ports since the invasion on Feb. 24 has added to volatility in international financial markets, sending commodity prices higher.

Ukrainian agriculture officials say the exportable surplus is around 12 million tonnes, and agriculture analysts have said Ukraine’s stocks are so high that there will not be enough room to store the new harvest when it comes.

Ukraine has sown about 7 million hectares of spring crops this year, or 25-30% less than a year earlier, Agriculture Minister Mykola Solskyi said on Monday.

He said Ukraine had exported 1.090 million tonnes of grain in April, but that the sowing was not of the same quality as last year and the sowing area for corn was smaller.

Moscow says its “special operation” in Ukraine is designed to disarm and denazify its smaller neighbour. Ukraine and the West say this is a false pretext for an unprovoked war of aggression by Russia.

‘We will win’, defiant Zelenskiy tells Russia on WW2 anniversary