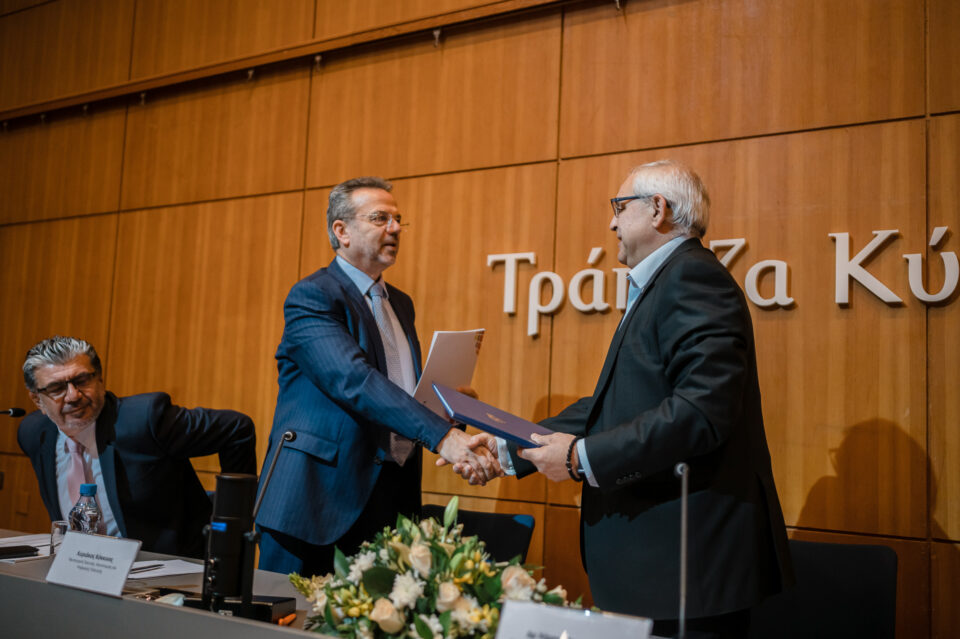 The MoU involves the grant of €100,000 by the Ministry to two innovative start-ups that completed the business creation programme by IDEA, a non-profit startup incubator.

Kokkinos said that the signing of the memorandum lays the foundations for an expanded and productive cooperation for the strengthening of the local research and innovation ecosystem.

The minister added that this will contribute toward building a sustainable future, but will also facilitate the promotion of Cyprus as a regional knowledge centre in the Eastern Mediterranean.

Pouangare, who also serves as Deputy CEO & Chief of Business at the Bank of Cyprus, said that “the bank will continue its multifaceted support to the economy and society, through its multidimensional work”.

Meanwhile, Stelios Himonas, the Permanent Secretary of the Deputy Ministry of Research, Innovation and Digital Policy, underlined the commitment of the state to promoting research and development, saying that it can act as a pillar of development.

He added that this is “clearly reflected in the increased government investment of €150 million for the period 2021-2027”.

Transport Minister Yiannis Karousos earlier this week said that attracting major investments in the real estate sector, as well as the planning and implementation of major technical and construction projects are strategic goals of the government and ultimately aim to improve the country’s infrastructure.

Karousos’ comments came during his speech at the Famagusta Business Forum which took place in Ayia Napa this week.

Moreover, the minister stated that the government, aware of the new situation created by the war in Ukraine, both in the construction sector and the economy, intends to make the most of the opportunities available to encourage and facilitate new investments, for which there is already interest from abroad.

“Development projects, announced by the President of the Republic, with a total budget of €1.2 billion, are already underway or are in the process of starting to be implemented in the near future nationwide, with the aim of improving people’s quality of life,” Karousos said.

An estimated 80 per cent of central banks are considering launching a central bank digital currency (CBDC) or have already done so, according to the 2022 PwC CBDC Global Index, which was released this week.

The index examines and ranks the leading retail and wholesale CBDC projects from around the world, evaluating the current stage of CBDC project development, while also taking into account central bank opinion and public interest.

In addition, China became the first major economy to pilot a CBDC in 2020 with the digital yuan, while pilot programmes are being run in 12 cities, including Beijing and Shanghai, as of March of this year.

The Cyprus Stock Exchange (CSE) ended Friday, May 13 with losses.

The main Cyprus Stock Market Index was at 67.56 points at 13:24 during the day, reflecting a drop of 1.03 per cent over the previous day of trading.

In terms of the sub-indexes, the main and alternative indexes fell by 1.56 per cent and 0.14 per cent respectively.

The biggest investment interest was attracted by the Bank of Cyprus (-1.48 per cent), the Cyprus Cement Company (no change), Hellenic Bank (+1.05 per cent), Petrolina (no change), and Vassiliko Cement Works (no change).