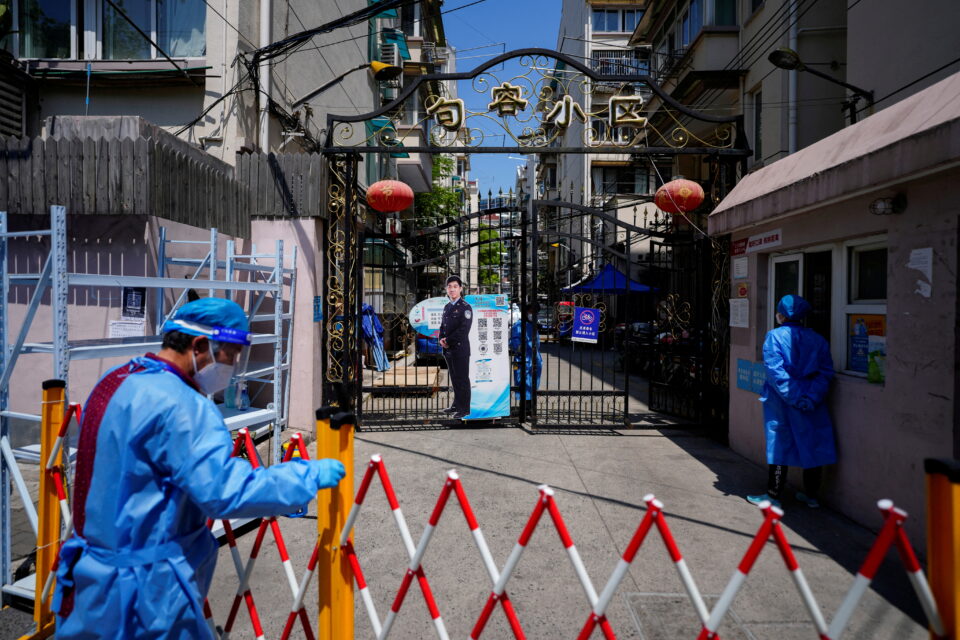 The closed entrance of a residential area in Shanghai

Shanghai was tightening its COVID-19 lockdown for what it hoped would be the final week of its battle with the virus before it could gradually begin to ease restrictions, while Beijing kept fighting its much smaller but persistent outbreak.

China’s commercial hub of 25 million hoped to come out of its painful six-week-old lockdown later this month. Authorities on Saturday were hoping one last round of tightening would eradicate the last infections of the country’s worst COVID outbreak of the pandemic.

Many residents of the nation’s most populous city, allowed to leave their housing compounds about a week ago for short walks or quick grocery trips, have more recently received notices to stay indoors for a three-day “silent” period.

Many buildings were told overnight that restriction would be extended until Friday. Going silent usually means residents cannot leave home and, in some cases, it can mean no deliveries.

Linette Lim, who has spent more than 40 days under lockdown, said her community received such a notice on Friday, a day after its official risk levels was lowered to a grade that in theory should have led to looser restrictions.

“It’s very frustrating because everyone has been asked to make sacrifices, to overcome the present difficulties for the collective good, and people have been consistently complying and coping with whatever is thrown at them,” she said.

“But somehow the goalposts keep shifting,” said Lim. “Nerves are frayed and people have no end goal to look forward to.”

Hundreds of millions in dozens of Chinese cities live under COVID curbs of various degrees. The measures are hurting consumption and manufacturing in the world’s second-biggest economy, and disrupting global trade and supply chains.

Some analysts expect the economy to shrink this quarter. Officials have promised more stimulus measures.

China will offer subsidies, tax breaks and easier loans to boost prospects for college graduates, the cabinet said on Friday, as a record 10.76 million are set to finish college and enter the workforce this year in a weaker economy.

China’s jobless rate hit its highest in nearly two years in March at 5.8%, while youth unemployment was 16%, the highest since July 2021.

The city reported more than 1,500 daily coronavirus cases, down from more than 2,000 the day before – all in areas under the tightest controls.

Cases found in relatively freer communities are being closely watched for clues on where the outbreak is heading. There was one such case detected on Friday, down from four the previous day.

Beijing reported 56 daily cases, up from 50. The capital has been detecting a few dozen new cases almost every day since the first infections of its outbreak were discovered on April 22.

Officials in the capital this week denied rumours of an imminent lockdown, urging people not to panic-buy but to stay at home. Residents seemed to be heeding the advice as many of Beijing’s streets were eerily quiet.

Mass testing across most of the city has become an almost daily routine.

Authorities in the capital had already banned dine-in services at restaurants, closed some malls, entertainment and tourist venues, suspended sections of the bus, subway and taxi systems and imposed lockdowns on some residential buildings.

North Korean leader Kim Jong Un said on Saturday that the spread of COVID-19 had thrust his country into “great turmoil” and called for an all-out battle to overcome the outbreak, while 21 new daily deaths were reported among people with fever.

North Korea made an unprecedented admission of its first COVID outbreak this week and imposed a nationwide lockdown, after reporting no cases since the start of the pandemic two years ago. But there was no sign a rigorous testing or treatment campaign was under way.

“The spread of the malignant epidemic is a great turmoil to fall on our country since the founding,” state news agency KCNA quoted Kim as telling an emergency meeting of the country’s ruling Workers’ Party.

“But if we don’t lose focus in implementing epidemic policy and maintain strong organisation power and control based on single-minded unity of the party and the people and strengthen our epidemic battle, we can more than overcome the crisis.”

Given North Korea‘s limited testing capabilities, the numbers probably represent a fraction of total cases and could lead to thousands of deaths in one of only two countries without a vaccination campaign, experts have said.

The outbreak could also deepen an already dire food situation in the country, with the lockdown hampering anti-drought efforts and mobilisation of labour.

The Workers’ Party meeting heard reports of about 280,810 people being treated and 27 deaths since a fever of unidentified origins was reported starting in late April, KCNA said.

State media did not say whether the new deaths were due to COVID. KCNA said on Friday that one death had been confirmed to be due to the Omicron variant of the coronavirus.

The meeting also heard a report from epidemic control officials that “in most cases, human casualties were caused by negligence including drug overdose due to lack of knowledge of treatment methods”, KCNA said.

Since late April, 524,440 people have shown signs of fever including 174,440 new cases on Friday, KCNA said. About 243,630 have been treated but KCNA has not said how many people have been tested nor confirmed the total number of COVID cases.

North Korea has been testing about 1,400 people a week, according to Harvard Medical School’s Kee Park who has worked on health care projects in the country, not nearly enough to survey the hundreds of thousands of people with symptoms.

‘SHARING THE DESTINY WITH THE PEOPLE’

Leader Kim said the health crisis had been caused by the incompetence and irresponsibility of party organisations, but transmission was not uncontrollable and the country must have faith in its battle to overcome the crisis in the shortest possible period, KCNA said.

Kim offered to donate medical supplies, which had been kept in his household, to be used by families that are experiencing particular hardship “with his resolution to always share the destiny with the people”, KCNA said.

Kim also said health officials must learn from the experience of other advanced countries, including China’s accomplishments in fighting the epidemic, KCNA said.

There was discussion on urgently distributing medicine and adopting scientific treatment for people with fever and other symptoms to minimize casualties, KCNA said.

North Korea said that party officials, workers and youth continued to be mobilized for work to prevent drought damages and for rice-planting in different parts of the country, the KCNA reported separately.

Kim had ordered for economic and farm activities to continue when declaring a nationwide lockdown on Thursday.

North Korea has not reported on the possible source of the outbreak. But a Seoul-based website that reports from sources in North Korea said late on Friday some students of a university in Pyongyang had tested positive after participating in an event on May 1. Leader Kim had also attended the event.

The students had relatives who worked in trade with China and may have spread the virus when they subsequently visited their hometowns outside Pyongyang, the Daily NK website said citing a source in Pyongyang.

Reuters could not independently verify the report.

North Korea‘s border with China was reopened for trade early this year, but in April China suspended freight services between its Dandong city and the North Korean town of Sinuiju due to the COVID situation on its side.