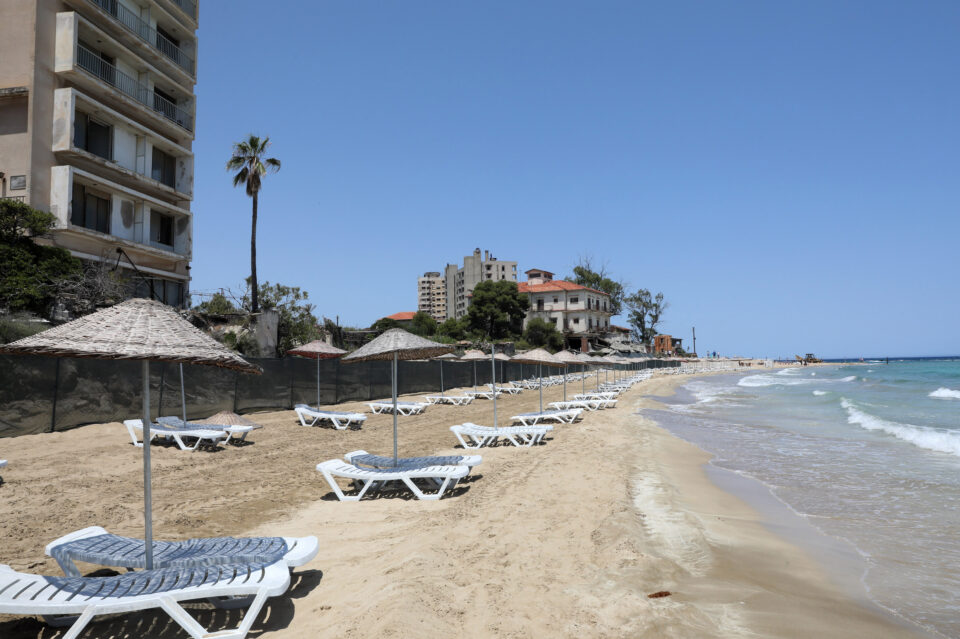 A video, showing a bulldozer clearing a stretch of the beach front in the fenced-off part Varosha while workers were placing sunbeds, sparked the inevitable uproar among Greek Cypriots, all of whom condemned the action of the Turkish side. The beach front stretching from the the King George hotel to the Oceania apartment block will be opened to the public on June 1, reported a Turkish Cypriot newspaper.

President Anastasiades said, “we shall not leave this new provocation to go unnoticed and we shall make all the necessary demarches.” Foreign minister Ioannis Kasoulides asked for a meeting with the UN Special Representative Colin Stewart, to convey his dissatisfaction about Turkey’s actions, while the President of the House of Representatives Annita Demetriou would be informing her counterparts in EU countries about Ankara’s new provocative actions.

The political parties also issued announcements condemning Turkey’s actions, while the head of the Cyprus delegation to the Council of Europe, Disy deputy Nicos Tornaritis, wrote to the heads of all the national delegations asking them to use their influence to stop the new faits accompli Turkey was trying to impose. It was time to prove that we did not adopt double standards, regarding respect of international law, he wrote. Famagusta mayor Simos Ioannou said the US president and EU leaders should show the same sensitivity (as they had done in the case of Ukraine) for an EU member-state, the territorial integrity of which was being violated.

This emotional response is understandable, because every new action by the Turks in Varosha is another reminder that even the fenced off area of the town, which had remained empty, will not be returned at some point in the unforeseeable future, as Greek Cypriots had hoped. But reporting Turkey to the world because it has cleared 150 or 200 metres of a beach front of a deserted town and placed sunbeds on it is unlikely to win Greek Cypriots any sympathy or support. We are deluded if we believe heads of national delegations at the Council of Europe and speakers of parliaments of EU countries would be moved by our complaints about the Turks placing sunbeds on a beach. They may even have chuckle about the Greek Cypriot lack of perspective.

Even the talk of double standards, which appeals to the domestic audience betrays a lack of perspective, at a time when the world is facing the biggest geo-political and economic crises, since World War II. At a time the world is confronted with soaring energy prices, food shortages and rising inflation do we seriously expect international agencies or foreign government to bother, even for a second, with Turkey’s actions in Famagusta or the occupation of Cyprus? Ukrainian towns are being flattened by unrelenting Russian bombing, thousands have been killed, six million refugees have fled their homes and Greek Cypriots are still under the illusion the Cyprus problem matters for anyone outside the island.

Our European partners are aware that we had spurned the opportunities to have Varosha and other occupied territories returned and that our politicians are more concerned with putting Turkey in the dock than solving the problem. Last month there were political parties celebrating the anniversary of the 2004 rejection of the Annan Plan, which envisaged the return of occupied territories, including Varosha to the Greek Cypriots and the gradual withdrawal of the occupation troops. Similar offers were on the table at Crans Montana in 2017, but President Anastasiades used the pretext of Turkish intransigence to walk out, in order to focus on his re-election drive.

And his chief negotiator Andreas Mavroyiannis, who fully endorsed the president’s decisions at the time, now, as a presidential candidate, is lamenting what is happening in Varosha. “Tragic developments in Famagusta, with the bulldozer advancing. More than ever the halting and reversal of the faits accompli is the Lydian stone of the Cyprus solution,” he tweeted on Friday. No apology was forthcoming for the appalling handling of the drive for a settlement in 2017, for the total lack of political judgment and foresight, which was displayed by all in Switzerland and paved the way for what is happening today.

Turkey is violating international law and ignoring UN decisions, because it can do so. Apart from the fact that it is considered an important ally by both the East and West, we handed Ankara an additional argument by our refusal to reach an agreement when it was on offer, twice. Our politicians know that the outside world has no interest in a problem that the people directly involved do not have the political will to solve. They also know that nobody apart from the domestic audience takes their complaints about double standards seriously.

The only chance for a return of Famagusta, which is very slim, if it exists at all, would be for the Turkish side to accept Anastasiades’ confidence-building measures. If we do not proceed with the confidence building measures, “more things will be done (in Varosha), much more than what was done yesterday,” warned Kasoulides. That we are now relying on the Turkish Cypriots to return Varosha for the sake of confidence-building, is what some would describe as clutching at straws.