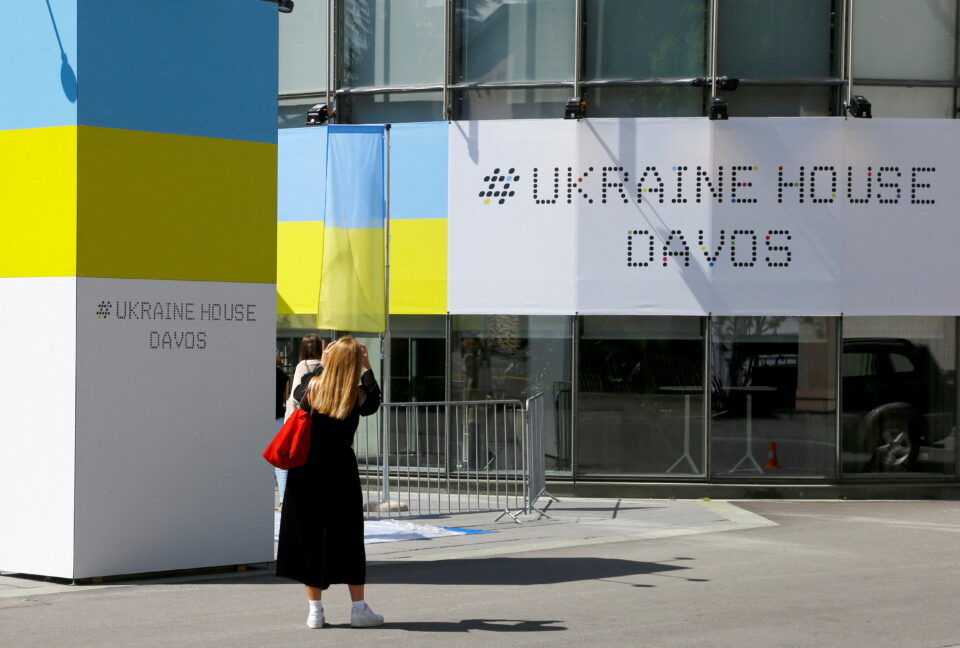 A woman stands in front of the Ukraine House Davos, ahead of the upcoming World Economic Forum 2022 (WEF), in the alpine resort of Davos

Russia would normally have its own “house” at the World Economic Forum as a showcase for business leaders and investors.

This year the space on the dressed-up main street in Davos has been transformed by Ukrainian artists into a “Russian War Crimes House”, portraying images of misery and devastation.

Russia has denied allegations of war crimes in the conflict.

Ukraine is top of the agenda for the four-day meeting of global business leaders, which kicks off in earnest on Monday with a video address by Ukrainian President Volodymyr Zelenskiy.

As the WEF meeting emerges from a coronavirus pandemic hiatus of more than two years, a deferral from January to May means that attendees are surrounded by spring flowers and verdant slopes rather than navigating icy streets.

But not only the weather is different in 2022, with Russian politicians, executives and academics entirely absent.

Russian institutions such as its sovereign wealth fund, state banks and private companies have in previous years thrown some of the most glitzy parties, serving black caviar, vintage champagne and foie gras.

They even hired Russia’s most prominent musicians and pop stars to perform for top chief executives.

Aside from the Ukraine crisis, the post-pandemic recovery, tackling climate change, the future of work, accelerating stakeholder capitalism and harnessing new technologies are among the topics scheduled for discussion at Davos.

On the business agenda, discussions are likely to focus on the souring state of financial markets and the global economy.

After a sharp bounceback from the downturn triggered two years ago by the onset of the coronavirus pandemic, there are now myriad threats to that recovery, leading the International Monetary Fund to downgrade its global growth forecast for the second time since the year began. Read full story

Inflation from hobbled supply chains emerged as a problem last year, in economies such as the United States in particular.

That has been compounded since the beginning of 2022 by events including Russia’s invasion of Ukraine and waves of COVID-19 lockdowns across China that have stalled a recovery.

The Ukrainian artists are hoping to get their message of fighting for a better future to world leaders in Davos.

Visitors are confronted by images such as a badly burned man in Kharkiv after Russian shelling and a film made up of thousands of pictures of dead civilians and bombed houses.

“This is a place where all influencers and all decision-makers of the world come together,” the artistic director of the Pinchuk Arts Centre in Kyiv, Bjorn Geldhof, told Reuters TV.

“What is happening in Ukraine will define tomorrow.”

Russian President Vladimir Putin calls the invasion of Ukraine a “special military operation” to disarm the country and rid it of radical anti-Russian nationalists.

Ukraine and its allies have dismissed that as a baseless pretext for the nearly three-month-old war, which has killed thousands of people, displaced millions and shattered cities

While the WEF meeting may not be back to pre-pandemic levels, with Zurich airport expecting flights numbers of about two thirds of previous levels, its return comes as a welcome relief to the ski resort’s hotels and restaurants.

“It is another step back to normality,” Samuel Rosenast, spokesperson for the local tourism board, said last week.