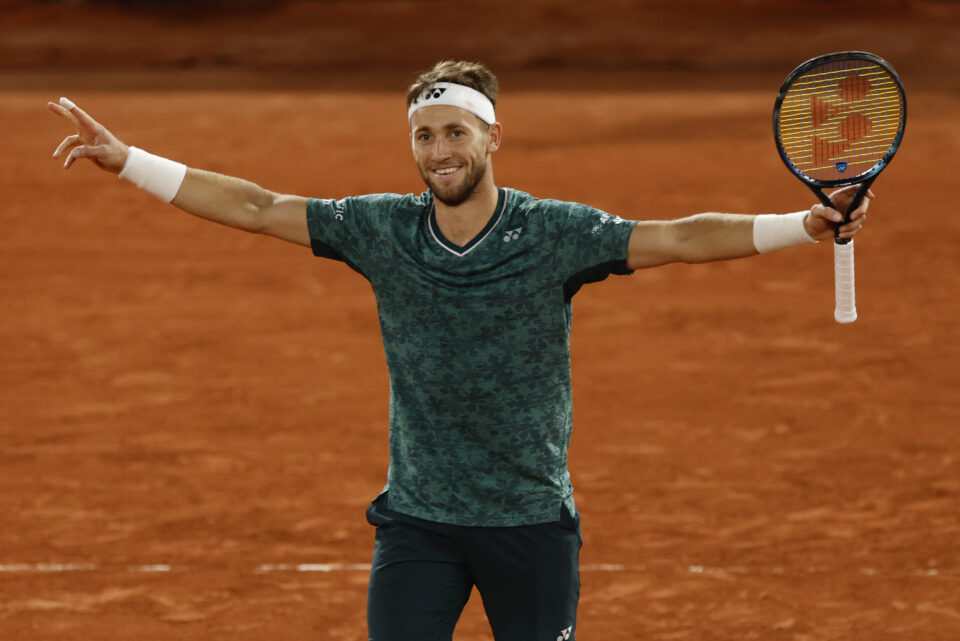 Eighth seed Casper Ruud rallied from a set down to beat an error-prone Marin Cilic 3-6 6-4 6-2 6-2 on Friday to become the first Norwegian man to reach a Grand Slam singles final and set up a French Open title clash against 13-time champion Rafa Nadal.

With his victory against the Croat on Court Philippe Chatrier, Ruud will at least rise to a career-high world ranking of sixth when the list is updated at the conclusion of the claycourt Grand Slam at Roland Garros.

“It was a great match from my side. I did not start great but from that break (second set) I played some of my best tennis this year,” Ruud said in his on-court interview.

“Marin is usually the one who is playing very fast and playing the balls very hard. I figured I need to step up a bit and counter attack and go for some faster shots. That helped.”

Ruud came into the contest with a 2-0 head-to-head lead over former world number three Cilic and a prolific record on claycourts. Before Friday’s match the Norwegian, since 2020, had won a tour-leading 65 matches and seven titles on the surface.

But it was the Croat, 10 years older than his 23-year-old opponent, who drew first blood, breaking Ruud twice in the opening set to nose ahead.

The big-hitting Cilic, seeded 20th, peppered the court with winners from his powerful forehand and saved all three breakpoints he faced on his own delivery.

But Ruud soon showed why he is so highly regarded on clay by absorbing Cilic‘s power with his stout defence in the third game of the second set, forcing his opponent into making an array of unforced errors to go a break up.

With Ruud serving for the set, Cilic had multiple chances to level the contest but the Norwegian fought back from 0-40 down to clinch the stanza with a scorching backhand down the line.

Cilic‘s frustration grew as the lanky Croat completely lost control over his groundstrokes and his unforced errors soared as Ruud jumped to a 4-0 lead in the third set.

The match was interrupted for over 15 minutes during the third set with Ruud serving at 4-1 when a protestor jumped onto the court and attached herself to the net.

Ruud lost the next two points on resumption but recovered to save two break points to hold serve for a 5-1 lead before serving out for the set on his next opportunity.

Another double break early in the fourth was enough for Ruud and he sealed the contest under three hours with his 16th ace of the match. Cilic‘s sorry evening ended with 56 unforced errors — compared to just 21 from his opponent.

Ruud broke Cilic’s service five times in total and on Sunday he will face Nadal, whowill be aiming for a record-extending 22nd major title. Nadal progressed after his opponent Alexander Zverev retired with an ankle injury mid-match.

“He is the last player of the Big Three … that I have never played against,” Ruud said. “I guess it is perfect timing and was worth the wait to finally play him in a Grand Slam final.

“It will be special moment for me, hopefully a little bit for him as well. He has played so many finals but at least he’s playing a student from his academy this time. Should be fun.”

Our View: There is no way round higher fuel prices but to use less petrol

Nadal has another mountain to climb against Zverev