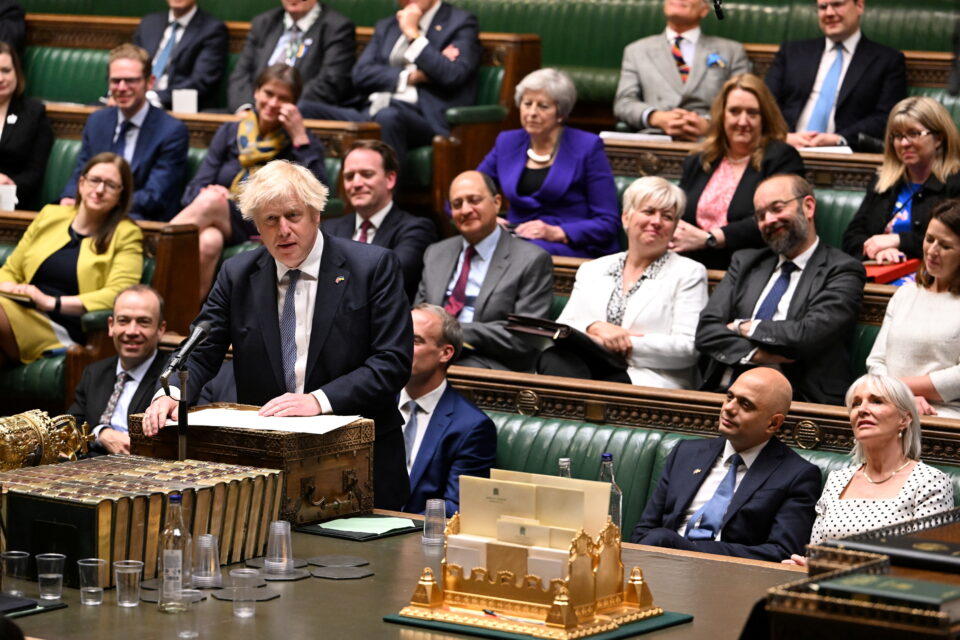 Prime Minister Boris Johnson will face a confidence vote on Monday after more than 15% of elected Conservative lawmakers withdrew their support for the British leader following the “partygate” scandal.

Johnson, who helped the Conservatives win a large majority in a 2019 election, has apologised but said he would not resign after a damning official report detailed a series of illegal parties at his Downing Street office during COVID-19 lockdowns.

Below is an explanation of how the challenge to Johnson’s leadership will work under the governing Conservative Party’s rules:

What triggered the leadership challenge?

A leadership challenge is triggered when 15% of Conservative members of parliament (MPs) write letters demanding a confidence vote to the chairman of the party’s “1922 Committee”, which represents party lawmakers who don’t have government jobs.

The Conservatives have 359 MPs, so 54 letters were needed.

What will happen during the confidence vote?

All 359 Conservative MPs can vote, so if Johnson gets 180 votes, it will secure the majority he needs to survive.

There is little formal indication of the extent of the rebellion against Johnson. Not all of those who submitted letters did so publicly, while around two dozen called for him to go or criticised him without confirming they sent a letter.

Senior members of Johnson’s cabinet have expressed their support for him. The Institute for Government estimate that around 160-170 lawmakers hold government roles in some capacity, and would usually be expected to resign if they wished to oppose the government in an issue of importance. While some have already quit government over “partygate”, the confidence vote is run by Conservative lawmakers and the ballot is a secret one.

If Johnson wins, he remains in office and cannot be challenged again for 12 months. If he loses, he must resign and is barred from standing in the leadership election that follows.

What happens if Johnson wins the confidence vote?

Although Johnson would theoretically be safe in his job for a year, that rule could be changed.

Asked whether that timeframe could be shortened, Brady said: “Technically, it’s possible for rules to be changed, but the rule at present is that there will be a period of grace.”

Even if Johnson is protected from a new vote of confidence, a significant mutiny could make his leadership untenable.

Johnson’s predecessor Theresa May won a confidence vote in her leadership in December 2018, by 200 votes to 117, but the pressure on her to quit continued after she failed to deliver Britain‘s departure from the European Union on time and she announced her resignation less than six months later.

What would happen if Johnson loses?

If Johnson loses, there will be a leadership contest and his replacement would become prime minister.

If several candidates come forward, a secret vote is held among Conservative MPs to whittle down the field. The candidate with the fewest votes is removed and another ballot among Conservative lawmakers is held. The process is repeated until two candidates remain, with votes typically held several days apart on Tuesdays and Thursdays.

The final two candidates are then put to a postal ballot of the wider Conservative Party membership, with the winner named the new leader. Voters need to have been party members for more than three months.

British Prime Minister Boris Johnson is facing a confidence vote later today following a series of scandals, including a damning official report about COVID-19 lockdown-breaking parties at his official residence.

Johnson has vowed to fight on as leader, but if he loses the confidence vote he will be out of a job, and a contest to replace him will begin.

The foreign secretary is the darling of the Conservatives’ grassroots and is regularly top of the polls of party members carried out by the website Conservative Home.

Truss has a carefully cultivated public image and was photographed in a tank last year, evoking a famous 1986 image of Britain‘s first female prime minister, Margaret Thatcher, who was also captured in such a pose.

The 46-year-old spent the first two years of Johnson’s premiership as international trade secretary, championing Brexit, and last year was appointed as Britain‘s lead negotiator with the European Union.

Truss said on Monday Johnson has her “100% backing” and she urged colleagues to support him.

The former foreign secretary, 55, finished second to Johnson in the 2019 leadership contest. He would offer a more serious and less controversial style of leadership after the turmoil of Johnson’s premiership.

Over the last two years, Hunt has used his experience as a former health secretary to chair the health select committee and has not been tarnished by having served in the current government.

The finance minister was until last year the favourite to succeed Johnson. Sunak was praised for a rescue package for the economy during the coronavirus pandemic, including a jobs retention programme, which prevented mass unemployment, that could cost as much as 410 billion pounds ($514 billion).

But he has faced criticism for not giving enough cost-of-living support to households, his wealthy wife’s non-domiciled tax status and a fine he received, along with Johnson, for breaking lockdown rules.

His tax-and-spend budget last year put Britain on course for its biggest tax burden since the 1950s, undermining his claims to favour lower taxes.

The current education secretary impressed as vaccines minister when Britain had one of the fastest rollouts of COVID-19 jabs in the world.

Zahawi’s personal story as a former refugee from Iraq who came to Britain as a child sets him apart from other Conservative contenders.

He went on to co-found polling company YouGov before entering parliament in 2010. He said last week at some stage it would be a “privilege” to be prime minister.

The former defence minister was sacked by Johnson when he became prime minister after she backed his rival Hunt during the last leadership contest.

Mordaunt was a passionate supporter of leaving the European Union and made national headlines by taking part in now-defunct reality TV diving show.

Currently a junior trade minister, Mordaunt called the lockdown-breaking parties in government “shameful”. She said last month that voters wanted to see “professionalism and competence” from the government.