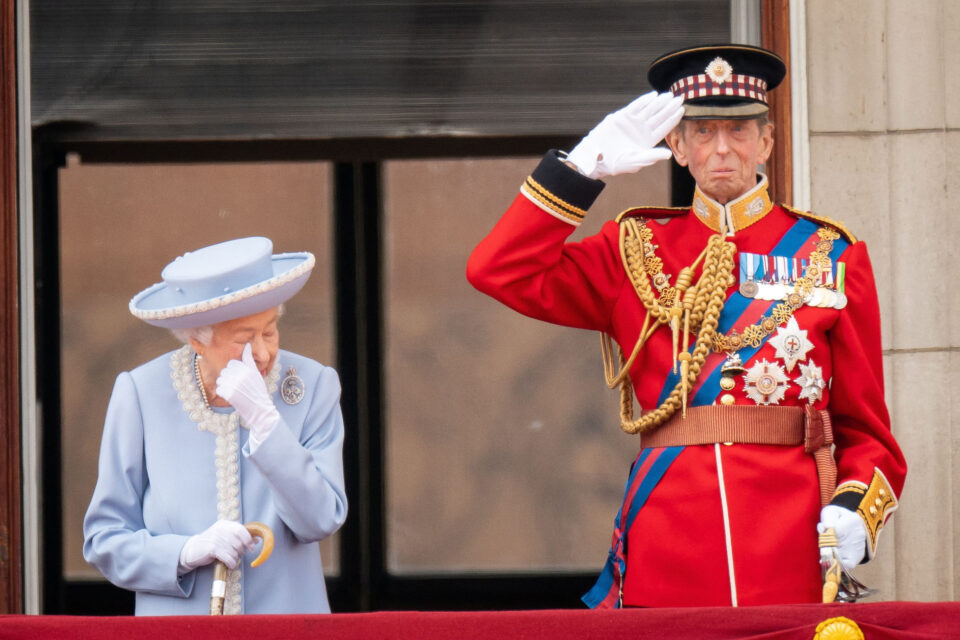 Britain's Queen Elizabeth and the Duke of Kent watch the Trooping the Colour ceremony at Horse Guards Parade from the balcony at Buckingham Palace, as a part of the Queen's Platinum Jubilee celebrations, in London, Britain June 2, 2022. Aaron Chown/Pool via REUTERS

Queen Elizabeth II is the first British monarch to celebrate a platinum jubilee, marking her 70 years on the throne. Like all jubilees since the first celebrating 50 years of King George III’s reign in 1809, this is a national occasion with celebrations arranged in many communities across the United Kingdom.

Modern royal jubilees have become chiefly associated with holidays, processions and parties. But jubilees are also religious events, and their history reveals the monarchy’s widening role in British religion and communal relations.

Religion is very important for the British monarchy. For the royal family, it is a matter of personal belief, expressed in regular Christian worship. Religious commitment – the association with the sacred and with absolute values – reinforces respect for the monarchy and for its promotion of public service, social cohesion and charitable endeavour.

But this commitment is also a constitutional requirement. The monarch is the supreme governor of the Church of England and “defender of the faith”, the faith of the “protestant reformed religion”. The monarchy is historically a Church of England (Anglican) institution, and coronations and national thanksgiving services are held in Anglican churches.

You might expect that identifying with Anglicanism would have caused problems for the modern monarchy, which presents itself as a representative and unifying institution. During the 19th century, other churches resented the Church of England’s privileges. And since the 1960s, Britain has become increasingly religiously diverse, home to many members of different “world faiths”.

Yet just as the Church of England has adapted to new conditions, as we shall see the monarchy has actively extended its religious reach, assisted by its position as the symbolic head of the nation. Other churches and faiths want the association with the monarchy because loyalty to the sovereign and royal recognition validates their own status in national life. A social logic draws them towards the monarchy.

This is strengthened by the evident dutifulness and religious faith of most modern monarchs. Notably, the Queen has expressed this dutifulness in her support for religious and charitable causes. It can also be heard in the increasingly religious character of her annual Christmas broadcasts last few years.

Jubilees and the churches

The monarchy is not just Anglican. By the union of England and Scotland in 1707, sovereigns are committed to upholding the presbyterian Church of Scotland. When in Scotland the royal family has since Queen Victoria’s reign worshipped as Presbyterians. More significantly, from the 1870s other churches joined in national services for jubilees and other royal events.

Best known are the national thanksgiving services in London. For Queen Victoria’s golden and diamond jubilees in 1887 and 1897, representatives of numerous English, Welsh, Scottish and Irish protestant churches accepted invitations to join the congregation. For George V’s silver jubilee in 1935, representatives of these churches were more prominent, joining Anglican clergy in the ecclesiastical procession and receiving prominent seats.

For each jubilee, all churches also organised special local services throughout the UK, including “united services”, bringing together members of different churches. The Roman Catholic Church held its own, because of a prohibition on worship with protestants. But this ban ended in 1964, enabling the Church of England, Free Churches and the Roman Catholic Church to publish a joint service for Queen Elizabeth’s silver jubilee in 1977 for all their local churches.

This inter-denominational spirit was spoilt when, to the annoyance of church leaders, the national thanksgiving attended by the Queen and royal family in 1977 at St Paul’s Cathedral was an entirely Anglican service. But the archbishop of Canterbury at the time, Donald Coggan, insisted that this must never be repeated.

In subsequent national services for royal occasions – including the golden and diamond jubilees of 2002 and 2012 – clergy of the Free Churches, Catholic Church, and Church of Scotland have had active speaking parts. In this way, royal jubilees have been milestones in the developing cooperation among British churches.

More strikingly still, the Queen as head of the Commonwealth has worked to encourage better relations between its diverse faiths.

In the 1970s – long before Charles, the Prince of Wales, declared that as king he would want to be the “defender of faith” (of both Christians and non-Christians) -– the Queen supported the creation of annual multi-faith Commonwealth services at Westminster Abbey. This was a move that obliged the Church of England to take a positive attitude towards non-Christian faiths.

For the 2002 and 2012 jubilees and for other royal occasions, representatives of world faiths attended the national religious services. In 2002, members of the royal family visited Jewish, Hindu, Muslim, Sikh, Baha’i, Jain, Zoroastrian and Buddhist sites, and hosted a reception for faith representatives.

In 2012 the Queen attended a multi-faith reception of both church and faith leaders at which the archbishop of Canterbury declared that a leading purpose of the monarchy was to “support the diversity of faith communities” and the Queen that the Church of England had a duty “to protect the free practice of all faiths in this country”.

This transformation in the religious standing of the monarchy contributes to good communal relations. It also has implications for the next coronation.

Some believe that in modern multi-cultural Britain the coronation will have to be changed, with removal of its traditional Anglican ritual and perhaps even much of its Christian character.

The next coronation will certainly be different to the last one, but the readiness of other churches and other faith leaders to participate in royal services led by Anglican clergy in Anglican places of worship suggests that the change may not be as radical as some have supposed.