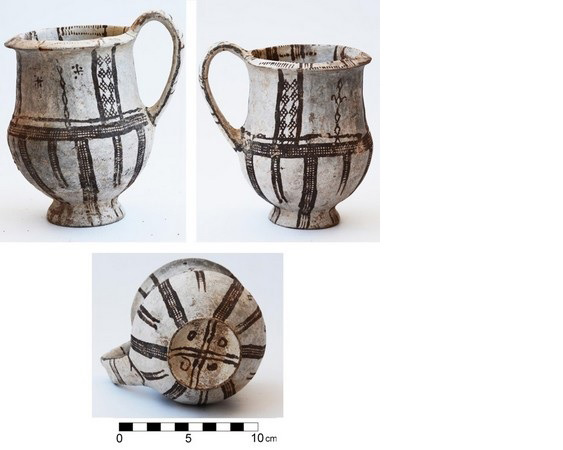 Swedish archaeologists in cooperation with the antiquities department have excavated two burial tombs at the site of Dromolaxia-Vyzakia that they believe belonged to two rich families judging by the nature of the finds, they said on Friday.

This large Late Bronze Age city, which flourished between 1630 and 1150 BC, is situated along the shores of the Larnaca Salt Lake near the mosque of Hala Sultan Tekke.

Both tombs contained material from the outgoing 15th and the 14th centuries BC, which chronologically corresponds to the Late Cypriot IIA-B period, the Late Helladic IIIA1-2 and the famous Egyptian 18th Dynasty. One of the tombs was partly affected by farming activities. The tombs were fenced off in 2017 for excavation, which is now completed.

They were both family tombs with numerous interred individuals, and had been cut into clay-rich soil. The study of the skeletal remains is not yet finalised. Therefore, the estimation of the number of individuals, their gender and age at death have to await further investigations.

“New-born, infants and young and ‘old’ adults were found associated with numerous burial gifts,” an announcement from the antiquities department said, adding that ‘old’ should be understood in the context of the fact that individuals at the time rarely lived beyond 40. “The average lifespan was quite low in this period,” it added.

Dominating among tomb gifts was pottery, mainly ceramic vessels of high quality which were produced on Cyprus but also numerous imports.

The most common imports arrived from the Aegean, the Mycenaean and Minoan cultural spheres, the department said. There are also imports from Anatolia, the Levant and Egypt. “From the latter arrived exquisite vessels of alabaster and scarabs,” it added.

“It is worthwhile noticing, that one of the alabaster vessels of Egyptian origin imitates Cypriot pottery, the so-called Base-ring I ware, which became very popular in Egypt during the reign of pharaoh Thutmosis III in the 15th century BC.”

Some of the scarabs have inscription with hieroglyphs, which will be deciphered, the announcement said.

There are also several objects of ivory which immediately were submitted to the conservators of the department of antiquities, in order to preserve and conserve the extremely brittle material.

“The nature of the finds points to a wealthy Cypriot society which had established contacts with cultures all over the Mediterranean and beyond,” the announcement said.

“The wealth of the inhabitants of Dromolaxia-Vyzakia was based on the production and export of copper, and far-reaching trade. This is substantiated by tons of copper slag and ore which was refined in intra-urban workshops.”

The excavations at the harbour city were carried out in May and June this year by a team headed by Professor Peter Fischer from the University of Gothenburg, Sweden. Parallel with these excavations, another group of the Swedish team, supervised by Dr Teresa Bürge processed the finds from previous excavations kept at the storerooms of the archaeological museum in Larnaca.

The Swedish team was assisted by Professors Kirsi Lorentz and Sorin Hermon and PhD students from the Cyprus Institute. The teams of the Cyprus Institute provided expertise for the excavation and recording of the human remains, and 2D and 3D presentations of objects and find contexts in addition to material analyses.

Zidane to be named PSG coach next season