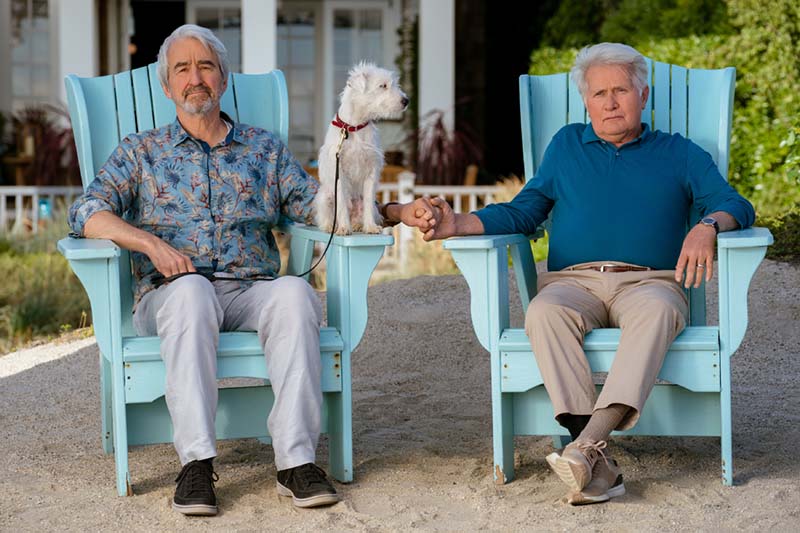 June is International Pride Month, a time when members of the LGBTQ community celebrate who they are, and corporations dye their logos rainbow colours in a shameful attempt to distract us from how awful they are the rest of the year. Here are some LGBTQ-friendly Netflix shows to watch in honour of Pride Month.

When we think of LGBTQ-friendly series, we usually think of young people, discovering themselves for the first time or slightly older people who decide to stop living a lie. However, something we do not see very often are senior gay couples.

In this emotional comedy series, Grace (Jane Fonda) and Frankie (Lilly Tomlin) play the spouses of two prominent divorce lawyers, Sol (Sam Waterston) and Robert (Martin Sheen), who have been secretly dating for 20 years and now want to marry. As the two women must now start their lives over, hilarity erupts as they discover in each other an “emotional support witch.”

Created by Friends co-creator Marta Kauffman, Grace and Frankie premiered in 2015 and lasted for 7 seasons, the longest-running Netflix production to date. The real-life friendship of Tomlin and Fonda is evident in every scene they have together, as their chemistry is incredible. Without ever being trite or syrupy, the series covers not only LGBTQ concerns, but also feminist and age-related ones.

An excellent watch if you are looking for some sit-comedy fun.

Sense8 tells the story of 8 people from all over the world, with nothing in common except their birthday, suddenly realising that they can communicate telepathically, share knowledge and experiences, and even take over each other’s bodies. As they struggle to come to terms with what is happening to them, they find themselves hunted by a shadowy global organisation whose single goal is to wipe out people like them from the world.

Sense8 is written and directed by the Wachowskis, the sister duo behind the Matrix series. This was an extremely personal project for them, as it was created at a time when they were both transitioning to trans women. Sense8 explores a multitude of issues relating to the LGBTQ community, such as hiding your sexuality out of fear of reprisals at work, being accepted by family, finding love, and accepting yourself for who you are. All this, in a backdrop of a sci-fi action series.

If you’re looking for “fabulous,” you have come to the right place! Ru Paul’s Drag Race is a multi-award-winning reality/contestant show in which competitors aim to become the next big name in the drag world. And everyone who has ever attended a drag show knows how much fun it is!

You cannot help but laugh and enjoy yourself when there is singing, dancing, and extravagant costumes and make-up. Ru Paul’s Drag Race is the show for you if you enjoy reality shows and want to watch something LGBTQ-friendly.

If you enjoy reality shows, particularly makeover shows, and believe Ru Paul is a little too much for you, I have got a solution for you. Queer Eye is a show where five queer people, known collectively as the “Fab Five,” give a makeover to a person known as the “hero of the week.” The subject is rarely queer; rather, it is a person who wishes to improve their situation by altering their lifestyle. The “Fab Five” offer grooming, fashion, lifestyle, and food advice in an attempt to help the individual become a better version of themselves. Queer Eye is an enjoyable show, full of understanding, acceptance, and positive energy.

Man jailed after found driving six times over the limit