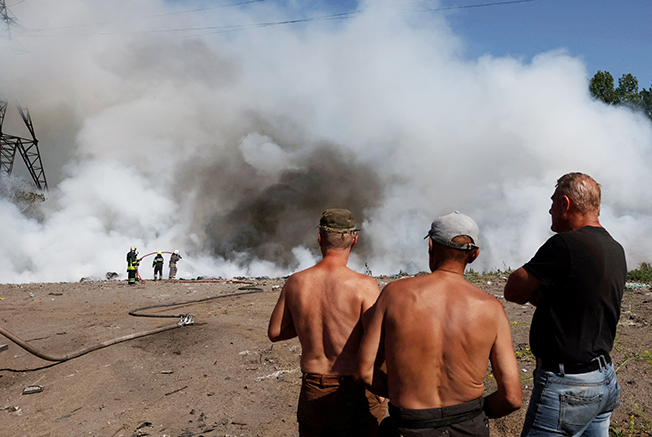 Onlookers watch as firefighters attempt to put out a fire allegedly caused by a shelling in the Nemyshlianski district, as Russia’s attack on Ukraine continues, in Kharkiv region

European leaders will formally set Ukraine on the long road to EU membership at a summit in Brussels on Thursday. Though mainly symbolic, the move will help lift national morale at a very difficult time in a four-month conflict that has killed thousands, displaced millions and flattened towns and cities.

The war has also had a massive impact on the global economy and European security arrangements, driving up gas, oil and food prices, pushing the EU to reduce its heavy reliance on Russian energy and prompting Finland and Sweden to seek NATO membership.

The EU will temporarily shift back to coal to cope with dwindling Russian gas flows without derailing longer term climate goals, an EU official said on Wednesday, as a tight gas market and soaring prices set off a race for alternative fuels.

“I do believe that all 27 European Union countries will support our candidate status,” Zelenskiy told students in Toronto via videolink.

“This is like going into the light from the darkness.”

Diplomats say it will take Ukraine a decade or more to meet the criteria for joining the EU. But EU leaders say Ukrainians are fighting for European values of democracy and that the bloc must make a gesture that recognises their sacrifice.

For now, however, with its forces running low on ammunition as a fierce war of attrition grinds on in the Donbas, Ukraine has more urgent priorities than attempting to meet EU standards on tackling corruption or reforming public administration.

The Russian strikes on Tuesday and Wednesday on Kharkiv, near the Russian border, were the worst for weeks in an area where normal life had been returning since Ukraine pushed Moscow’s forces back in a major counter-offensive last month.

Kyiv characterised the strikes, which killed at least 20 people, as a bid to force Ukraine to pull resources from the main battlefields in the Donbas to protect civilians.

“It was shelling by Russian troops. It was probably multiple rocket launchers. And it’s the missile impact,” Kharkiv prosecutor Mikhailo Martosh told Reuters amid the ruins of cottages struck on Tuesday in a rural area on the city’s outskirts.

Medical workers carried the body of an elderly woman from a burnt-out garage to a nearby van.

“She was 85 years old. A child of the war (World War Two). She survived one war, but didn’t make it through this one,” said her grandson Mykyta.

Ukrainian presidential adviser Oleksiy Arestovych said in a video address that Russian forces were hitting Kharkiv “with the aim of terrorising the population”.

“The idea is to create one big problem to distract us and force us to divert troops. I think there will be an escalation,” Arestovych said.

Zelenskiy has also warned the fighting may escalate ahead of the EU summit. Russia has long opposed closer links between Ukraine and Western clubs such as the EU and especially NATO.

In an evening military update, Ukraine’s General Staff catalogued continued heavy Russian shelling of Kharkiv and other towns and villages in its vicinity and air strikes on the devastated city of Sievierodonetsk, among others.

Moscow says Ukrainian forces in Sievierodonetsk, scene of the heaviest recent fighting, are trapped. It ordered them last week to surrender or die after the last bridge over the Siverskyi Donets river was destroyed.

But Oleksandr Ratushniak, a freelance photographer who reached Sievierodonetsk with Ukrainian forces in recent days, filmed reinforcements crossing in an inflatable raft.

Inside Russia, a fire tore through an oil refinery just 8 km (5 miles) from the frontier with Donbas territory controlled by pro-Russian separatists, after what the refinery described as a cross-border attack on Wednesday by two drones.

There was no immediate Ukrainian comment on the strike, which suspended production at the Novoshakhtinsk refinery.

Ukraine generally does not comment on reports of attacks on Russian infrastructure near the border, which in the past it has called “karma” for Russian attacks on Ukraine.

In southern Ukraine, officials said seven Russian missiles had struck the port of Mykolaiv, killing at least one person and causing several major fires. Global grain trader Viterra said its terminal in Mykolaiv had been hit and was ablaze.

Britain’s defence intelligence service believes Russia’s momentum in the war could slow in the next few months as its army exhausts its resources, Prime Minister Boris Johnson told a group of European newspapers, adding that Western countries should be ready to support any Ukrainian counter-offensive.

Wednesday was the “Day of Remembrance and Sorrow” in Russia and Ukraine, commemorating the day Hitler’s Germany attacked the Soviet Union. Russian President Vladimir Putin laid flowers at a memorial flame for the dead.

World War Two, which killed 27 million Soviet citizens, plays a prominent role in Russian commentary on the Ukraine invasion, which Putin calls a “special operation” to root out “Nazis”. Kyiv and the West call that a baseless justification for a war to wipe out Ukraine’s identity as a separate nation.

“Psychiatrists of the future will examine: how after building the WWII cult for years, Russia began to recreate the bloody pages of history and the Nazis’ every step,” Ukrainian presidential adviser Mykhailo Podolyak tweeted.

In his comments to the Canadian students, Zelenskiy compared Ukraine to the fictional boy wizard Harry Potter and Russia to Harry’s arch-enemy Lord Voldemort, who finally gets defeated.

“Harry Potter is better than Voldemort, and we know who is Voldemort in this war, and who is Harry Potter, so we know how the war will end,” Zelenskiy grinned.