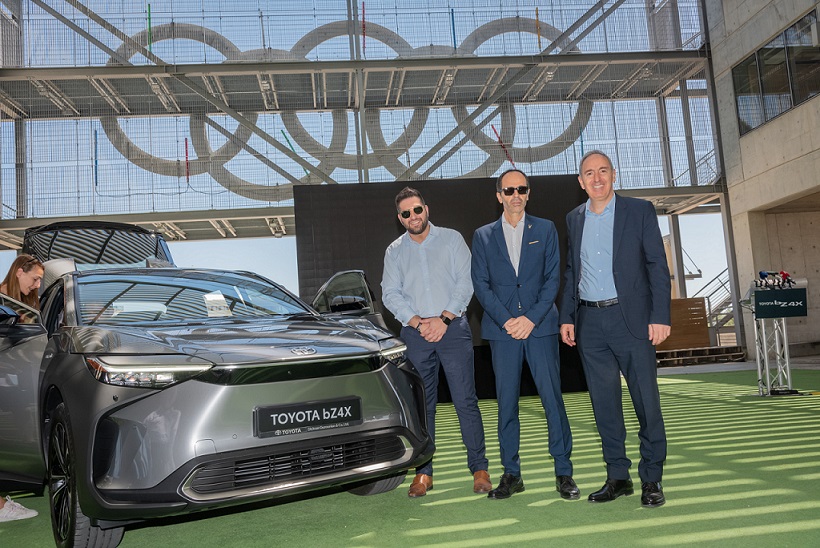 Toyota Cyprus chose Nicosia’s Olympic Hall to unveil the new Toyota bZ4X, the marque’s first fully electric vehicle, confirming its leadership in the field of electrification. In attendance at the June 29 launch event were media representatives, as well as customers who had already pre-ordered the automobile.

In his address, Toyota Cyprus President and CEO Dickran Ouzounian gave a historical review of Toyota’s evolution, from the production of its first electric battery, to the first electric models, to the present, shaped by the arrival of the Toyota bZ4X.

“I won’t go so far back to 1996, when we first introduced the Prius – the world’s first hybrid car for sale, although it will never cease to amaze me how ahead of the curve Toyota was for its time,” he observed, choosing instead to: “go back in time almost two years, when in November 2020, Toyota announced the infamous ‘Beyond Zero’ … to go beyond zero emissions”.

“A journey that began with the Prius with Hybrid Electric technology, and today we have hydrogen technology vehicles,” he continued.

“We have already applied the power of hydrogen to saloon cars, buses, trucks and boats that ’emit’ only water. Today, we are moving from zero emissions to zero restrictions, offering a better society.

“Why stop at zero when we can go beyond zero?”

In his own address, Cyprus Olympic Committee (COC) President George Chrysostomou referred to the common values shared by COC and Toyota, based on the principles of the Olympic spirit, and the ceaseless evolution towards a better world, driven by fair play, vision and belief in the goal.

Toyota is one of the Global Partners of the International Olympic and Paralympic Committee, pointed out Chrysostomou, and, with its upcoming actions, the marque aspires to strengthening the leading sporting institution of the Olympic Games.

Furthermore, said the sports chief, COC and Toyota Cyprus have been strategic partners since 2017 – a relationship that has evolved into a meaningful friendship.

In closing, Chrysostomou extended his best wishes to Toyota’s efforts for even greater technological innovations and upgrades, which will bring humanity closer, for a more favourable future for all.

Thereafter, Toyota Cyprus Marketing & CX Manager Loucas Leonidou, took the podium, expressing his thanks to COC President Chrysostomou and the Committee for their kind hospitality at the venue.

In his own presentation, Leonidou said the new Toyota bZ4X had arrived to electrify the company’s showrooms and launch a new page in Cyprus’ automotive history. He then pointed out that the new bZ4X was structured around three key elements, amply familiar to Toyota as a manufacturer: the SUV, electrification and technology.

The Marketing & CX Manager next went over all the unique features of the new Toyota bZ4X, as well as its design philosophy, focused on meeting the multi-faceted demands of electrification, alongside our modern lifestyles, and the demand for constant mobility, action and adventure.

The new Toyota bZ4X fully responds to the future needs of a zero-emission world, as well as consumers’ desire for an enhanced and dynamic driving experience, with an electric vehicle exuding excellence, intelligence, reliability, performance and safety. The model is uniquely easy to use, all-weather and ideal for any new travel adventure.

Thanks to Toyota’s progress and innovation in battery performance research, the bZ4X’s battery offers solid reliability and range, perfectly adapting to all weather conditions. Toyota’s emphasis and insistence on quality provides the guarantee and confidence when it comes to dependability, as, even after 10 years of use, the battery is expected to operate at 70 per cent of its original performance.

Meanwhile, specifically for the battery, Toyota through its EV Health check gives a 10-year or 1,000,000-km warranty, whichever expires first. The safety features of the bZ4X also include the latest Toyota Safety Sense technology, Emergency Stop Assist (DESA) and Over the Air Updates (OTA), guaranteeing assurance in urban and off-road driving.

The response from the driving public towards the new Toyota bZ4X has been strong, and early orders have shown that demand for the bZ4X will remain high.