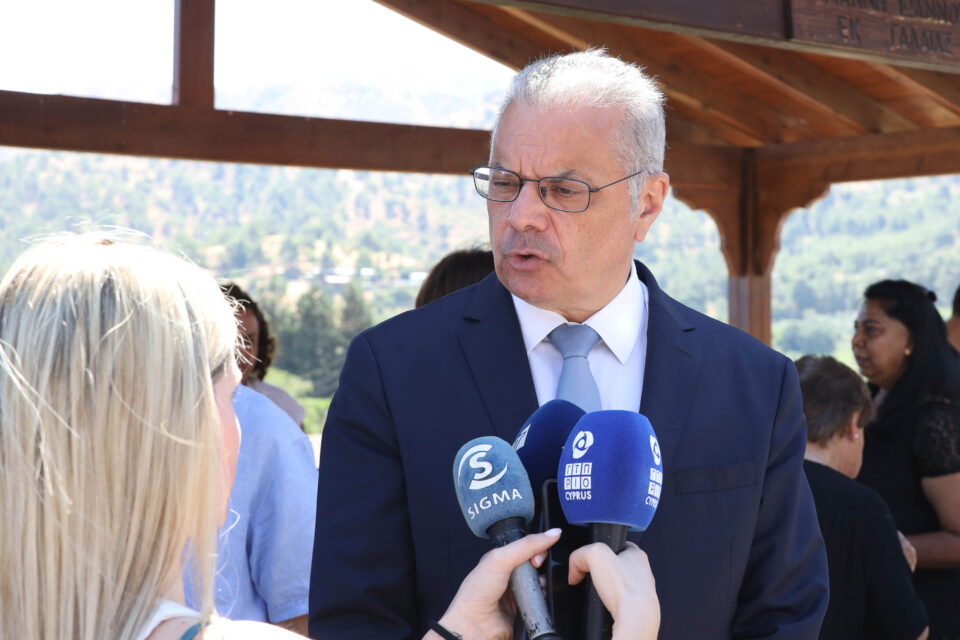 The government is intensifying its efforts to curb illegal crossings through the buffer zone, Interior Minister Nicos Nouris said on Sunday.

“For those who do not care, we refer to the escalating reactions of all the European countries, which one after the other, are realising the need to limit the migratory flood and intensify measures,” the minister said.
“How much more” then must Cyprus react in a “semi-occupied homeland”, he added during an even in Ayios Ioannis Pitsilia.

Turkey, he said, in addition to the systematic policy of “colonisation of the occupied part of Cyprus”, in recent years has also indulged in an “alternative type of colonisation” of the government-controlled areas through the illegal channelling of irregular immigrants, “who by the thousands are pushed towards the Green Line”.

He said the purpose was clear – to cause economic, social and political problems in the Greek Cypriot community.

While the Greek Cypriot side, he said, firmly sticks to its efforts to build a peaceful future, which will be based on the principles of respect for democracy and human rights, “the clouds of Turkish provocative behaviour and rhetorical tension are getting thicker”.

“Turkey and unfortunately also the Turkish Cypriot side, deliberately choose to trample on the prospects of the solution and reunification of the country, deviating from the relevant Security Council Resolutions, but also the principles and values ​​of the European Union,” said Nouris.

Referring to the EU issuing a warning to Greece last week that it needed to stop the “violent” deportations of migrants or risk losing funds, Nouris said that in 2020 illegal flows from Turkey to Greece had risen to 78,000, while in 2021 Greece was able to limit flows to 4,100.

“I would be happy if we could record similar results in the Republic of Cyprus,” he said. “Before the EU points fingers or makes suggestions to a front-line member state facing a problem of this magnitude, it would be good first, in the same indicative way, to address the originator of the problem, which is Turkey,” he added

After becoming one of the main destination points during the migration crisis of 2015, Athens has hardened its policy in the past year by increasing land and sea patrols, extending a border fence and building camps with much stricter security on its islands near Turkey.

It has repeatedly denied accusations of so-called pushbacks of asylum-seekers, saying it intercepts boats at sea to protect its own and the European Union’s borders.

She said Athens would put in place from September a new system to safeguard fundamental rights. She gave no details about the new system.

“Funding is linked to EU fundamental rights being correctly applied,” she added.

Greece said last month it would not allow the illegal entry of migrants by land or by sea, after an increase in attempted entries through its Aegean islands and land border with Turkey.

Around 47,000 people arrived by sea to Italy, Greece, Spain, Cyprus and Malta so far this year, the UN refugee agency UNHCR said. The Mediterranean countries expect over 150,000 arrivals this year as food shortages caused by the Ukraine conflict threaten increased arrivals from Africa and the Middle East.

Asked if he thinks that Cyprus could listen to the same advice from Mrs. Johansson, Nouris said: “We are doing what is humanly possible and we can’t do much more and I want to believe that the EU will be our helper and supporter. No one ever said that we should treat these people in a wrong way. The Republic of Cyprus does not do it, it did not do it and I am categorical on this despite the comments to the contrary that are heard by some.”