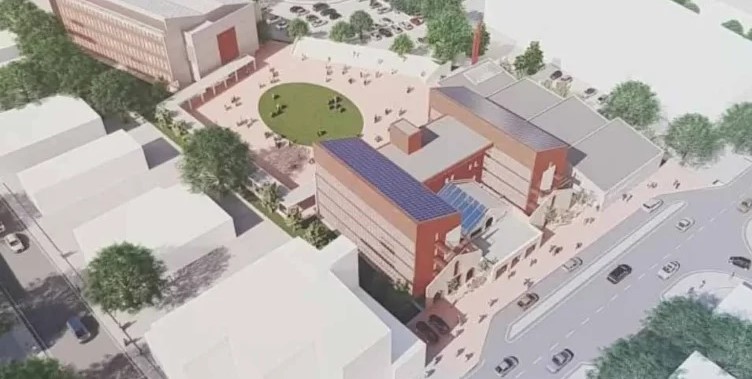 Artist's impression of the campus

The urban planning permit for the construction of the American University of Beirut (AUB) in Paphos has been issued, Mayor Phedonas Phedonos has said.

The agreement between the municipality of Paphos and Lebanon’s AUB for the establishment of the American University of Beirut-Mediterraneo in Cyprus was signed on April 8, 2022.

“There are few universities around the world that have the tradition, history and influence that this particular university has,” he said, adding that despite the difficulties it faces AUB remains among the top 220 universities of the world.

The AUB has invested €29 million in the Paphos Project and construction is due to get underway this year, possibly as soon as this month and be completed within 12 months, in time to welcome students by September 2023.

Architectural plans for the university show that it will operate out of the complex of the old Carob Mills on Apostols Pavlos Avenue and cover 10,000 square metres. A government owned plot of land of around 7,000 square metres has been donated.

The American University of Beirut-Mediterraneo will operate according to American standards. In the first phase, three fields of study will be covered: computer science, economics and business and civil engineering, with the aim of accommodating over 2,000 students in the coming years.

Paphos in particular was chosen as it offers a vibrant cultural, historical and architectural environment for an academic institution, according to the university.

More generally, the choice of Cyprus as a location was helped by the already strong links with an active AUB alumni chapter on the island with over 300 living here.

There will be extensive interaction between the Paphos and Beirut campuses such as student exchanges, faculty exchanges, collaborative research projects, expanded online and hybrid learning opportunities.

The Paphos project comes under the AUB’s general expansion strategy. The aim is to make AUB a global American university anchored in Beirut, with offices in North America, hubs in Africa, an expanded AUB online presence, and plans to establish a campus in the Gulf.

The American University of Beirut was founded in 1866 and bases its educational philosophy, standards, and practices on the American liberal arts model of higher education.

As a teaching-centred research university, AUB has around 800 instructional faculty and a student body of around 8,000 students. It currently offers more than 130 undergraduate and post-graduate programmes.