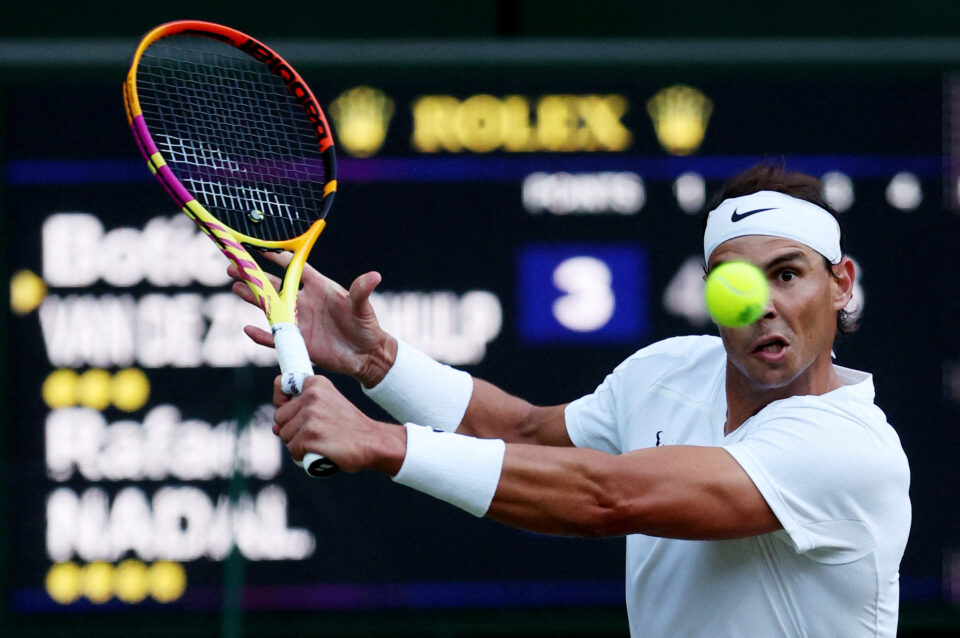 Second seed Rafael Nadal took another step forward in his bid for a rare calendar-year Grand Slam on Monday by booking his spot in the Wimbledon quarter-finals with a commanding 6-4 6-2 7-6(6) win against Dutchman Botic van de Zandschulp.

The All England Club, where the Spaniard has won two of his 22 majors, has been the least rewarding place for Nadal but he arrived this year having won the Australian and French Open titles back-to-back for the first time in his career.

A third Wimbledon title and first since 2010 on the manicured lawns and a U.S. Open triumph would see the Mallorcan claim the calendar slam — a feat last achieved in 1969 by Australian great Rod Laver.

He will face American 11th seed Taylor Fritz for a place in Friday’s semi-finals.

“To be in the quarter-finals here at Wimbledon after three years without playing here, it’s amazing for me,” said Nadal. “So very, very happy.

“It has been a good match in general terms against a difficult player. I think a very good player.”

Nadal played and won at Roland Garros with pain-killing injections prior to each match and only confirmed his participation at the All England Club after radio frequency treatment eased pain in his foot.

Playing his first tournament on grass since his 2019 semi-final loss at Wimbledon to Roger Federer, the Spaniard has shown little difficulty adjusting to the surface.

“I did I think (make) a big effort to be here,” he said. “(It) takes a lot of mental and physical effort to try to play this tournament after the things that I went through the last couple of months.

“But as everybody knows, Wimbledon is a tournament that I like so much. Have been three years without playing here. I really wanted to be back. That’s what I am doing. So that’s why it means a lot for me to be in the quarter-finals.”

He felt his overall game was improving “day-by-day”.

“It’s always the same here. It’s not about how close I am to the level or not. I don’t know that. I can’t predict what’s going to happen,” Nadal said.

“But the positive thing is the first two matches haven’t been good. Then two days ago I played I think at a high level for the first time. And today most of the match, again, at a very positive level.”

He dominated proceedings from start to finish in his fourth round outing with a little wobble at the end.

Nadal came into Monday’s clash having won the pair’s only previous meeting in the third round of this year’s Roland Garros in straight sets on his way to a 14th French Open title.

Facing Van de Zandschulp a day after top seed and reigning champion Novak Djokovic beat another Dutchman in Tim van Rijthoven, Nadal had two break point chances in his opponent’s first service game but could not make them count.

With the Dutchman serving to stay in the opening set at 4-5, Nadal forced an error from the 26-year-old’s backhand with a vicious angled forehand for the crucial break.

After saving the first break point on his serve in the opening game of the second set, Nadal breached Van de Zandschulp’s delivery in the next to take the lead early with two consecutive errors from the Dutchman.

A double fault in the eighth game from Van de Zandschulp gifted Nadal a double break and with it the second set.

A wild forehand saw Nadal suffer his first break at the start of the third. But the joy for the Dutchman and the crowd’s hopes of an extended contest were short-lived as the left-hander immediately broke back.

An incredible backhand pass on the stretch brought up a break of serve for Nadal in the sixth game and the delighted Spaniard celebrated with a number of fist pumps.

Serving for the match at 5-3 the 36-year-old was broken again as Van de Zandschulp forced a tiebreak.

But Nadal found the edge, earning a crucial mini break by winning a 30-shot rally — the longest in the match — that got the crowd on their feet.

Halep was expected to be tested by Spanish fourth seed Paula Badosa but the Romanian needed just an hour to win 6-1 6-2 as the 16th seed looks to reclaim her crown at the All England Club after her triumph in 2019.

Halep will play 20th-seeded American Amanda Anisimova who celebrated the Fourth of July — U.S. Independence Day — with a 6-2 6-3 win over Harmony Tan, ending the dream run of the Frenchwoman who eliminated Serena Williams in the first round.

Kyrgios has stunned the field to reach the quarter-finals for the first time since 2014 but the Australian was made to work for his 4-6 6-4 7-6(2) 3-6 6-2 victory over American Brandon Nakashima.

Although Kyrgios called for the physio to treat his shoulder midway through the contest, he still managed to fire 79 winners to advance. He is the only Australian left in the men’s draw after Alex de Minaur and Jason Kubler were knocked out.

But Australia will also have a women’s quarter-finalist after Ajla Tomljanovic beat Frenchwoman Alize Cornet in three sets and she will play big-serving Kazakh 17th seed Elena Rybakina who beat Croat Petra Martic.