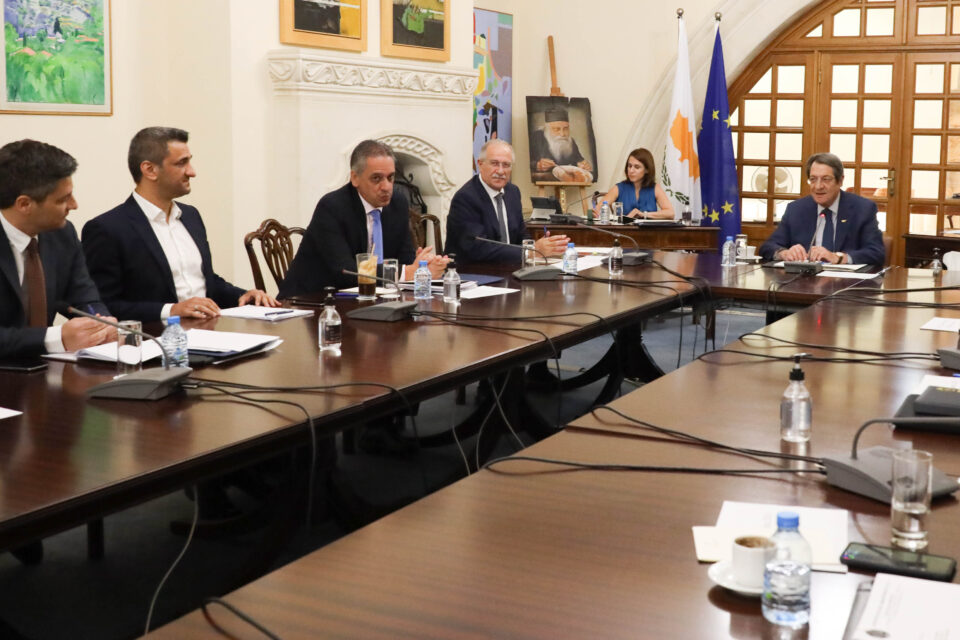 The meeting at the presidential palace on Tuesday

A minimum wage will be introduced “in the coming months”, the government said on Tuesday, after a meeting with President Nicos Anastasiades and relevant stakeholders ended in disagreement.

Despite the differences between the employers’ organisations and trade unions regarding the establishment of a minimum wage, these can be bridged, and discussions can be completed if both sides show goodwill, government spokesman Marios Pelekanos said after the meeting.

He added the introduction of a national minimum wage is expected in the next months.

Discussion of the issue was referred to future meetings with new Labour Minister Kyriacos Koushos as no conclusion was reached during Tuesday’s meeting, chaired by Anastasiades.

“We should expect the completion of the dialogue under the minister of labour and social insurance in the coming weeks, and immediately afterwards we can proceed with any decisions as a government,” Pelekanos said.

“In any case, the president assured that the government’s decision is to establish a national minimum wage soon,” he added.

According to the Cyprus News Agency, trade unions Sek, Peo and Deok criticised employers’ organisations Keve and Oev for differentiating from the framework as had been established during discussions with the late Labour Minister Zeta Emilianidou.

Opinions also clashed on whether the determination of a national median wage will be based on the calculations of the statistical service, which are lower than the EU-SILC cross-sectional and longitudinal sample survey, Keve president Christodoulos Angastiniotis said.

He added that the president clarified the minimum wage will be based on the statistical service’s calculations, which set the median wage at €1,573 with the percentage ranging from 50 to 60 per cent of the median wage.

Discussions so far were based on EU-SLIC calculations, which is nine per cent higher, at €1,727.

It was agreed that discussion will be completed by August the latest, Keve’s president added.

Oev general director Michalis Antoniou said an effort is needed to find consensual solutions, since there are elements of concern from both the labour and employers’ groups.

He said discussions were not near conclusion as the two sides had never shared their opinions and proposals. This was scheduled for May 16, when the late labour minister was hospitalised in Athens, he explained.

But Peo general secretary Soteroula Charalambous said the dialogue has been going on for a long time and the “broad outlines” had been set. The aim, she said, is to offer decent employment conditions to workers who so far do not have regulated employment.

Peo, she added, will not accept a minimum wage that “perpetuates poverty wages… that are below the poverty line”.

Echoing her statements, Deok union head Iosif Anastasiou said “what we expected today was the conclusion of the discussion so that a decent general minimum wage would soon be announced”.

Instead, Anastasiou said, employers’ organisations put forward issues which “essentially overturn the whole debate that had been held up to now and the basic assumptions that had been made.

“Workers cannot understand positions today that effectively lead to a minimum wage that is lower even than the 2012 minimum wage.”

General secretary of Sek Andreas Matsas said “it is clear that there is a differentiation or an intention to differentiate from the framework that was created.”

Discussions for the introduction of a minimum wage were postponed due to the passing of the labour minister, who suffered a cerebral aneurysm in May, the month during which final decision were expected.

Customs department says it does not carry out random halloumi checks