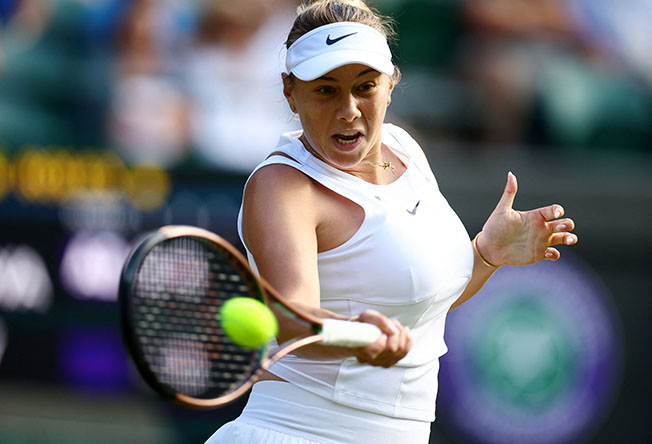 Amanda Anisimova has reached only the second Grand Slam quarter-final of her career but this time the journey has been far more fulfilling for the American following a tumultuous year in which she constantly endured “freak stuff”.

When Anisimova made the French Open semi-finals in 2019 as a teenager she was billed as a rising star but tragedy struck that year when her father and coach Konstantin Anisimova died of a heart attack.

Her game suffered and she tumbled down the rankings but the 20-year-old has soldiered on as she looks to get her career back on track, saying she was motivated to train harder knowing it will pay off despite the other hardships she has encountered.

“There have been a lot of things, especially how last year started with COVID, injury coming into Dubai, falling down the stairs, freak stuff constantly happening,” said Anisimova, who next plays 2019 champion Simona Halep.

“Just knowing what it feels like to get to the semi-final of a Grand Slam and knowing how much it means to me, that’s what kept me going and practising every single day.

“I never really took a break or stopped. I kept pushing myself even though it was constant dissatisfaction, losing constantly at tournaments … I think I progressed last year quite a bit, then it really started showing this year.”

Halep, seeded 16th, is on a crusade of her own as she seeks to reclaim her Wimbledon title after losing the opportunity to defend her crown last year due to a calf injury.

A former world number one, Halep nearly fell out of the top 20 after a rough spell last year but she has been quietly impressive on grass under new coach Patrick Mouratoglou.

“I lost the confidence, the belief that I can be good again, in the top. And I struggled (for) a long period,” Halep said.

“But now it’s past. I’m here, I’m playing well. I’m feeling good on court … I’m sure that I can play good tennis again but it’s going to be a big challenge.”

Anisimova’s compatriot Taylor Fritz has reached his first Grand Slam quarter-final without dropping a set but will face his biggest test when he takes on Calendar Slam-chasing Rafa Nadal — who he beat in the final at Indian Wells in March.

“Indian Wells was kind of crazy with both of us being extremely beaten up before the final. This time … it’s a healthier versions of both of us,” said Fritz, who warmed up for Wimbledon by winning the Eastbourne title.

“But I think the biggest takeaway was I was very aggressive, I was taking my chances and I played the big points really well in that match.”

Nadal played the Indian Wells final with a stress fracture in his rib but the Spaniard, who seems to have also put his chronic foot injury issues behind him, knows what he is up against.

“The week before Wimbledon he (Fritz) won the tournament. Now quarter-finals, winning already in a Masters 1000… He’s in a privileged position,” second seed Nadal said.

“It’s going to be a tough quarter-final against a great player. But at the same time we are in the quarter-finals, so you can’t expect an easy opponent out there.”

Order of play on the main show courts on the 10th day of the Wimbledon championships on Wednesday (play starts at 1230 GMT unless stated, prefix number denotes seeding):