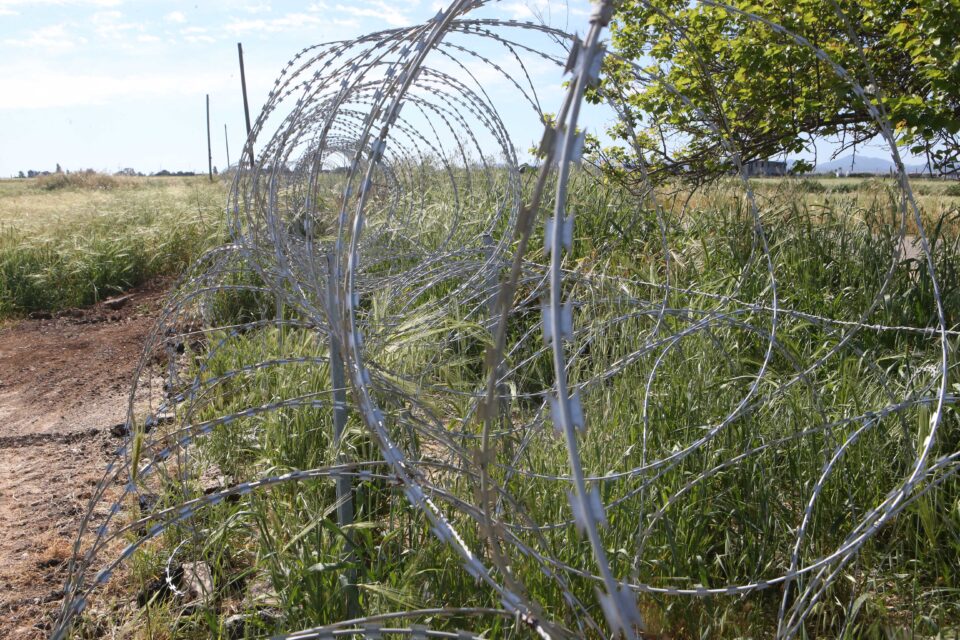 The attorney general must clarify whether he approved measures which will curtail the public’s access to their homes and fields, Akel MP Aristos Damianos said on Thursday after he chaired a House interior committee meeting on the installation of barbed wire along the buffer zone west of Nicosia.

Authorities have erected 11 kilometres of barbed wire along the ceasefire line near Peristerona, Akaki and Astromeritis in an effort to stem the flow of irregular migrants from the north.

Cyprus is struggling to cope with a surge in the number of asylum-seekers – the highest rate per capita in the EU, the overwhelming majority of whom come across the buffer zone. Authorities have appealed to the EU for help and have said their efforts are focused on curbing arrivals, speeding up processing of applications and boosting repatriations of failed asylum bids.

The barbed wire, and the gates being installed to allow controlled access to authorised individuals, have proven divisive.

Community leaders told the committee that they had been informed by the interior ministry that some areas adjoining the buffer zone will be fenced in. Residents and famers would require a code on their mobile phone to gain access.

Irregular migrants who enter territory controlled by the Republic through the buffer zone would be ‘stranded’ within the fenced area, something community leaders said caused concern to residents.

Damianou said that the barbed wire had gone up without the necessary study as the electronic gates could create problems of access to fields and for visitors in urgent cases.

Interior ministry permanent secretary Costas Constantinou said there was a significant increase in the number of irregular migrants with two new channels opening up as from September 2021 — from sub-Saharan countries to Istanbul and then Tymbou, and by sea to the Morphou area from where they cross along blind spots in the ceasefire line.

“The asylum system is on its knees,” he said, with 24,000 pending applications and another 7,300 before the international protection court. In the first six months of 2022, there have been 12,000 arrivals, which was the number for all of 2021. “The vast majority cross through the green line,” he said.

The barbed wire will not solve the problem on its own, but was one of several measures, some of which the public is not aware of, he said.

Community leaders of affected areas asked the safety of residents be safeguarded, citing particular concerns that irregular migrants would be stranded in the buffer zone. Avlona community leader Menelaos Savva said some residents had built two-metre-high walls around their houses because the minister had told them migrants would remain in the buffer zone.

Denia community leader Christakis Panayiotou said the UN, which monitors the buffer zone, should not allow irregular migrants to enter.

And Akaki’s deputy community leader Eleni Yiorgopoulou voiced concern over what would happen in the event of a fire.

Speaking on behalf of the initiative group against the barbed wire, Aphrodite Lougrou said communities were being partitioned, and residents and employees victimised. She said 35 houses and a large number of farmers were affected and questioned what would happen with irregular migrant left within the enclosed area.

Speaking on behalf of the UN high commission for refugees, Olga Komiti said they have not yet been briefed about plans for refugees to remain within the buffer zone. These need to be reviewed to see whether they comply with domestic, European and international laws, she added.

The large increase in asylum applications occurred after the interior ministry’s measures and perhaps this one would not have the desired result, she added.

Edek MP Costis Efstathiou said Cyprus was a victim not of migratory pressure but of a hybrid war, waged through Turkish airlines which carry out flights to sub-Saharan Africa to Istanbul and then Tymbou.

Greens MP Alexandra Attalidou cited a violation of free movement and personal data. She said the asylum system was not operating well and asked the interior ministry why authorities had opted to hire 300 police to patrol to buffer zone and not 100 judges to clear the backlog of applications.

Constantinou replied that the number of judges has risen from two to 10 and there was a proposal for 15, but the Ukrainian crisis has further weighed down on the asylum service which must also manage about 25,000 Ukrainians who have come to Cyprus.

In statements after the meeting, Damianos said that concerns have been heightened given that community leaders, whether supporting or opposing the measure, have cited problems with safety and accessibility to fields, livestock units and homes in the buffer zone.

“No-one disputes that the Republic of Cyprus is called upon to manage flows that surpass its capabilities at all levels and that there must be strong European solidarity, but the specific decisions which concern the fences, wire, electronic gates, the obligation of members of the public to account for when they enter and exit their homes, to secure permission in their own country, not in the occupied areas but those controlled by the Republic raises issues of legality and the constitution,” he said.

The conclusion from the committee meeting, especially as regards natural barriers being placed by the government, is creating enclaved Greek Cypriots which is unacceptable, he said.

Disy MP Nikos Sykas described the migration issue as perhaps the biggest facing the country after the Cyprus problem. The situation was tragic and needed to be addressed, and though the fence would not solve the problem it works preventatively.

Attalides said the system would register visits to homes of people behind the barbed wire and their movement. By leaving the buffer zone in effect behind the wire, we are sending the wrong message, she added.