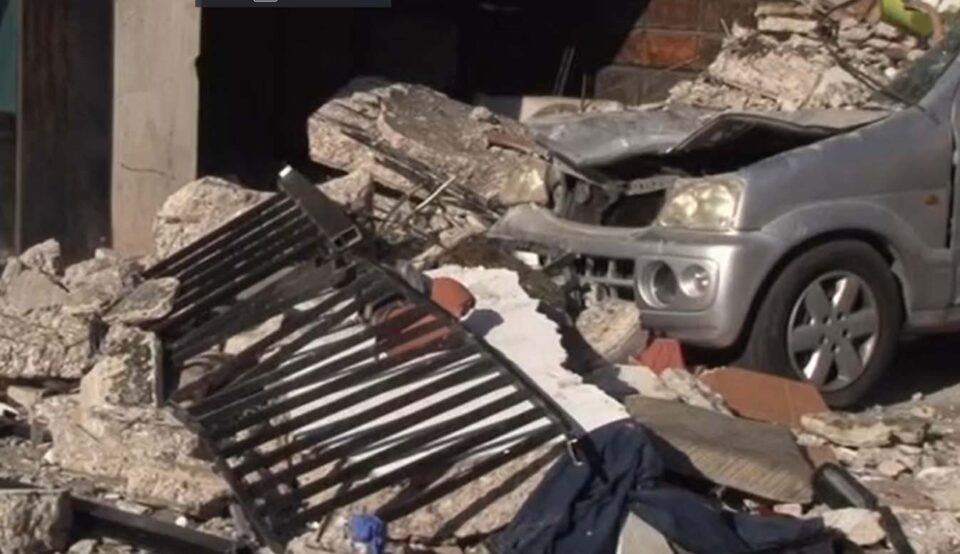 Another balcony collapsed at noon on Saturday in a building on the central Posidon Avenue in Kato Paphos, near the municipal baths, CNA reported.

The  debris fell on the pergola of a restaurant located on the ground floor of the building, resulting in two patrons being slightly injured, the report said.

Several people were sitting in the restaurant at the time. The two injured people were taken by ambulance to  Paphos hospital.

Police and firefighters were at the scene to begin investigations to rule out the possibility of any further injuries under the rubble, and to look into the cause of the new collapse.

The interior ministry in a statement on Saturday evening said it had written a letter to the Paphos municipality following the mayor’s statements on the matter.

The announcement states that it is the local authority’s responsibility to identify, control and take measures in cases of dangerous buildings, based on the roads and buildings law.

The ministry’s letter is asking the municipality what actions it has taken to prevent such things happening and calling on them to act within the bounds of the law.

Paphos Mayor Phedonas Phedonos earlier on Saturday said that the state will not be able to handle the situation in case the municipality and the police decide to evict all tenants living in unsuitable buildings, in the aftermath of a balcony collapse in central Paphos on Friday which left three Nepalese workers seriously injured.

The incident has raised questions on the suitability of the building but also the owner’s renting practices.

The two men aged 27 and 28, and a woman aged 29 were rushed to Paphos general hospital early on Friday morning by ambulance and remain there in in very serious condition.

They crashed through the two balconies below them – which also collapsed – as they appeared to have been sleeping outside, seeking relief from the heat. A parked car below was also destroyed by the debris.

On Friday the mayor blamed the incident on “criminal and greedy” landlords who are exploiting poor migrant workers and asylum seekers, packing them into ‘dens’.

In new statements to Cybc on Saturday, Phedonos said that on Monday, around 300 people will be evicted, pointing out that “judgements will be made when they all end up sleeping on the sidewalks in the Paphos tourist area”.

He also said that all tenants have been notified and the owners have asked the municipality for an extension so they can evict the tenants.

This was confirmed by a tenant of the affected building, who got in touch with the Cyprus Mail late Friday saying that “the police have instructed [the owners] to evacuate the building immediately and indefinitely”.

In his email, the tenant said that the landlord offered no help or alternative accommodation to those being evicted, saying “that it is entirely up to the tenants and that it is not the owners’ decision but that of the police.

“I then called the police to ask for their advice but was met only with rudeness and a suggestion that all the tenants have to solve this problem on their own.  Most of the occupants of this building are immigrants. Many are refugees. Very few have any option of finding alternative accommodation. What kind of heartless people are those Cypriots in authority who would throw these people on the street?” the tenant said.

Also, he said the collapse of the balconies was caused by deterioration of the concrete and steel reinforcement bars used to construct the cantilever balconies but that the main structure of the building remains unaffected.

Saying that the main issue is delays in the enforcement of the legislation, Yiorkadjis suggested that municipalities should be given the power to issue fines for unsuitable structures and inadequate building maintenance.

For his part, Constantinou said that the government must review the process behind the issuance of suitability certificates to make sure they are only awarded by qualified experts.

Police out checking for Covid violations again, none found on first day of mask return

At CIA headquarters, Biden lauds US intelligence for Putin warnings