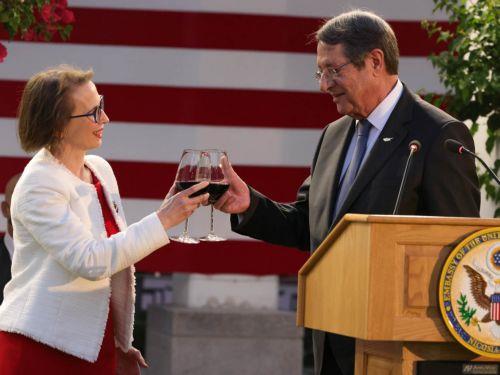 Anastasiades on Tuesday eyed closer cooperation with the US in various fields in an effort to explore new beneficial areas of cooperation. Photo: Stavros Ioannides/PIO

President Nicos Anastasiades on Tuesday eyed closer cooperation with the US in various fields in an effort to explore new beneficial areas of cooperation.

In his address at a reception held by the US ambassador to Cyprus to celebrate the 246th anniversary of US independence, Anastasiades noted that current initiatives are already yielding concrete results for both countries.

“On this day of celebration, I wish to express my sincere appreciation for the excellent and growing partnership we have established these past years between Cyprus and the US and for the shared vision to further enhance it in a tangible manner,” he said.

Cyprus has cooperated with the US on a number of fronts in recent years, including, strengthening bilateral relations to tackle drugs and human trafficking and in the fight against terrorism as well as cyber and maritime security in the region. The US has also invested in a regional security training centre called CYCLOPS, which is based on the island.

Additionally, US energy majors including ExxonMobil, Chevron and Noble Energy have been heavily involved in exploration for hydrocarbons in the island’s Exclusive Economic Zone (EEZ).

The US, Cyprus, Greece and Israel are also involved in the Eastern Mediterranean Security and Energy Partnership Act, to establish an institutional framework for energy and security cooperation, which also includes a partial lifting of a US arms embargo on Cyprus.

The US also acts as an observer in the EastMed Gas Forum set up between Cyprus, Greece and Israel to foster regional predictability and stability.

“The above-mentioned initiatives and developments are already yielding concrete results for both our countries, as well as for key allies in the Eastern Mediterranean and I wish to assure you Ambassador Garber of my government’s and personal determination and commitment to continue working closely with the US administration in order to explore new areas of beneficial cooperation,” Anastasiades said.

To close, Anastasiades reminded the party of the ongoing status-quo in Cyprus as well as his determination to find common ground with the Turkish Cypriot side in efforts for a solution, as he noted how similar it is to the current situation in Ukraine.

“The Declaration’s ideals and values of the right for the people to be able to freely dictate their fate within their nation, without external interventions, not only constitutes a fundamental principle of international relations and of the UN Charter, but becomes even more relevant and necessary following the Russian invasion in Ukraine. An invasion which the international community not only immediately condemned but also demonstrated its unwavering solidarity to the Ukrainian people through political, financial, humanitarian and military support. A war in the heart of Europe which has painful resemblances from Cyprus’ own experience, since Moscow’s excuses of allegedly “trying to protect Russian-speaking citizens of Ukraine” has been used in the same manner as a pretext by Turkey to invade Cyprus in 1974,” Anastasiades emphasised.

“To this end, it is of utmost importance and I refer to my Turkish Cypriot compatriots to remain committed to the continuation of the dialogue, abandon any unacceptable demands and preconditions that do not, in any way or form, serve the interests of the Cypriots, Turkish Cypriots and Greek Cypriots alike,” he concluded.

Bill putting ceiling on prices at the pump heads to plenum