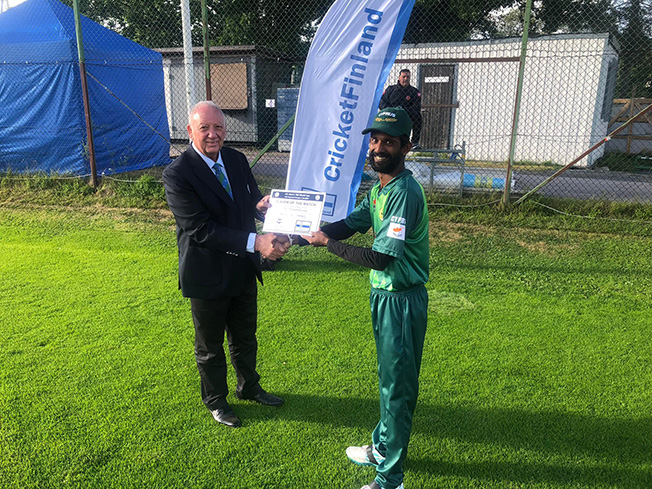 Roman Mazumder hit a rapid 40 to help Cyprus inflict a heavy defeat on Turkey in their first international cricket meeting, in the European Qualifiers for the World T20 Cup played in Finland. The result meant that, despite losing their final group game against Serbia, Cyprus finished second in the group, and will next play against host nation Finland, the second-placed team from the other group, where the winner will take third place in the overall competition standings.

After making a couple of changes to the team to strengthen the batting, Cyprus started steadily against good Turkish bowling at Tikkurila, and passed 50 in the seventh over for the loss of one wicket. Shoaib Ahmad continued his good form with 27, and after a break for rain, Sadun Chamal and Scott Austin kept the score moving with some good running between the wickets.

There was a stumble when Turkey’s spinners took three wickets for one run, but a partnership of 57 between Gurpartap Singh and Roman swung the game Cyprus’ way. Gurpartap did Cyprus proud with an act of good sportsmanship, before being bowled by one that kept low for 36. Roman outscored his captain with 40 from just 18 balls, and the innings ended with Tejwinder Singh hitting 20 in the last over to reach a total of 182-8.

Turkey’s innings was a disaster, as they were bowled out for 48. In the powerplay there were two wickets each for Gurpartap and Shoaib (both caught by Gurpartap), and later a wicket on debut for Muhammad Farooq. But the man of the moment was Sadun who took a hat-trick spread over two overs, and altogether 4 wickets in 5 balls to bring proceedings to a rapid end, with Cyprus winning by a huge margin of 135 runs.

Two days later at the Kerava ground elation turned to disappointment with a 4-wicket defeat to Serbia. The Serbian opening bowlers took control, with two early wickets and few runs conceded. Sadun and Neeraj Tiwari steadied the ship with some good running until Sadun took one risk too many and was run out. Tiwari continued the policy of hard running in company with Austin, but both fell in the tenth over, Tiwari to a brilliant diving catch on the boundary for 25.

Two overs later another quite outstanding catch, running back and diving, accounted for Gurpartap. Meanwhile Roman was having a mixed day, top-scoring with 27 but also being involved in three run-outs, including himself. Iftekar Jaman hit a rapid 22 but was last man out on the first ball of the 20th over, meaning that Cyprus had five balls unused, and were left to defend a score of 125.

Cyprus needed to take early wickets to have a chance of defending this low total, and were helped by good catches by Sadun and Austin, and the game was still in the balance at 50-3. However Serbian opening bat Alex Dizija held the innings together with a crucial half century as the run chase was paced to perfection.

Cyprus missed a few chances in the field, with Ruwan Manawasinha the bowler to suffer most. Austin continued to impact the game with a run out via a direct hit from the deep, and another catch, but Cyprus were just not able to take enough wickets or stem the flow of runs, and Serbia deservedly won the game with 4 balls and 4 wickets to spare, having been a little better than Cyprus in all departments of the game on the day.

The group has been won by Isle of Man, who were clearly the best team and will now face Italy in the first place playoff match. Cyprus finished level on points with Romania and Serbia, but were placed above both because of their better net run rate. They will hope to reproduce their form from the matches against Romania and Turkey, and secure third spot in their play-off match against Finland.