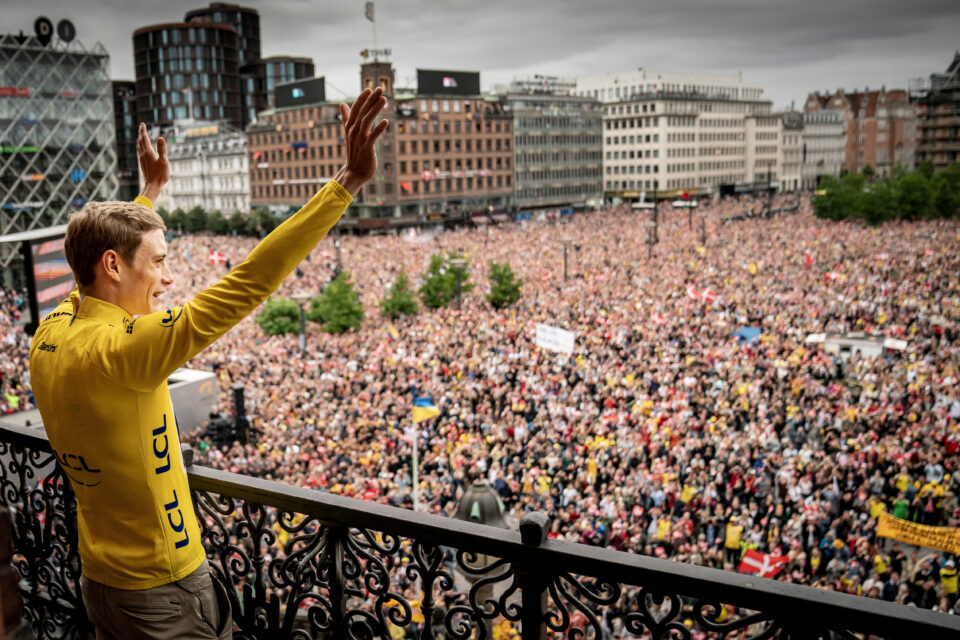 Tour de France winner Jonas Vingegaard was clearly moved as he was celebrated by thousands of jubilant Danes on Wednesday in Copenhagen where the world’s biggest cycling race kicked off nearly a month ago.

“It’s fantastic. I’m almost completely speechless. I don’t know what to say,” Vingegaard said, before stepping onto a balcony where he was greeted by a throng of flag-waving Danes on Copenhagen town hall square.

The softly-spoken Vingegaard, who struggled with anxiety earlier in his career, was only the second Dane to win the world’s biggest cycling race since compatriot Bjarne Riis became the first to do so in 1996.

Vingegaard and his family was flown by private plane to Denmark on Wednesday following celebrations in the Netherlands, home to his team Jumbo-Visma.

When the plane entered Danish air space, it was escorted by two F-16 fighter jets from the Danish Defence, a tradition held to honour gold-winning Danish athletes upon their return.

“We both took the day off just to come here and celebrate Vingegaard,” said Rene Max Hansen, 29, waiting with his brother near the Copenhagen city hall square.

“I bike myself and just recently managed to persuade my brother to buy a racing bike. The euphoria is contagious,” he said.

The 25-year-old, who five years ago was working as a fish packer in a factory in the morning before training in the afternoon, followed up on his surprise second place last year.

Vingegaard laid the foundations of his victory in the 10th stage of the Tour, when he and his team mate Primoz Roglic attacked rival and two-time winner of the race, Tadej Pogacar, relentlessly and made him crack in the climb up to the Col du Granon.

The Dane, who joined the Jumbo-Visma cycling team in 2019, sealed the victory when he claimed another win at Hautacam in the final mountain stage.

“It was really emotional to watch him take the yellow jersey and defend it the way he did,” said Miriam Fibiger, who drove across the country form her hometown in southern Denmark to join the celebration.

Wearing a yellow Tour de France t-shirt and yellow bicycle-shaped earrings, Fibiger was queuing up to enter the Tivoli amusement park in central Copenhagen, where Vingegaard will be celebrated later on Wednesday.

Vingegaard thanked his first bicycle club Thy Cykle Ring, and sent his gratitude to volunteers in cycling sport clubs across the country, without which he said he wouldn’t have won the Tour de France.

His home town of Glyngore in northern Denmark will host Vingegaard for further celebrations on Thursday.

Denmark hosted the first three stages of the Tour de France, with the first stage a 13km time trial through the Danish capital, known as the world’s most bike-friendly city.