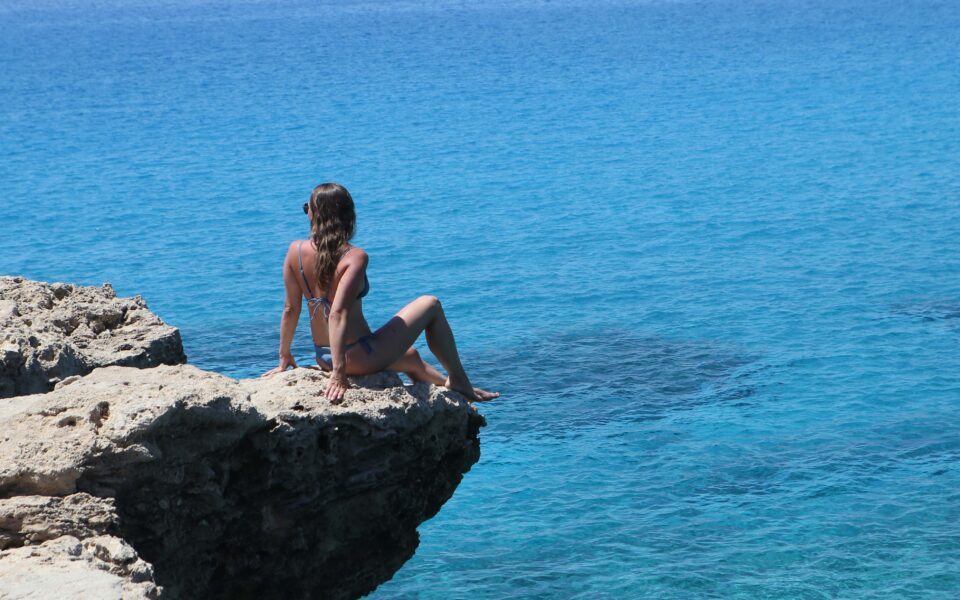 A young woman perches on the edge of a cliff on Thursday (Photos: Christos Theodorides)

New efforts to prevent people from diving from the dangerous rocky coastline in Cape Greco appear to have failed in stopping visitors from trying their luck and risking their lives to jump into the crystal-clear waters.

Dozens of locals and tourists travel to Ayia Napa every summer to see in person the famous tourist attraction and capture a photo at the Instagrammable shore. Most of them, will also walk down the rocks to swim, or even jump off the cliff into the water.

This is not allowed since an inspection by the geological survey department found the ground dangerous due to increased erosion. Hence, according to the joint rescue and coordination centre (JRCC), not just diving but also approaching the sea caves in Cape Greco is “strictly prohibited”.

Ayia Napa municipality has recently placed a person in charge at the site to inform visitors of the dangers and prevent them from diving. New warning signs have also been placed a few days ago, municipal secretary Fotos Kikillos told the Sunday Mail.

“Many people ignore the ‘guard’ saying they are jumping at their own risk,” Kikillos said. They might do it to compete among themselves, or to take the perfect shot, or they simply jump because it is fun, and most importantly – consequence-free, apart from injury or death.

Despite the prohibition, there is no fine foreseen for those who break it, and apart from warning them of the risks, the municipal worker guarding the area can do nothing more.

Besides, a lot of people visit the area at night as well after the appointed person leaves.

“We are trying everything humanly possible to prevent it,” the municipal secretary added. The municipal worker is at Cape Greco from 9am to 5pm.

He can also provide first aid to anyone who might be injured and there is a lifebuoy ring that can be used.

So far this year, there were two injuries in the sea caves. Both took place this month and required hospitalisation after they were rescued by the JRCC. The first concerned a 21-year-old British man and the second, which occurred this Monday, a Belgian tourist who fell on to solid rock.

Based on JRCC records, there are on average six to seven injuries at the site every year for the last decade or so.

And the risk extends to those participating in rescue missions who are also putting their own lives in danger when they go to locate reckless swimmers.

This is why some believe the broader area should be closed off and no entry to be allowed to visitors. But this scenario is unlikely to be materialised as the beautiful sea caves are one of the main tourist attractions of the region.