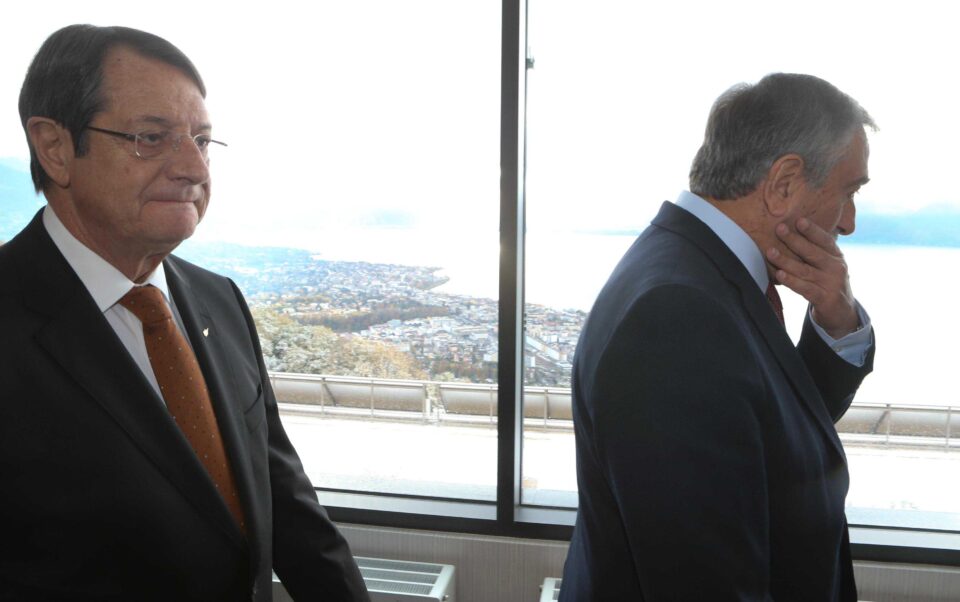 Arguably, the most interesting part of the television debate of the presidential candidates was the row about the choices made at the Cyprus talks in Mont Pelerin and later in Crans-Montana between Andreas Mavroyiannis and Nicos Christodoulides. The former accused the latter of negatively influencing President Anastasiades at Mont Pelerin and urging him to leave, despite the fact that a big breakthrough had been achieved on the issue of territory. Not only had the Turkish side agreed to discuss the issue for the first time, but the proposals of the two sides were just one per cent apart.

If Mavroyiannis thought that Anastasiades had committed a grave blunder in abandoning the Mont Pelerin talks, why had he not submitted his resignation as negotiator, asked Christodoulides. It was a valid question, although on the same show we learned that Christodoulides also chose not to resign when the president took a decision he viewed as a betrayal of the country. On general lines, however, Christodoulides, who fully supported and encouraged Anastasiades’ negativity and unwillingness to seize the best-ever opportunities for a settlement, has nothing to answer.

Mavroyiannis’ behaviour, in contrast, lacked integrity and moral courage. He had seen the president, according to his latest account, blow the best chance for a settlement offered – abolition of guarantees and unilateral intervention as well as withdrawal of occupation troops, apart from a contingent of 600 soldiers – and instead of speaking out he not only carried on as negotiator, but he happily repeated Anastasiades’ narrative about Turkish intransigence in public. He even publicly backed the presidential myth about a second, amended Guterres framework, which he knew did not exist.

He decided to speak out five years after the best opportunity for the country’s re-unification was sabotaged by Anastasiades, and only because he is the candidate of the pro-settlement Akel, which has consistently criticised the president’s handling of the Cyprus problem. Once Mavroyiannis spoke out, other members of the negotiating team somehow, mustered the courage to speak out about the wasted opportunity of five years ago and challenge the presidential narrative.

On Tuesday, Akel’s Cyprus problem expert and member of the negotiating team, Toumazos Tselepis told Politis radio that the UN Secretary-General had informed Anastasiades that the Turkish side had given him a confidential document about the abolition of guarantees and intervention rights and the withdrawal of troops, to be replaced by a supervisory mechanism for the implementation of a settlement. All that would remain were the Greek and Turkish contingents, but the prime ministers of the guarantor powers would have discussed this matter. Anastasiades wanted the contingents out as well, said Tselepis, a stance that ensured 30,000 instead of 600 Turkish troops would be stationed on the island.

On Friday another member of the negotiating team – prominent lawyer Polys Polyviou – also spoke out, five years too late, telling Politis radio, “we lost two big opportunities,” in 2016 and 2017. Polyviou fully backed Tselepis’ assessment of what happened, regarding the abolition of guarantees and gradual withdrawal of troops, which Turkey indicated “clearly”.

Anastasiades issued a statement in response to Tselepis on Wednesday, dismissing his claims “as groundless and malicious,” saying these were negated by the Crans-Montana minutes of the UN. According to the UN minutes, as published in Phileleftheros, the UN Secretary-General said, that “based on a confidential document from Turkey… Turkey indicated the intention to abolish the Treaty of Guarantee of 1960 and the unilateral right of intervention.”

So how could Anastasiades insist that what Tselepis and, by implication, Polyviou were saying was “totally groundless and malicious”? It is not “the Akel narrative about the collapse of the talks in Crans-Montana claiming that the President was chiefly to blame,” that is groundless. It is Anstasiades’ narrative that was always groundless, blaming Turkey’s intransigence after he had spurned “two big opportunities” for a settlement without guarantees, without the right of intervention and with the withdrawal of the occupation troops.

His dubious narrative, however, became generally accepted as an accurate version of what happened, because all the people at the talks did not have the moral courage to speak out at the time and challenge it as was their obligation to the country. Instead, they all kept quiet for five years in case Anastasiades and his spokesman accused them of adopting Turkey’s version of events. Christodoulides accused Mavroyiannis of this in the TV debate.

Speaking out now is far too late. The “two big opportunities” Polyviou mentioned on Friday are lost forever, because nobody, in the know had the courage to speak out and challenge Anastasiades, when it mattered, five years ago. Now, we are just crying over spilt milk.

Tales from the Coffeeshop: Third-term dreams and the Gesy Antichrist

Coronavirus: 3,853 new infections detected in the past seven days