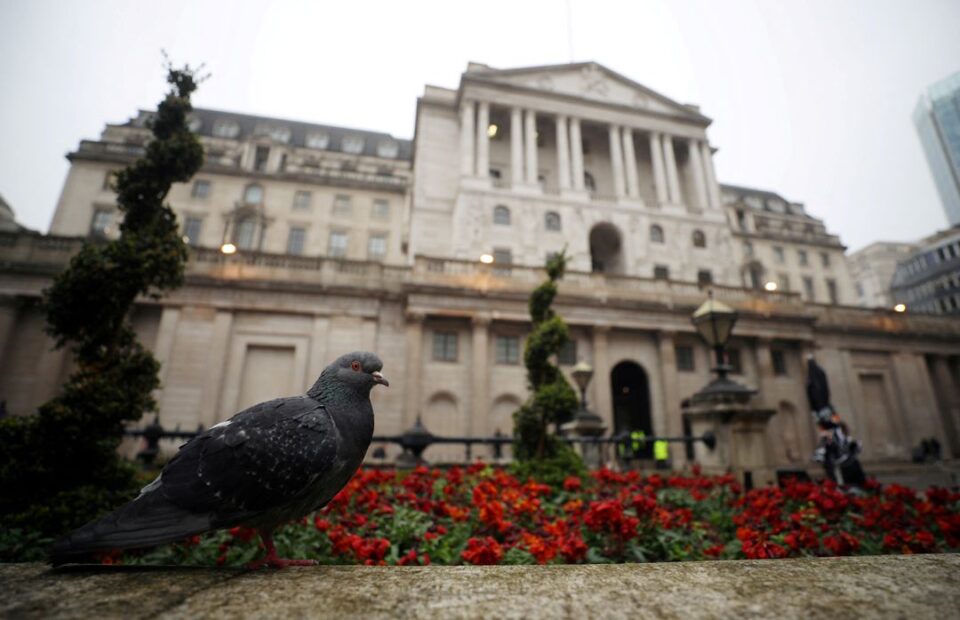 The Bank of England raised interest rates by the most in 27 years on Thursday, despite warning that a long recession is on its way, as it rushed to smother a rise in inflation which is now set to top 13%.

Reeling from a surge in energy prices caused by Russia’s invasion of Ukraine, the BoE’s Monetary Policy Committee voted 8-1 for a half percentage point rise in Bank Rate to 1.75% – its highest level since late 2008 – from 1.25%.

The 50-basis-point increase had been expected by most economists in a Reuters poll as central banks around the world scramble to contain the surge in prices.

Governor Andrew Bailey said all options were on the table for the BoE’s next meeting in September, and beyond.

“Returning inflation to the 2% target remains our absolute priority. There are no ifs and buts about that,” Bailey said at a news conference. Read full story

The BoE warned that Britain was facing a recession with a peak-to-trough fall in output of 2.1%, similar to a slump in the 1990s but far less than the hit from COVID-19 and the downturn caused by the 2008-09 global financial crisis.

The economy would begin to shrink in the final quarter of 2022 and contract throughout all of 2023, making it the longest recession since after the global financial crisis.

Ushering in the slowdown, consumer price inflation was now likely to peak at 13.3% in October – the highest since 1980 – due mostly to the surge in energy prices following Russia’s invasion of Ukraine.

That would leave households facing two consecutive years of declines in their disposable incomes, the biggest squeeze since these records began in 1964.

Sterling fell against the U.S. dollar while futures priced in a further 25-basis-point rise in interest rates, to 2%, for the next BoE meeting in September. Read full story

British consumer price inflation hit a 40-year high of 9.4% in June, already more than four times the BoE’s 2% target, triggering industrial action and putting pressure on whoever succeeds Boris Johnson as Britain’s next prime minister to come up with further support.

The BoE had previously expected inflation to peak at above 11% and almost no growth in Britain’s economy before 2025 at the earliest.

In its new forecasts, the BoE saw inflation falling back to 2% in two years’ time as the hit to the economy took its toll on demand.

Bailey said the risks to the BoE’s outlook were “exceptionally large”.

The British central bank has now raised rates six times since December but Thursday’s move was the biggest since 1995.

The pressure on Bailey and his colleagues to move in larger steps intensified after recent big rate hikes by the U.S. Federal Reserve, the European Central Bank and other central banks.

Those moves weakened the value of the pound, which can add to inflation.

The BoE repeated that it was ready to move forcefully if needed to stem more persistent inflationary pressures.

But it stressed that there were “extremely large” uncertainties about the economy – which could make the slowdown more or less severe than its core forecasts – and it would judge what its next moves should be as events unfold.

“Policy is not on a pre-set path,” the BoE said. “The scale, pace and timing of any further changes in Bank Rate will reflect the Committee’s assessment of the economic outlook and inflationary pressures.”

On top of everything else, the BoE’s inflation-fighting record has been called into question by Liz Truss, the front-runner to be Britain’s next prime minister.

She wants to set “a clear direction of travel” for monetary policy and to review the BoE’s mandate. Read full story

The BoE said it expected to start selling down its huge stockpile of government bonds, with active sales of around 10 billion pounds a quarter, shortly after its next meeting in mid-September.

The gilt holdings peaked at 875 billion pounds in December and have since fallen to 844 billion pounds after the BoE stopped reinvesting the proceeds of maturing bonds in February.