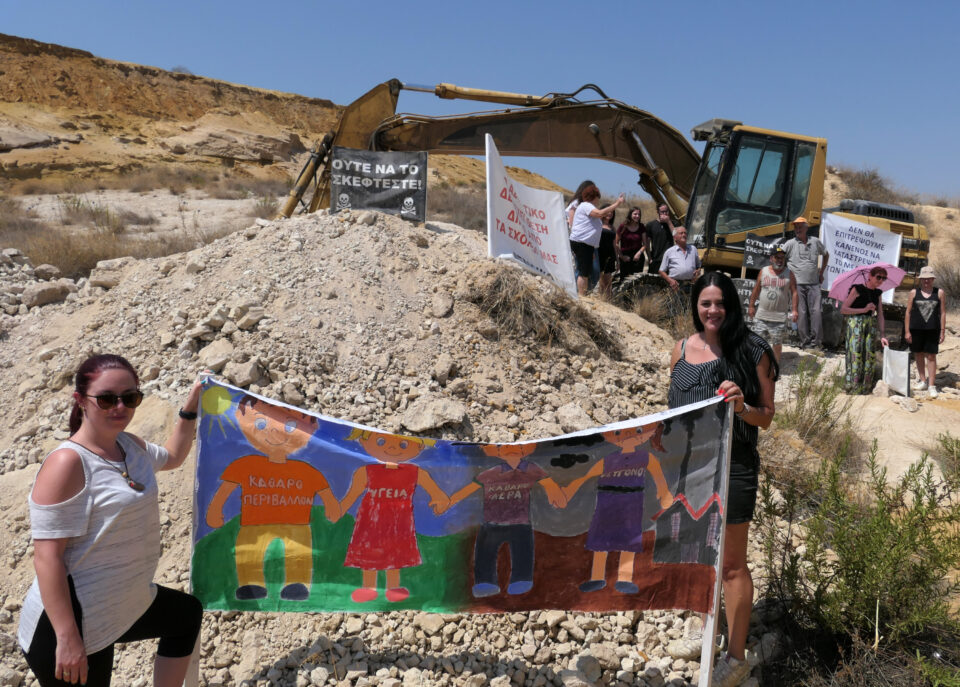 An excavator sent to the Mitsero area to delineate a planned asphalt factory left early on Thursday morning, ending a three-day standoff at the site and clearing the way for demonstrators to suspend their protests.

The decision to halt the works came on Wednesday after the leaders of the 12 communities in the area received “verbal reassurances from the president’s office that the excavation works will not go forward for the time being”.

A meeting between the community leaders and President Nicos Anastasiades has been scheduled for August 25. Until then, no works at the site will be carried out.

Protesters, who had vowed to stay on site round the clock until the excavator leaves, have disbanded their makeshift camp and dispersed.

A prayer service was also held by priests from the region of the 12 affected communities on Kato Moni – Agios Ioannis road at 7am on Thursday.

The 12 communities argue that their area is already over-burdened with polluting units and that the proposed factory should be relocated elsewhere.

The recent developments come after days of tension, culminating with accusations of police brutality against the demonstrators.

However, on Wednesday, a police officers’ association rejected the accusation of police brutality during the protests.

The community leaders of Mitsero and Agrokipia, Andreas Kyriacou and Sotiris Kyriacou were arrested early on Tuesday for obstructing the progress of the excavator and for verbally insulting police. They were taken to Lakatamia police station where they were charged and released.

Following the arrests, the Cyprus environmental movement group (PKK) called for their release claiming police used “excessive force”. The NGO also called for an end to any work to install the “death factory”.

Political parties and other organisations also echoed the criticism of police.

Videos published on social media on Tuesday show the tense situation between the demonstrators and police officers, who pushed and shoved several people.

Following a public outcry accusing the police of excessive force use, the police officers’ association Isotita (Equality) said that the accusations are unfounded, adding that the issue started when an officer had to be taken to hospital after feeling ill due to the severe heat.

“The pushing and the shoving only took place when police officers needed to create the space for their colleague to be taken to hospital.”

Loizides added that he understands the outcry stemming from the planned relocation of the asphalt plant in the area.

“There are police officers living in the area as well. But we have to maintain order. Justice needs to be sought in courts, through laws and regulations. Injustice is one thing and maintaining order is another,” Loizides said.

Meanwhile, a study carried out prior to the decision to relocate the asphalt plant from Dali to Mitsero showed that there would be no consequences on the health of the area’s residents, the agriculture ministry said in a statement on Thursday.

The agriculture ministry issued the statement in response to an article published by daily Politis, which claimed that no environmental studies were carried out in Dali following widespread protests by residents regarding the asphalt plant, as well as prior to the planned relocation of the factory in Mitsero.

The planned relocation of the asphalt plant has been at the centre of protests in recent days. After lengthy demonstrations, the ongoing works at the site have been interrupted and the leaders of the 12 communities in the area are due to meet President Nicos Anastasiades on August 25 to discuss the matter.

Following complaints by residents in Dali regarding the asphalt plant, the council of ministers appointed an inter-ministerial committee which included the agriculture ministry, the interior ministry, the energy ministry, the health ministry and the labour ministry, the statement said.

The committee was tasked with compiling a study analysing the environmental impact of the plant, as well as regulating the incomplete legislative framework for its operation, drawing expertise from an academic advisory group, as well as from relevant governmental departments in order to manage the complex issue, it added.

The statement said that one of the conclusions of the study compiled by the committee was that the plant in Dali was given the green light without there being the necessary environmental conditions, as there were no regulations at the time.

“A new set of guidelines regulating the operation of asphalt plants was then laid out by the committee and approved by the House,” the agriculture ministry said.

“As a result, asphalt plants are now included in the facilities that need to obtain a gaseous waste emission permit before being allowed to operate.”

According to the statement, the decision to relocate the plant was taken due to its proximity to residential areas and to the potential impact on the health of people living nearby.

At the same time, the same legislative framework used to halt the establishment of the plant in Dali, allowed for it to be built in Mitsero, where, according to the agriculture ministry, the impact on people’s health would be kept to a minimum.

“Studies and rules laid out to set the necessary conditions for the plant to be established, the same ones that made it impossible to open it in Dali, showed that it would not cause any negative impact on the quality of life and the health of residents of surrounding communities in the new location,” the statement concluded.