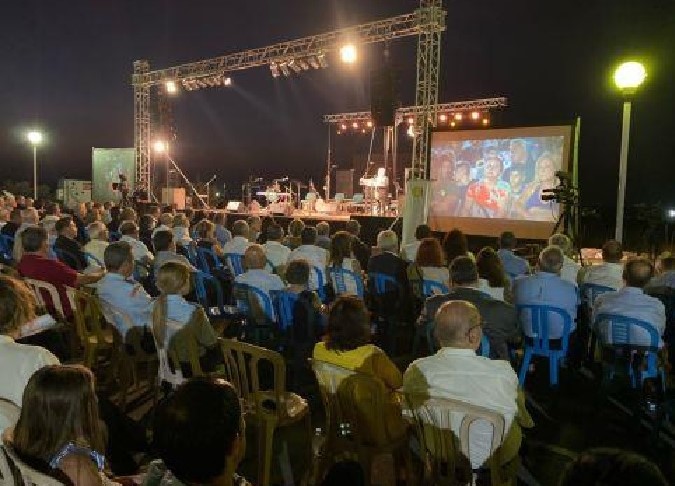 Event for Famagusta in Dherynia (CNA)

The people of Famagusta are tired of 48 years of false hopes of return and everything the government is doing is leading nowhere, the mayor of the occupied town has said.

Over-ambitious announcements about sanctions against Turkey are not enough to save Famagusta, said Simos Ioannou at an anti-occupation event on Saturday night.

Ioannou said the people of Famagusta would never accept partition as an option and only an immediate return to the negotiating table could secure their return to their homes.

“We are here again not to forget how many times in these 48 years our minds were filled with false hopes for the return of Famagusta,” he said. “How many times have we believed that the return of the enclosed area will be the beginning for the overall solution of the Cyprus problem?”

He said this year’s event was taking place at a critical moment “critical for the case of the return of Famagusta, critical to the Cyprus problem, critical for Cyprus and our people”.

“The rage, indignation and anger that flooded us here exactly a year ago are unfortunately deepening and perpetuating, causing bitterness and pain to grow,” he added, referring to the continuing Turkish provocations in the fenced area of Famagusta.

Ioannou said it must be clear to all that stagnation in the Cyprus issue does not offer security and does not even constitute a maintaining of the status quo.

The negative actions taking place in the city are the result of the prolonged negotiations gap after the collapse of the Crans-Montana conference in 2017, he said

“We all must finally realise that the only way to save Famagusta is to return to the negotiating table. Neither the over-ambitious announcements about sanctions against Turkey, which would be fair, nor the efforts of the foreign ministry, which were admittedly done honestly and sincerely, are not sufficient actions to save Famagusta”, he added.

He said that steps should be taken immediately to return to the negotiating table.

“If we allow time to pass, under the pretence that all the parties concerned are in consecutive election periods, then we are simply giving time to Turkey and Erdogan to proceed undisturbed with their plans in Famagusta.”

At the same time, he said, it was up to everyone to reach out to the progressive forces in the Turkish Cypriot community who are resisting Turkey’s plans to annex the north and secure a two-state solution.

Ioannou said the perception that all Turkish Cypriots are helpless pawns of Ankara was wrong.

“Tonight, we again send a message of common struggle for our common homeland, to our compatriots on the other side of the barbed wire who, like us, are asking for reunification, independence, peace,” he said.