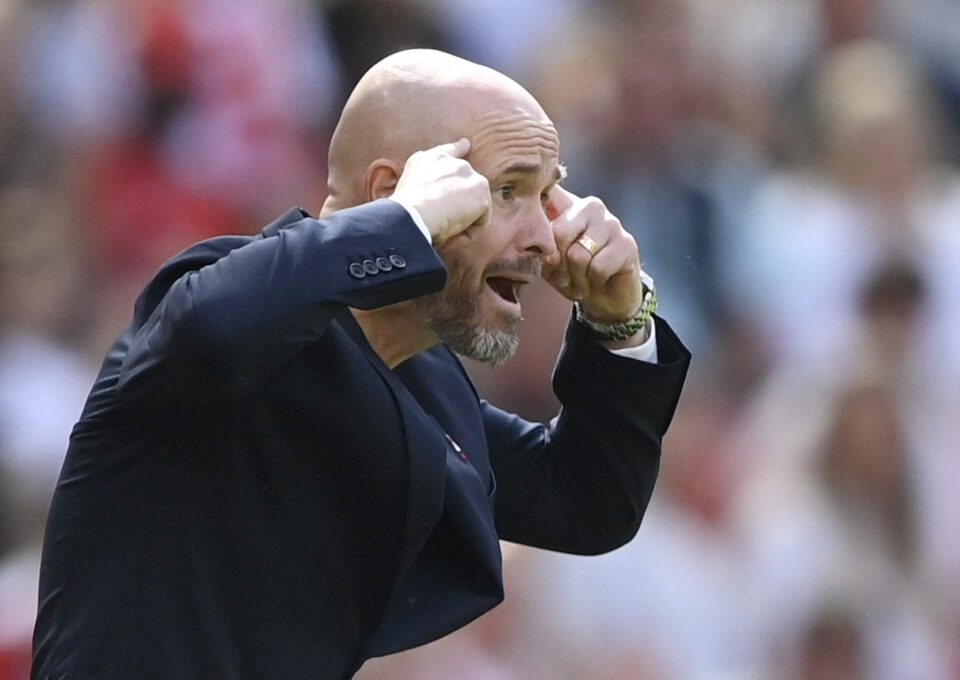 The Erik ten Hag era at Manchester United began with a 2-1 Premier League defeat at home to Brighton & Hove Albion on Sunday as the Dutch manager was shown just how much work is ahead of him.

There were yet more loud and angry protests against United’s owners, the American Glazer family, before the kick-off and it was also a familiar scene on the field.

Brighton took the lead on the half-hour with Leandro Trossard finding former United forward Danny Welbeck who squared the ball to the back post for Pascal Gross to slot home.

Nine minutes later, Gross doubled the lead, with his sixth career goal against United, after David De Gea had poorly pushed out a Solly March drive right into the path of the German who again made no mistake.

Ten Hag introduced Cristiano Ronaldo in the 53rd minute and the Portugal forward, who is reported to want to leave the club, provided the spark for United’s attempted comeback.

The home side gave themselves a foothold in the 68th minute when a goalmouth scramble ended with Alexis Mac Allister turning the ball into his own net but Brighton held on for a second straight win against United, following their 4-0 victory in May.

Substitute Josh Dasilva scored a superb equaliser with four minutes remaining as Brentford came from two goals down to draw 2-2 with Leicester City in their Premier League clash at the King Power Stadium on Sunday.

Dasilva went on a mazy run on the edge of the box before curling a shot into the far corner, a goal of real quality to give Brentford a point they deserved for their second-half display.

Timothy Castagne and Kiernan Dewsbury-Hall had scored in either half to put Leicester into a dominant position early in the second period, but Ivan Toney netted to halve the deficit and swing the momentum in Brentford’s favour.

It was the first time since 2003 that Leicester had failed to win a Premier League home game having been two goals ahead.

“Everything had what we wanted but then we lost too many balls, gave the ball away too easy and then we got loose in our organisation.

“It’s first game of the season and there was a bit of fatigue kicking in. I think what happens is when you tire a bit, you suffer technically.

“They’re a tough opponent. They showed last season that they’re a dangerous team to play against.”

Leicester went ahead just past the half-hour mark as James Maddison swung in a corner and Castagne headed in at the near post, totally unmarked with no Brentford player tracking his movement.

Youri Tielemans hit the frame of the goal with a shot from 25 metres, before Leicester doubled their advantage straight after halftime.

A poor touch from Brentford defender Ben Mee allowed Jamie Vardy to tee up Dewsbury-Hall to fire a low shot from 30 metres into the bottom corner of the net.

Brentford were much improved in the second period though and scored an excellent goal on 62 minutes as Rico Henry’s pinpoint pass into the box was controlled by Toney, who blasted the ball past home goalkeeper Danny Ward.

Leicester hit the post for a second time through Wesley Fofana’s header, before Dasilva produced his moment of magic to get Brentford a point.

Leicester travel to Arsenal in their next fixture on Saturday, while Brentford will host Manchester United later on the same day.