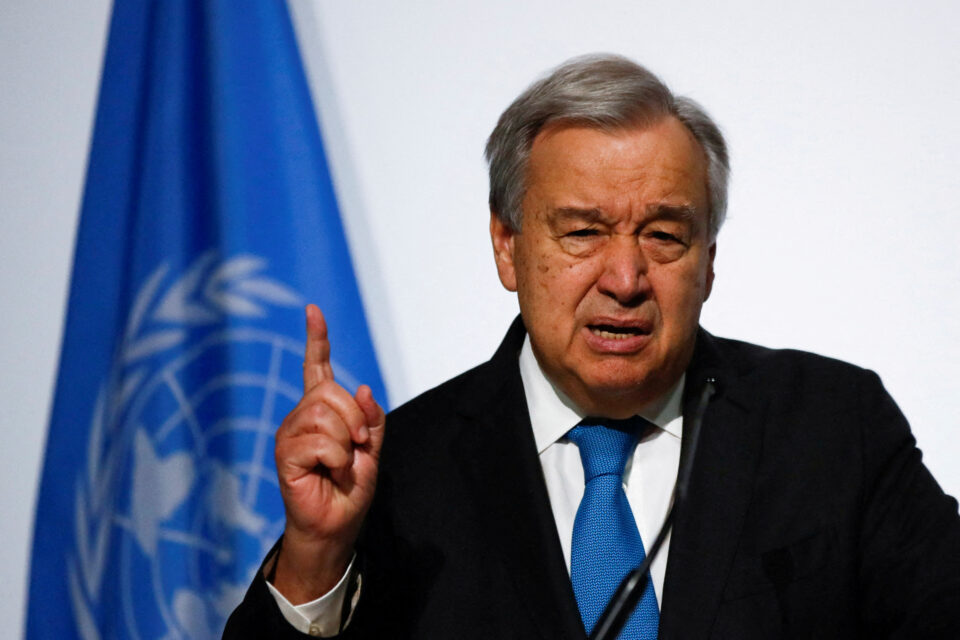 At a massive cost to us all – except the oil companies

“I urge people everywhere to send a clear message to the fossil fuel industry and their financiers: that this grotesque greed is punishing the poorest and most vulnerable people, while destroying our only common home.”

That was the United Nations Secretary-General Antonio Guterres last week. The greed of which he spoke was that of the oil and gas companies in North America and Europe who have been profiteering from the scarcity of oil and gas caused by the sanctions imposed on Russia over her attack on Ukraine last February.

My column this week is in answer to the call of the UN secretary-general to urge multinationals to stop profiteering on the backs of the poor and vulnerable. As Antonio Guterres said: “It is immoral for oil and gas companies to be making record profits from this energy crisis on the back of the poorest people and communities, at a massive cost to the climate.”

He pleaded with governments “to tax these excessive profits, and use the funds to support the most vulnerable people through these difficult times,” and he is absolutely right. There is no reason why windfall taxes should not be imposed on all profiteering oil and gas companies, ring-fenced to pay for the impending cost of living crisis to help those least able to ride it. Tax cuts for middle to high-income earners leaving them with more money to pay for the increase in cost of living does nothing for the poor who do not have an income from which to benefit from tax cuts.

US-owned Exxon Mobil and Chevron, British-owned Shell and BP and France’s TotalEnergies announced huge profits. Between them they raked in more than $60 billion last quarter. They are profiteering at the expense of the people in Europe and America, many of whom have been manipulated by so much false consciousness that they cannot see that the crises in both Ukraine and Taiwan are the fault of their leaders.

Profiteering in time of war is particularly wicked should be a criminal offence. However, for big multinational oil and gas companies a windfall tax is a better tool against profiteering, provided always the revenue from it is used to alleviate the plight of the poorest across the world. To be fair, I believe the UK government does and will impose a windfall tax though I am not sure how the money will be used.

But the impending cost of living catastrophe requires the root of the problem to be addressed too. Governments in the West should admit, at least to themselves, that it was a mistake to encourage Ukraine to join Nato and then impose sanctions on Russia for resisting the presence of Nato in her backyard.

As every physics student knows, for every action there is an equal and opposite reaction. If the West sanctions Russia, Russia will sanction the West. It was all very well for western leaders to wax eloquent about the severe sanctions the West would impose on Russia for her policy on Ukraine as if Russia would not hit back. What people were not told was that sanctions on Russia would cause the worst cost of living crisis in living memory.

Let’s face it, the reality is that if the West lifts sanctions on Russia, Russia would turn on the gas and the cost of living crisis would be over and the whole of Europe would breathe a sigh of relief. People are beginning to ask why the whole world should suffer a steep cost of living crisis just because an irresponsible leadership in Ukraine wanted to join Nato, a policy they knew would enrage Russia?

And yet we are about to make the same mistake with China. Wisdom dictates we learn from our mistakes, but you cannot do that if you don’t see them as mistakes. The same tragic scenario as Ukraine is being played out over Taiwan following the provocative visit of the leader of the US lower legislature, Nancy Pelosi, to Taiwan that infuriated the government of the People’s Republic of China. She is a loose cannon, and her visit had no purpose other than her self-aggrandisement.

Despite being 82-years-old Pelosi has no sense of history. Just after World War II there was a civil war in China between the communists under Mao Zedong and the nationalists under Chiang Kai-shek. The communists won and set up the People’s Republic of China (PRC) and the nationalists escaped to Taiwan and set up a breakaway state that was recognised by the West as the legitimate government of the whole of China known as the Republic of China (ROC).

In the 1970s the Americans realised that the PRC was too big to ignore and the ROC too small and unrepresentative of the whole of China and changed tack.

They retained their one-China policy but the other way round: the People’s Republic was recognised as the government of the whole of China with a seat in the UN Security Council and the ROC was de recognised and became one of a number of unrecognised entities dotted round the world, though a very successful one. It also became democratic and the world’s primary supplier of semiconductor technology indispensable to the world’s computer-run economies.

Unfortunately, the present crop of leaders in Europe and America are not up to the task of keeping the world in peaceful balance. They are blundering into two proxy wars oblivious to their effect on the cost of living around the world and without the sense of realpolitik that guided previous generations of leaders.

After Angela Merkel retired, the West is rudderless except for the UN Secretary General Antonio Guterres and, dare I say it, President Erdogan of Turkey who persuaded Russia and Ukraine to cooperate to avert global hunger and refuses to impose sanctions on Russia.

So credit where it is due and if Erdogan plays his cards right and sorts out the Cyprob as well, who knows he may be in for a surprise prize more prestigious than Orhan Pamuk’s.

‘Turkey’s resolve should not be tested’