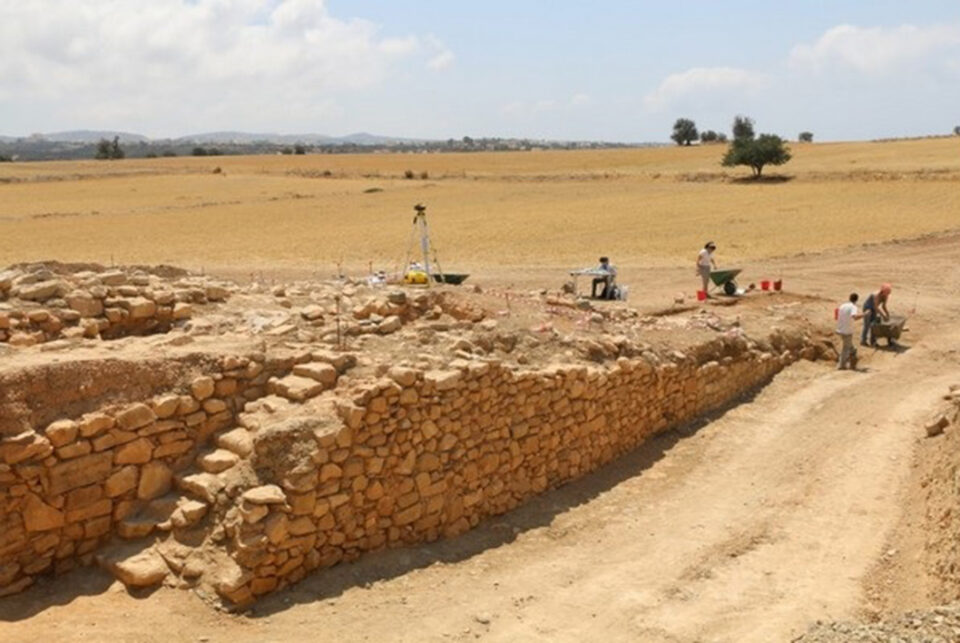 East side of the rampart with the southern staircase

Archaeologists have discovered that the tumulus of Laona, an ancient burial mound, has been hiding an architectural structure that was built by experienced engineers to become a lasting mega-monument, the antiquities department said on Friday.

“The rare and mysterious tumulus, which until recently concealed the existence of the rampart, is a mega-monument whose construction would have required the mobilisation of a huge and experienced workforce under the guidance of expert engineers,” an announcement said.

The rampart, a broad embankment raised as a fortification, on top of which the mound was erected, is believed to be Cypro-Classical and built most probably at the end of the 4th century or early in the 3rd century BC.

The antiquities department said the 2022 field team “was met with another surprise” when the rampart, instead of turning to the west under the mound’s summit, was found crossing over to the north side with its wall follows a descending north-west course, which is “in an excellent state of preservation”, it said.

Together with the east section, the total length of “this rare defensive monument” is currently 160 metres and its internal area is at least 1,740 square metres. The width of the rampart is 5 metres and it is built with stacks of mould-made mudbricks placed between parallel walls of unworked stones.

“From now on, a main goal of the Laona project is to show that Laona is a burial tumulus; also, to identify the political agent behind its construction,” the antiquities department said.

Laona, in the Paphos region, combines two monuments that are so far unique in the archaeology of Cyprus.

The royal dynasty that ruled Paphos to the end of the 4th century BC is credited for the construction of the rampart, which is chronologically and functionally related to the palatial and the workshop complexes on the citadel of Hadjiabdoulla, only 70 metres to the south of Laona.

Sections of the floor of the rampart, that were exposed near the foundations of the wall, show that the bedrock had been levelled; a thick layer of river pebbles was placed on top of it and on top of that a layer of red soil, which is full of sherds. The red soil is currently being analysed to determine whether it has the same consistency as the mudbricks.

A third staircase, less well-preserved than the two staircases on the east wall, was also discovered on the highest surviving sector of the rampart. The steps are made of mudbricks, but for reasons of safety, their excavation was discontinued after the first five steps were exposed, the antiquities department said.