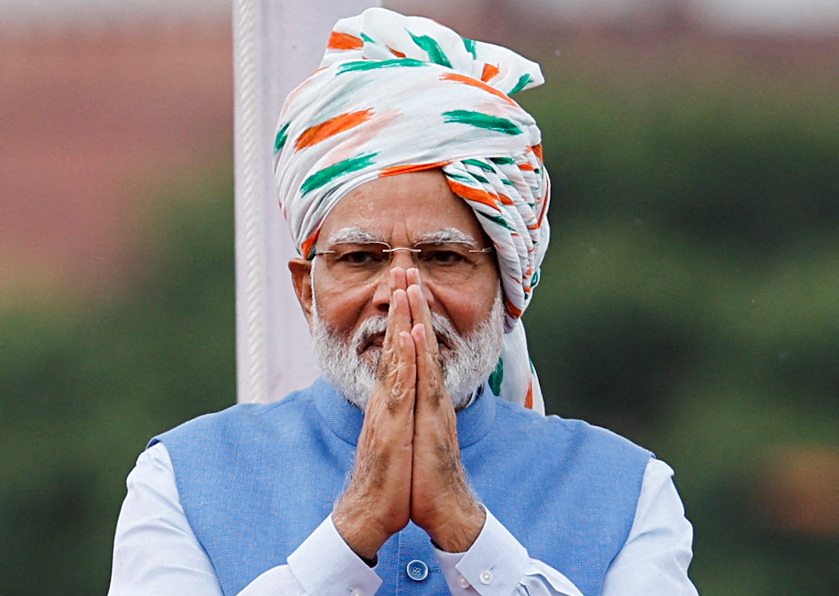 Last Tuesday, on the 75th anniversary of Indian independence, Prime Minister Narendra Modi promised to turn India into a developed country within the next 25 years. If all goes well, that could actually come to pass, but it would have to go very well indeed.

The demographic and economic signs are positive. The country’s population has grown fourfold since independence in 1947, but population growth has now dropped to ‘replacement level’: 2.1 children per completed family.

The current youngest generation is so large that the population will keep growing until 2060, when it will have reached 1.7 billion. The upside of this is that India will continue to have a rapidly growing young workforce for another generation, while its only rival, China, will have a rapidly ageing and dwindling population (1.2 billion and still falling in 2060).

India’s GDP per capita has been growing at about 5 per cent for years, and if that continues for the next 25 years it will have grown to $7,500 per person. That’s certainly within the lower ranks of developed countries (like Mexico, South Africa or China today). Given the size of India’s population the economy would certainly rank in the world’s top five.

So Modi’s prediction was certainly within the realm of possibility, but there are two big wild cards. One is climate: although only half of India technically falls within the tropics, all of it except the very far north suffers long, very hot summers.

This summer has been the hottest ever, with many of the largest cities experiencing temperatures above 45°C for days at a time. Whatever we do about climate in the future, it can only go on getting worse for India for the next 25 years.

That will bring the country into the zone where it literally becomes unsafe for people to do manual work outside at the height of summer; death rates will go up, and food production will go down. Nobody knows exactly how bad it will get, but it will certainly get much worse that it is now.

The other wild card is war. Since the Indian and Pakistani tests of nuclear weapons in 1999, the subcontinent has lived under the threat of a ‘local’ nuclear war that would devastate both countries (and also cause global food shortages lasting for at least four or five years).

An Indo-Pak nuclear war is not inevitable, but unlike the major nuclear powers these two countries have fought real wars against each other – three in the past 75 years. The likelihood of such a catastrophe actually happening is certainly a lot higher than zero.

Each country now has about 160 nukes, and although both are now working to move beyond the dangerously unstable ‘use them or lose them’ phase where a surprise attack might disarm the other side, there is no real stability to be found when the adversaries are so close and the hostility is so intense.

So there is no harm in considering whether it might have been better to keep the entire Indian subcontinent, first united by the British empire, in one piece at independence rather than splitting it into two countries (and eventually three, counting Bangladesh).

The split was by no means inevitable. Both Mahatma Gandhi and Jawaharlal Nehru, the two main Hindu leaders of the independence movement, wanted an inclusive, non-sectarian republic including all of British India, although they failed to offer Muslims sufficient guarantees to ensure their support.

Muhammad Ali Jinnah, the main Muslim leader in 1947, did want to carve a Muslim-majority Pakistan out of the country, but there was no obligation for the British government to satisfy his demand. He got his way because the United Kingdom was virtually broke after the Second World War and in a great hurry to dump its responsibilities in India.

Sir Cyril Radcliffe, a British lawyer who had never been east of Paris, had five weeks to draw the dividing line between the two new countries. Around 15 million people who found themselves on the wrong side of that line became refugees, mutual massacres followed, and within weeks India and Pakistan had their first war. But it could have been different.

The undivided ‘big India’ would have 1.8 billion people today, about one-third Muslim and two-thirds Hindu. That would virtually guarantee that both groups would be represented in every government and in most political parties.

Lots of countries elsewhere in the world manage to be both democratic and prosperous with comparable religious and/or ethnic differences. The ‘big India’ would not have wasted 75 years’ worth of high defence spending, and there would be no risk of nuclear war.

All those energies would have been devoted instead to civilian priorities, and that united India might already rank as a developed country. Might-have-beens.

Gwynne Dyer’s latest book is The Shortest History of War