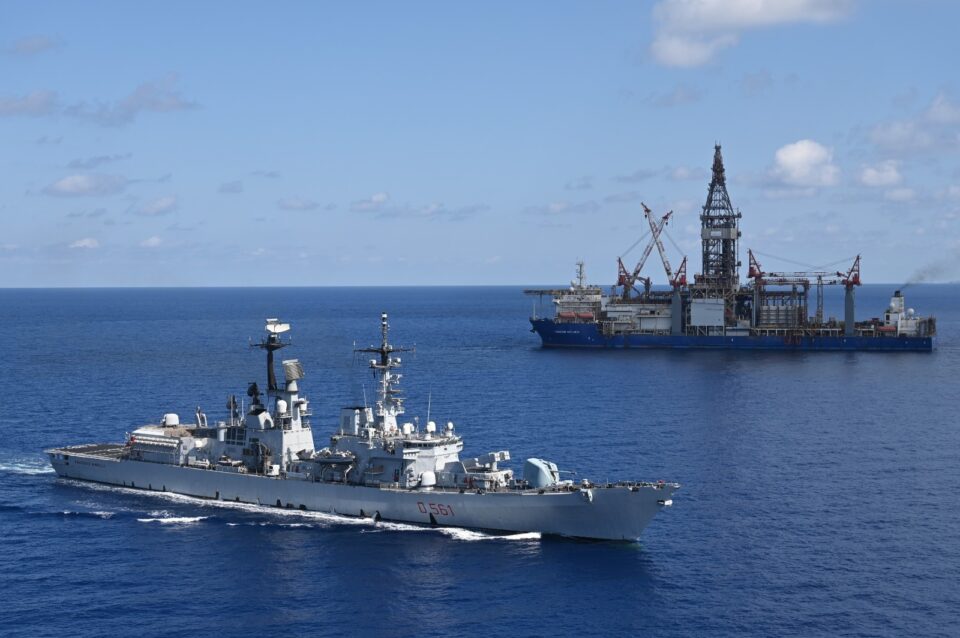 The Eni drill ship in block 6 of Cyprus' EEZ

With the world gripped by an ever-deteriorating energy crisis, with gas supplies and prices playing a central role, the discovery of a new gasfield offshore Cyprus by Eni/TotalEnergies, Cronos-1 in block 6, is undoubtedly a welcome development. But despite the initial euphoria that accompanied this, we must look at it with a degree of realism.

By any measures, this is a small discovery. The 2.5 trillion cubic feet (tcf) Cronos-1 is estimated to hold will not make much of an impact in regional or global markets, even if it is substantial in terms of Cyprus modest gas needs. To put it in context, it is equivalent to about one-year’s gas production in Egypt.

But it is significant in two respects. It increases Cyprus discovered gas reserves to around 13tcf – all in areas not subject to dispute – and confirms that the area that includes blocks 5-6-7-10-11 is prolific in gas. This is supported by Egypt’s giant gasfield, Zohr with 30tcf, that lies just south of block 11, with geology similar to Glaucus, Calypso and Cronos-1. That is why Eni/TotalEnergies are now proceeding to drill a further prospect in block 6, Zeus-1, while ExxonMobil has continued its exploration in blocks 5 and 10. Cronos-1 has increased prospectivity, with more discoveries possible.

The EU has been making it abundantly clear that it needs new gas supplies this decade so that it can replace Russian gas, but not beyond 2030. Its official position is that it will be reducing gas consumption as we approach 2030 and beyond, in line with its target to achieve net-zero emissions by 2050. Gas consumption in the EU has already declined by about 11 per cent year-on-year, mostly as a result of the exorbitant prices.

This is clearly spelt-out in the recent MoU signed between EU-Egypt-Israel, the term of which is restricted to 2030, without provisions to extend it.

I believe this position will be challenged in a few years when it is realised that renewables and hydrogen alone cannot provide Europe’s energy needs reliably.

But right now this is the official EU policy and it discourages oil companies and institutional investors from investing in long-term projects that depend on supplying the EU with gas.

Global gas demand is on the increase. Based on currently known policies, the International Energy Agency and BP expect global gas demand to increase by 25 per cent by 2050, with most increase needed to supply energy to the growing populations and economies of Asia. In addition, based on the current and expected rate of consumption, about half of global gas reserves will be consumed within 20 years.

That means that the world will need more gas discoveries to feed this future demand, even with climate change action accelerating.

As a result, even if Europe’s gas demand declines, there will be future markets for Cyprus and East Med gas in Asia. But this requires overcoming the challenges that so far have prevented its exploitation.

The greatest challenge to the development of Cyprus gasfields are the continuing threats by Turkey, as recently acknowledged by Cyprus foreign minister, Ioannis Kasoulides. It did not take long after the announcement of the Cronos-1 discovery for Turkey’s foreign minister Mevlut Cavusoglu to step in and forcefully state Turkey’s claims and demands.

However unreasonable these are, and despite the fact that these are not compliant with international law, they are seen by investors as posing a risk to the multi-billion-dollar investments required to develop these gasfields. With Turkey having demonstrated repeatedly that it is quite prepared to use its navy to enforce such demands, it deters investors from taking such a risk.

The other is EU’s policies on the future of gas in Europe that I described earlier.

One question that is often asked is: given these challenges, why are the international oil companies (IOCs) continuing exploration and drilling in Cyprus EEZ?

These companies have long-term horizons. They operate in many parts of the world and key to their operations – and their market value – is successful exploration to maintain healthy reserves portfolios. Depending on market conditions, they select and develop their most promising discoveries, leaving the rest until their turn comes.

Given the situation in the region, and global gas demand needs, I expect that – unless geopolitical change comes earlier – the turn of East Med and Cyprus gasfields will eventually come later this decade.

Key to overcoming the problems in the region, and to advance Cyprus inalienable right to develop its gasfields, is a solution of Cyprus problem. Presidential elections in both Cyprus and Turkey next year, will provide the new presidents with new mandates. For Turkey the critical issue is sorting out its dire economic problems, but also redefining its future role within the evolving new world order. This will require closer realignment with the EU, the US and Nato. Solution of the Cyprus problem would remove a serious barrier in these relations, particularly with Turkey’s biggest economic partner: Europe.

In an interview early August with CNA, Ursula von der Leyen spoke about energy cooperation between the two communities. She commented on possible confidence-building measures, saying that “an agreement between the two communities on the exploitation of hydrocarbon resources in the Cypriot EEZ…can start a wider discussion on energy management in Cyprus.” Post-election, this issue will return and it will need to be addressed by the new president.

Such developments could help open the way for the IOCs to revisit plans to export Cyprus gas to the Asian markets. This could be done by expanding Egypt’s existing LNG plants, or, with more discoveries, bringing back the idea of an LNG plant in Cyprus.

It could also open the way for a pipeline from the Cypriot gasfields to supply the needs of the whole of Cyprus with the cheapest natural gas compared to other options. An offer of natural gas to Turkish Cypriots could contribute to the solution.

Should geopolitical challenges posed by Turkey be overcome, a fast-track option for Eni/TotalEnergies is to tie block 6 discoveries to the nearby Zohr gasfield in Egypt so that gas can then be piped to Damietta LNG for liquefaction and export. This could expedite development of gas discoveries in block 6, and also make-up for the 20 per cent shortfall in Zohr gas production as a result of water-breakthrough problems.

Dr Charles Ellinas, @CharlesEllinas, is a senior fellow at the Global Energy Centre of the Atlantic Council